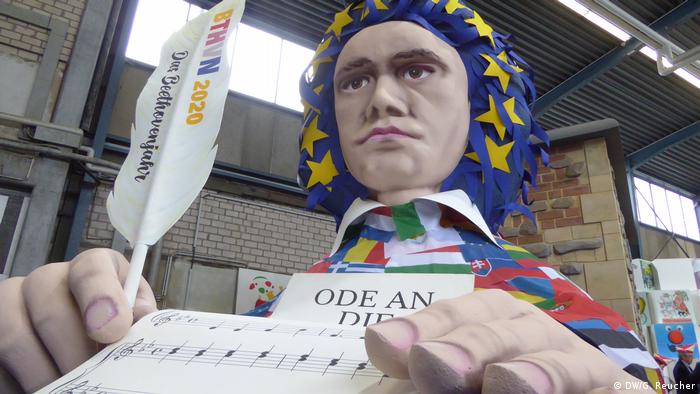 A stern-looking Beethoven figure wearing a coat made up of the flags of the EU member states, holding a quill and a piece of paper with the musical notes to the "Ode to Joy" towers on four Carnival floats that are part of the traditional Rose Monday parades in Cologne, Düsseldorf, Bonn and Aachen.

"All people become brothers: that line from German poet Friedrich Schiller's ode connects people across borders," says Holger Kirsch, who heads the Rose Monday parade in Cologne. Beethoven's ideas of freedom, equality and fraternity fit in with Carnival, he says, explaining that beneath their various wigs and costumes, people are all the same, and "that is what Carnival stands for."

Europe is the common denominator

The four cities' Carnival festival committees got together with the cartoonists who design the floats in Cologne and with Jacques Tilly, the caricaturist responsible for devising floats for the parade in Düsseldorf. They agreed on a design that would focus on what the composer stands for today. 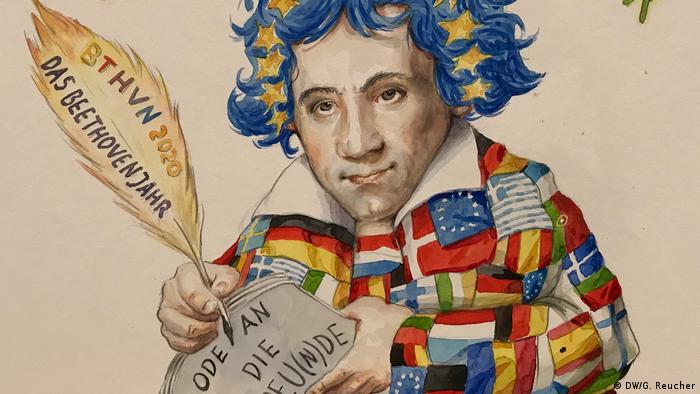 Draft drawing for the joint floats

After all, they argued, Beethoven was a political, freedom-loving personinspired by the Enlightenment. "It's about the man who wrote the Ode to Joy that today is the European anthem," said Tilly, adding that the artists portrayed Beethoven as a "great European."

More Beethoven at the Bonn and Aachen parades

The Beethoven Anniversary Society in the composer's home town, Bonn — he was born in the small city on the Rhine River in 1770 — has yet another take on Beethoven. In its events hall, the society proudly displays a 'Roll over Beethoven' statue of the composer holding a guitar like a rock star. The figurine has been on a Carnival float before, and it is part of the parade again this year, says the society's commercial director, Ralf Birkner. Members participating in the event will wear wigs and red scarves, Beethoven-style, Birkner told DW. Other Carnival groups also plan to dress up as Beethoven, or giant clefs to honor the anniversary. 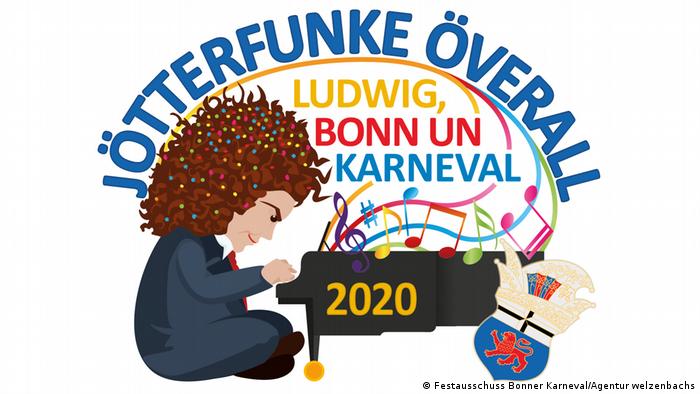 Growing up in Bonn, Ludwig van Beethoven never saw a Carnival parade like the colorful present-day spectacles. When the first organized parade snaked through Cologne in 1823, the composer had already been living in far-away Vienna for a long time.

He did, however, compose music for a courtly masked ball, a form of entertainment seen as the forerunner to Carnival celebrations: "Music for a Ballet of Knights" premiered in 1791.

Schroeder, Beethoven and a toy piano

"Sparks of Divinity all over — Ludwig, Bonn and Carnival" is this year's overall Carnival motto in Bonn, where the composer was born and spent the first 22 years of his life. The official Carnival logo shows Beethoven bent over the piano as a child — a drawing strangely familiar as it echoes Schroeder, a character in the Peanuts cartoon series who adores Beethoven and is always seen bent over his toy piano. 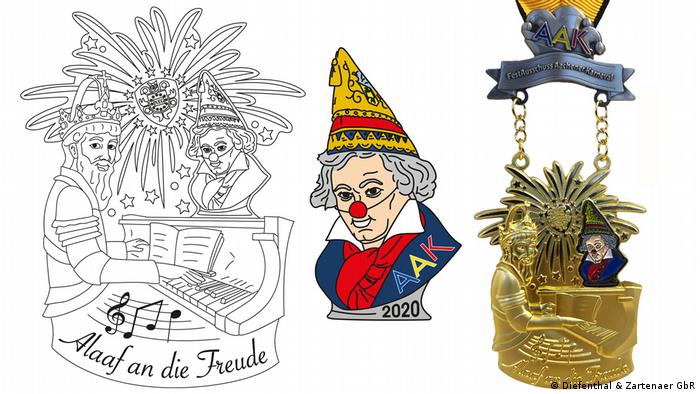 The Carnival Festival Committee in Aachen also shows 9th century Emperor Charlemagne at the piano, watched over by a Beethoven bust. Many historians call Charlemagne "one of the first Europeans" because he united most of western and central Europe.  The International Charlemagne Prize of Aachen has been there every year since 1950 for services to European unification.

The flying fiery candles may be missing, but conductor Francois-Xavier Roth is nonetheless taking a leaf out of Beethoven's book with unpredictable and provocative performances based on the composer's own music series. (12.02.2020)

It's starting again! On February 20, the street carnival begins in Cologne. That means six days of non-stop partying. Here's a guide on what to wear, where to go and how to survive it. (18.02.2020)