Spanish police have conducted raids on Catalan regional government offices and arrested at least 12 people. Madrid is cracking down on unauthorized Catalan plans to hold an independence referendum on October 1. 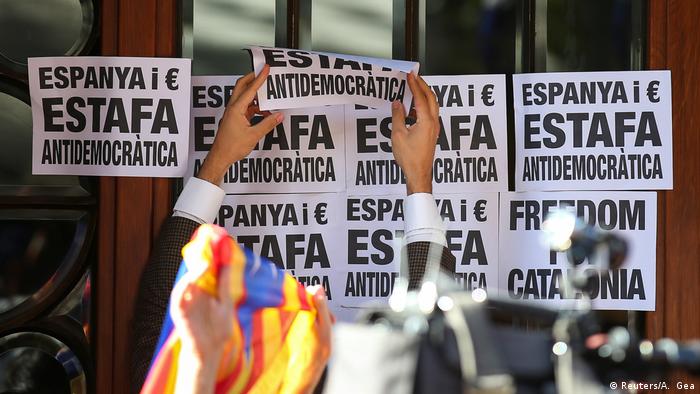 Protesters responded to the arrests with placards calling Spain 'anti-democratic'

Spain's Guardia Civil conducted raids on multiple Catalan government offices on Wednesday, in an intensifying crackdown on the regional government ahead of a planned referendum on independence which Madrid says is illegal.

Police arrested at least 13 people from the regional government in Barcelona, including Josep Maria Jove, secretary general of economic affairs, and an aide to Catalan vice president Oriol Junqueras.

The raids targeting the region's economic and foreign departments confiscated material for the planned October 1 referendum. Police are reported to have seized almost 10 million ballot papers. Spain's Interior Ministry said polling station signs and documents for voting officials were also found by police in a small warehouse outside Barcelona.

Thousands of people have flocked to the Gran Via, a Barcelona high street near Jove's office, to protest the development, chanting "independence" and "we will vote." 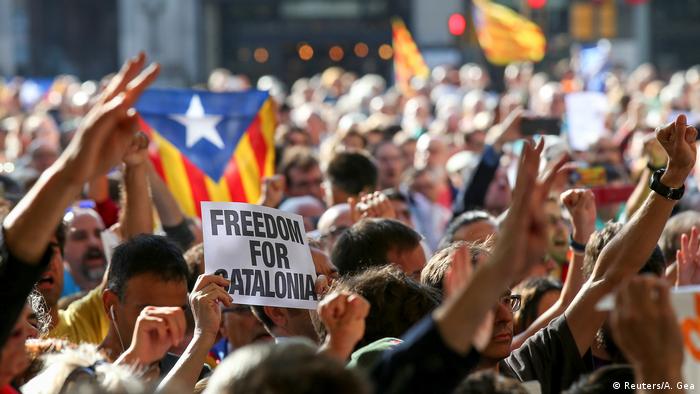 Thousands took to the streets in protest on Wednesday

The Catalan National Assembly (ANC), an influential pro-independence organization, has also urged Catalans to take to the streets in protest.

"Let's go out to defend our institutions in a non-violent way. They made a big mistake, we wanted to vote and they declared war," the group's president, Jordi Sanchez, said in a statement.

The central government and Supreme Court have called the independence referendum unconstitutional and illegal.

Prime Minister Mariano Rajoy justified the raids at a parliamentary session on Wednesday, saying police action was based on the decision of a judge. Every democracy has an "obligation" to abide by the rule of law, he said.

"I think we are acting with reason, moderation and proportionality," Rajoy told lawmakers in Madrid. "Spanish law has to be obeyed," the premier said. "The best course of action is to reverse this nonsense which leads nowhere."

Later on Wednesday, Rajoy called on regional leaders in Catalonia to call off the referendum.

"Don't go ahead. Go back to the law and democracy," said in a televised speech. "This referendum is a chimera."

The FC Barcelona soccer club has also weighed in on the argument. In a statement today the club said: "FC Barcelona, in remaining faithful to its historic commitment to the defense of the nation, to democracy, to freedom of speech, and to self-determination, condemns any act that may impede the free exercise of these rights."

Tensions between the central government and Catalonia are heating up as regional authorities vow to press on with the vote.

On Tuesday, several hundred Catalan mayors were forced to appear before prosecutors.

More than two-thirds of the autonomous region's mayors have said they will facilitate the vote and allow municipal buildings to be used, in violation of Madrid's orders.

The mayors and other regional officials face possible arrest if they move forward with the referendum.

According to a poll conducted by the regional government in July, 49 percent of Catalans were against independence and 41 percent were in favor. However, more than 70 percent said they wanted a referendum to be held to finally settle the issue.

Catalan separatists have officially launched their campaign for an independence referendum. The region has also said it will stop sending financial accounts to Madrid to prove public funds aren't going to the referendum. (14.09.2017)