Judges in Madrid have suspended a law passed by Catalonia's parliament which allows a public vote on independence to proceed. The Constitutional Court's decision means the ballot, slated for October 1, could be delayed. 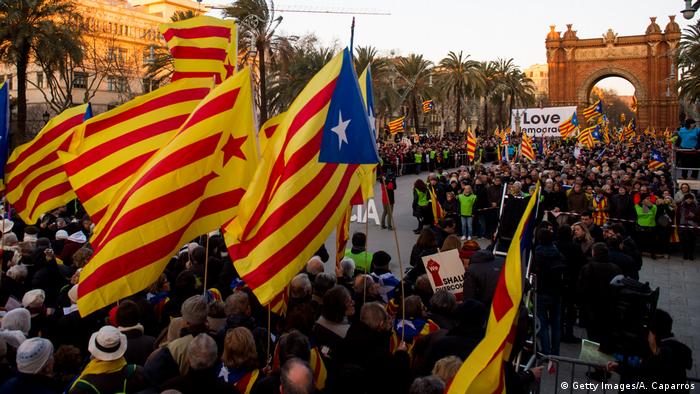 Spanish media reported the court's decision late on Thursday, a day after MPs in the northeast autonomous region of Catalonia approved a law legitimizing a new public vote to decide whether to break away from Spanish rule.

The decision by the Constitutional Court in Madrid suspends the referendum legislation while judges consider arguments that the vote breaches the country's constitution, according to court officials.

The suspension lasts for five months and throws into question whether the vote will proceed. However a previous referendum was held three years ago despite being overruled by the top court.

Catalan President Carles Puigdemont insisted later on Thursday that neither central Spanish authorities nor the courts could halt their plans.

Terror attacks leave Barcelona and Madrid at odds, as ever

Spain's Prime Minister Mariano Rajoy said earlier on Thursday he had appealed to the court to declare the referendum illegal as the constitution states that Spain is indivisible.

Wednesday's vote on secession from Spain passed comfortably, with 72 pro-independence MPs backing the "referendum bill" after more than 11 hours of impassioned debate. Eleven lawmakers abstained from voting, while 52 opposition members walked out in protest before the vote was even taken.

Over the past decade, successive Catalan governments, headquartered in Barcelona, have led popular campaigns for independence from Madrid, arguing that the wealthy region pays an inordinate amount in tax to subsidize poorer areas of Spain.

Catalonia generates a fifth of Spain's gross domestic product and its population of some 7.5 million people is proud of their cultural heritage, language and traditions.

The region held a first independence referendum in 2014, despite opposition by Madrid, which was won by "yes" campaigners but with a low turnout. Catalan leaders had said the results of any new vote would be binding.

Polls show the independence debate has split the region, with those preferring to stay united with Spain slightly outnumbering 'independentistas'. A majority of Catalans do want the right to hold a referendum, however.

Thursday's Constitutional Court decision came hours after a heated exchange in the Catalan parliament between those who are for and against independence, with both sides battling to interpret what exactly a "Yes" result would mean in the new vote.

Earlier on Thursday, Spain's top prosecutor said he was planning to launch criminal lawsuits against Catalan officials responsible for scheduling the October 1 ballot. He said the officials could be charged, among other things, with disobedience, abuse of power and embezzlement.

Spain vows to cut off funds to Catalonia over independence vote

Spain's central government says Catalonia must prove it is not using state funds to prepare for an independence referendum. Madrid is to conduct weekly audits to ensure no taxpayer money goes towards paying for the vote. (21.07.2017)