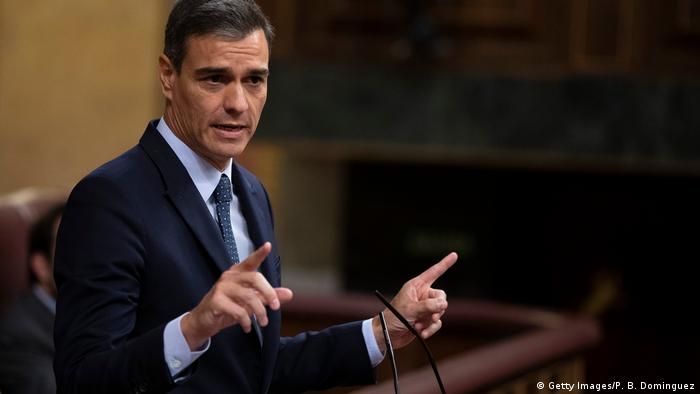 Spanish Prime Minister Pedro Sanchez unveiled his new Cabinet on Sunday, pledging to lead a coalition that "will be informed by different ideas but will go in a single direction."

"It's a plural government, a coalition government whose firm intention is unity," he told reporters after formally submitting the list of 22 ministers — 11 men and 11 women — to King Felipe VI.

Sanchez was sworn in as prime minister earlier this week after his Socialist party forged an agreement with far-left Unidas Podemos. Theirs will be Spain's first governing coalition since the country's return to democracy more than four decades ago.

Who's in the new lineup?

The Cabinet has been expanded from 17 posts to 22, and will be equally split between men and women.

Podemos leader Pablo Iglesias will be one of the government's four deputy leaders. Four other Podemos politicians have also been appointed to Cabinet positions.

The ministers are due to take their oath of office before the king on Monday, ahead of the first Cabinet meeting on Tuesday.

Sanchez managed to secure parliament's backing for his new left-wing government by agreeing to hold talks with the regional government in Catalonia, which is seeking independence from the rest of Spain. A failed independence bid in 2017 opened up deep divisions and plunged the country into a persisting political crisis.

The prime minister told reporters Sunday that citizens want "a Spain that builds bridges, not a Spain of vetoes and ruptures … a Spain of coexistence, and not a Spain of discord."

Parties on Spain's right, including the far-right Vox, are outraged by the Socialists' plan to negotiate with Catalonia. Thousands of Vox supporters staged protests in Madrid and other cities on Sunday, condemning what they called a government "in the hands of separatists."

Spain's top court has said Catalan jailed separatist leader Oriol Junqueras will not be granted legal immunity. The EU's top court had ruled that — as a member of the European Parliament — he should be entitled to it. (09.01.2020)

The Socialists came in first in Spain's general election, but fell short of a majority for the second time this year. Tensions over Catalonia dominated campaigns, prompting a surge for the far-right. (11.11.2019)