Palace intrigue surrounds the corruption trial of Spain's Princess Cristina, her husband and 16 other defendants. Charges against her are brought not by state proescutors but by anti-corruption advocates. 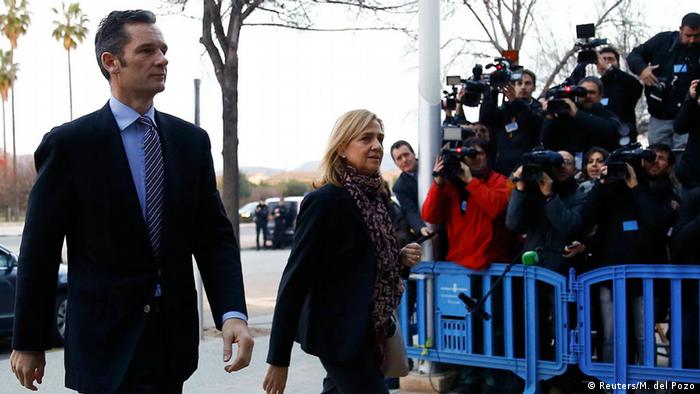 A landmark corruption trial against Spain's Princess Cristina and her husband began Monday as media outlets from around the world descended on a makeshift court house in Palma de Mallorca.

The 50-year-old is the first member of Spain's royal family to face criminal charges since the monarchy was restored following the 1975 death of dictatorial General Francisco Franco.

Chief among the allegations is that her husband, former Olympic handball medalist Inaki Urdangarin, embezzled public funds through a foundation he once chaired.

Through the Noos Institute, a charitable organization, based in Palma, which Urdangarin founded and chaired from 2004 to 2006, the 47-year-old and his former business partner Diego Torres are accused of embezzling 6.2 million euros ($6.7 million) in public funds paid by two regional governments to the organization to stage sporting and other events.

He is accused of using his royal connections to secure inflated contracts without competing bids and siphoning off some of the money into Aizoon, a firm he jointly ran with his wife Cristina to fund a lavish lifestyle. 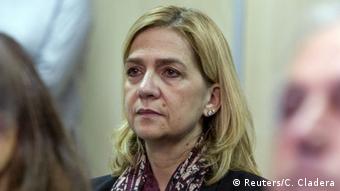 Cristina listens during the opening of her corruption trial

Cristina has been charged with tax evasion while her husband is accused of the more serious crimes of embezzlement, influence peddling, document falsification, money laundering, forgery, breach of official duty and tax fraud.

The charges brought against Cristina and the other defendants - 18 in all - come not from state prosecutors, who have always refused to bring charges, but from anti-corruption campaigners, which Spanish law allows.

Soon after the trial opened defense lawyers moved for dismissal. They argued that Spanish law allows an accused to escape trial if the victim of the crime does not back the charges. In this case the alleged victim is the state.

"All citizens are equal before the law and as a result anachronistic doctrines cannot be applied" that would "privilege" the princess, she said.

Lopez added that dropping the case against Cristina would damage Spain's justice system.

Inevitably, perhaps, the case has spawned considerable palace intrigue. King Juan Carlos, who many believe knew full well what was going on, abdicated in 2014 clearing the path for his son Felipe, in an attempt to try to revive the scandal-hit monarchy.

King Felipe VI ordered an external accounting of the palace books and stripped Cristina and her husband of their royal titles, although she remains sixth in line to the throne.

Cristina faces up to eight years in prison if convicted, while her husband could get more than 19 years.

John Bolton, former National Security Advisor for Donald Trump, calls for the fall of the Iranian regime in DW interview 2h ago