Princess Cristina of Spain has been acquitted of some of the corruption charges brought against her. However, the sister of the newly crowned king could still face trial for tax fraud. 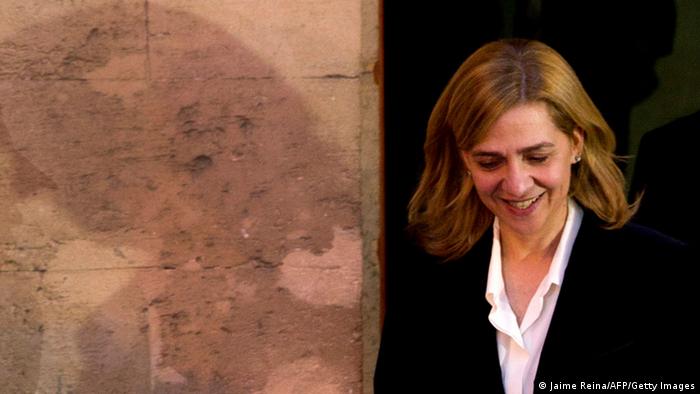 The High Court of Palma de Mallorca dropped some of the corruption charges against Princess Cristina on Friday. While the 49-year-old sister of the Spanish king no longer faces charges of money laundering, the court decided to uphold tax fraud charges, which stem from business dealings with her husband, former Olympic handballer Inaki Urdangarin.

"We are going to continue with the defense because we believe that there are not sufficient grounds to bring any kind of accusation," the princess' lawyer, Miquel Roca, told reporters on Friday.

Cristina could become the first member of the Spanish royal family to stand trial if a separate investigating judge also upholds the tax fraud charges.

Authorities are investigating Urdangarin for embezzling 6 million euros ($7.4 million) in public funds and using his connections to win public contracts through his non-profit organization Noos Foundation, which he headed from 2004-2006. Prosecutors also allege that he committed fraud, tax evasion and falsified documents.

Cristina sat on the Noos board at the time that her husband chaired the NGO.

Both Cristina and her husband have denied any wrongdoing.

The judge in the case, Jose Castro, opened his investigation into the couple three years ago. In June, prosecutors appealed the charges, citing a lack of evidence.

Cristina's father, King Juan Carlos, abdicated his throne to his son, King Felipe VI, earlier this year in a surprise move. After years of enjoying wide respect for his role in transforming the country from a dictatorship to a democracy, the aging king's popularity suffered in his final years. In 2012, he drew popular criticism for an elephant-hunting safari in Africa during a hard-hitting economic recession in Spain.

The King of Spain has been ousted as a patron of the country’s World Wildlife Fund branch because of an elephant-hunting trip he made to Botswana. (21.07.2012)

US President Joe Biden signs series of orders, including rejoining Paris climate accord 51m ago