The former monarch abruptly left Spain after probes into his involvement in financial wrongdoings heated up. His whereabouts remained unknown, until now. 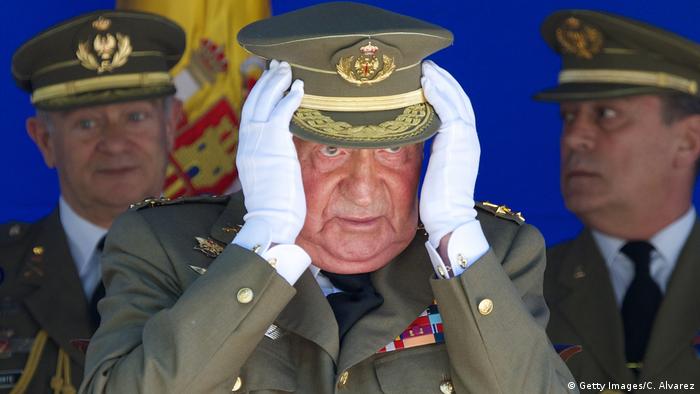 Former monarch Juan Carlos I of Spain has been in the United Arab Emirates since he left his country amid a growing financial scandal, the Spanish royal household said Monday.

The announcement ends two weeks of speculation into his whereabouts, after the former king said he was leaving Spain but did not disclose where he was heading.

Investigators in Spain and Switzerland have begun investigating Carlos in relation to possible financial wrongdoing.

The 82-year-old "traveled to the United Arab Emirates on August 3 and he remains there," a spokesman said without giving further details.

The declaration confirms the suspicion of the pro-monarchy Spanish daily ABC that the king was residing there. Other media outlets had suggested the former monarch might be staying in Portugal, where Carlos spent part of his youth, or the Dominican Republic.

Read more: Juan Carlos, a once admirable king in tatters

A Swiss prosecutor's office is investigating a historic bank transfer made from Carlos to Danish businesswoman Corinna zu Sayn-Wittgenstein-Sayn, who he was having an affair with.

Media reported that the late Saudi king Abdullah is said to have deposited €85 million ($100 million) into a bank account that the former Spanish King had access to. He then transferred €65 million from this account to zu Sayn-Wittgenstein-Sayn.

The woman maintains the money was a gift.

At the same time, prosecutors at Spain's Supreme Court are looking into claims that Juan Carlos received kickbacks for a Saudi high-speed rail contract that was awarded in 2011 to a consortium of Spanish companies. The 450-kilometer (280-mile) link between Mecca and Medina was inaugurated in 2018.

A kickback is an illicit payment made to someone in return for facilitating a transaction or appointment.

A reign of controversy

Juan Carlos I took the throne two days after dictator Francisco Franco died in 1975, and is credited with helping his country's transition to democracy.

Initially a popular figure, his reign began to unravel in 2012 after a lavish trip to Botswana included a photograph of the then king in front of a dead elephant with a rifle over his shoulder, as Spain suffered a recession at home.

Since then, the royal house has been embroiled in other controversies, including financial crimes involving Juan Carlos' daughter Cristina, who is also the sister of the current king Felipe.

After initial reports of the Swiss probe began to emerge, earlier this year, Felipe removed his father's palace allowance and renounced the inheritance.