Madrid taxi drivers blocked the vital Paseo de la Castellana boulevard as part of an ongoing protest against ride-hailing apps. Police were forced into unusual measures to halt the disruption. 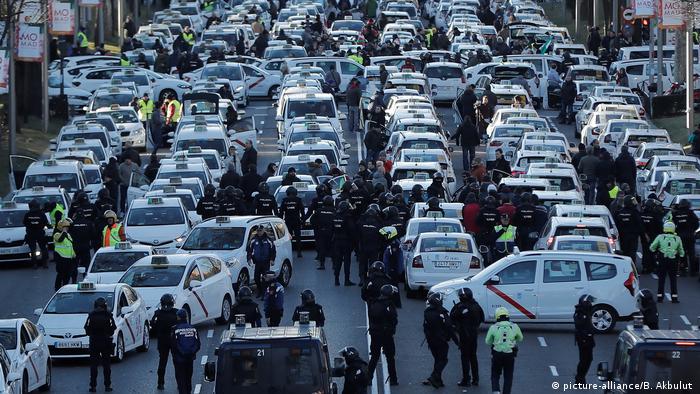 Dozens of Madrid's anti-riot police descended on the central Paseo de la Castellana to help commuters with the traffic jam. They used cranes to remove taxis blocking the main boulevard, which runs north to south through the Spanish capital.

The open-ended strike began on January 21. Madrid's taxi drivers say that Uber and Cabify's services offer rides that often undercut taxi prices and have made it impossible to compete.

They are demanding similar measures to those announced for Barcelona last week. Drivers managed to get the Catalan government to impose new regulations. But Madrid's regional government chief, Angel Garrido, criticized Barcelona's stance saying the city was "heading to the Middle Ages."

Read more: Are we seeing the end of the You economy?

Catalonia's regional authorities proposed that ride-hailing services only be allowed to be reserved a short time in advance and prohibited them from being hailed on the street.

Though the rule is set to go into effect on Tuesday, negotiations were still ongoing on Monday, in a last-ditch effort by companies to save their operations in Spain's second-largest city.

In a Tweet on Monday, Cabify said that the Generalitat's regulation would mean their "expulsion from Barcelona in order to satisfy the most radical segment of taxis, prompting more stoppages and less liberty." The company encouraged users to sign a change.org petition on its behalf.

Uber echoed Cabify's claim that the new rule would force them out of Barcelona and both companies have said that some 3,500 jobs would be at risk.

Self-employed drivers working for the mobile platforms took to the streets on Monday, blocking parts of Barcelona's main thoroughfares ahead of Tuesday's decision and in an effort to persuade de Catalan government to reverse course on the regulation.

Spain's government has been caught in the middle of the fight between taxis and mobile-hailing apps. In September 2018, the parliament agreed to limit the licenses for ride-hailing services to one for every 30 licenses.

Although it was an apparent win for taxi drivers, the rule will not go into effect for four years, giving the ride-hailing apps time to fight the regulation.

The Socialist (PSOE) government of Prime Minister Pedro Sanchez has sought to let regional authorities resolve the disputes themselves.

This has drawn the ire of the conservative Popular Party (PP), whose secretary-general Teodoro Garcia-Egea called Sanchez "a coward" on Monday. Garcia-Egea denounced Barcelona's move and insisted that Spain's digital transformation "could not be resolved with less liberty."

In response, parliament spokeswoman of PSOE defended the government stance, explaining that "Madrid does not face the same realities as Catalonia or Asturias" and therefore each autonomous region must have the freedom to enact their own legislation.

Spanish taxi associations have demanded stricter enforcement of a law that limits the issuing of new licenses to Uber and Cabify. Representatives from the ride-sharing apps say the taxis just want to keep a "monopoly." (31.07.2018)