Spain is in party mode despite a steep rise in coronavirus cases | Business | Economy and finance news from a German perspective | DW | 19.08.2021

COVID infections are steeply rising in Spain after the government has reopened businesses to shore up a nascent recovery. As Stephanie Müller reports from Marbella, public health care could again reach its limits. 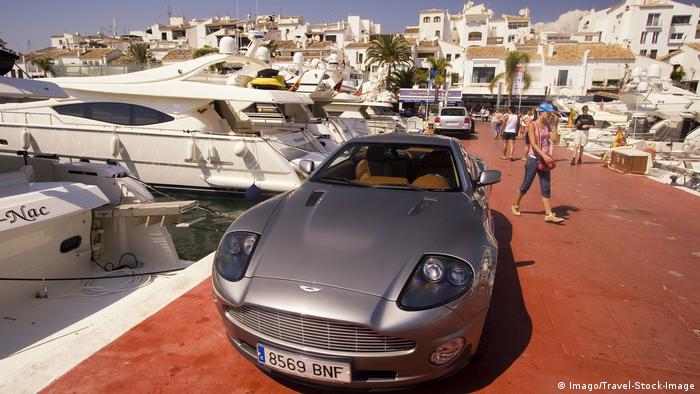 This summer, the rich and beautiful from across the world have been flocking back to Marbella , filling the bars and street cafés of the Spanish luxury resort with people in pin-stripe shirts and evening dresses. The weather is as pleasant as always, and the well-heeled tourists are as detached from ordinary Spaniards as they've ever been.

It's only via television that Spain's worsening COVID-19 pandemic is creeping back into people's minds, but reports of rising infections, even among those inoculated, do not seem to scare anyone anymore. Official figures for Marbella show that about 470 people have got infected with the coronavirus over the past two weeks.

As a fifth wave of infections hits Marbella right during the holiday season, the influx of sunseekers mainly from France, the UK and Germany is compounding the problem of careless young Spaniards reveling in the resort's famous party culture after being locked down for months. It's here, along the Costa del Sol in Spain's Andalusia province, where you probably find the highest number of luxury cars in Europe this summer. 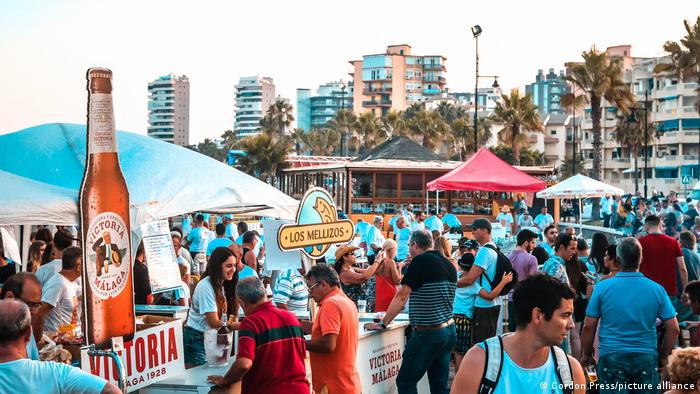 After a long lockdown winter, life has returned to the streets and plazas of Marbella

Hot spot of the super rich

Driving down Marbella's Autovia del Mediterraneo highway toward the Puerto Banus marina is a time-consuming adventure these days. The celebrity port is full of yachts again — owned mainly by Russians and Arabs —  causing heavy traffic and long tailbacks. "No one fully understands why, but after the horrors of last year Spain is booming again," said Tim Wirth, a German lawyer living in the country.

Spain's commercial bank BBVA has estimated that the Spanish economy could grow about 6.5% in 2021 — a growth comeback that was partly fueled by rising sales of holiday homes. As early as last year foreign buyers, notably from Norway and Sweden, were tentatively coming back to the Spanish market, but it wasn't before the first half of 2021 that sales really took off, with high-end home sales rising by 30%.

Unemployment across Spain has also been falling in the wake of rebounding economic activity and the government is hoping to accelerate the upswing with the €69.5 billion ($81.3 billion) it will receive from the EU's Recovery and Resilience Facility over the next five years. With the funding, the socialist government of Pedro Sanchez is planning to make the Spanish economy more innovative. 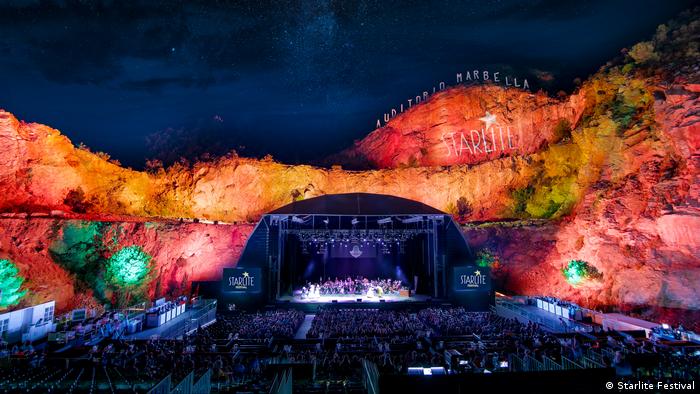 For the time being, though, Spain's primary revenue spinners will remain tourism and cultural events, including sprawling party and nightlife events.

The government in Madrid decided to reopen the economy despite the ongoing coronavirus crisis that has led to the highest number of COVID-related deaths in Europe. 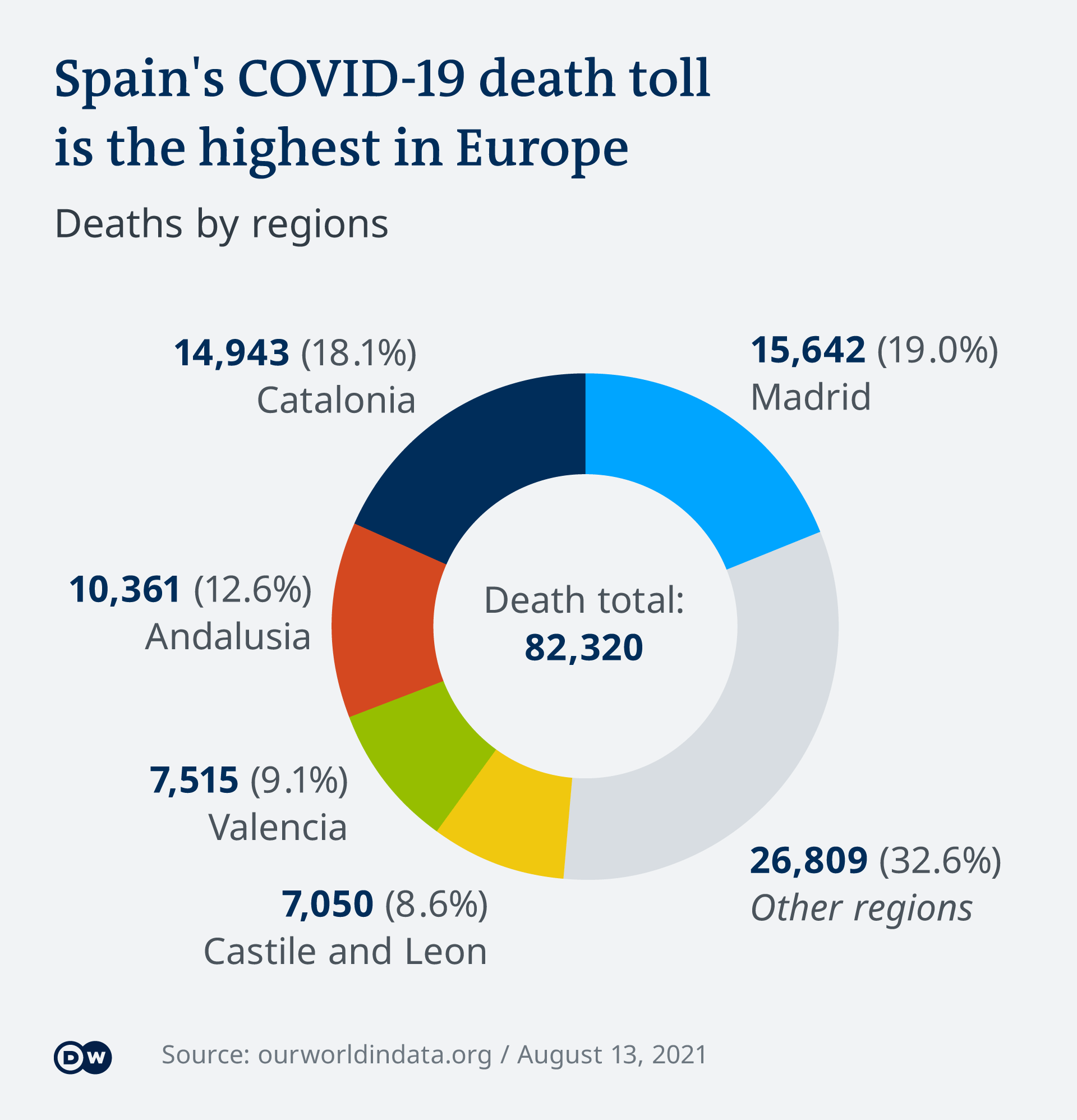 Manuel Villalta, a music composer, believes that Spain is "playing a dangerous game." Living largely isolated in the hills outside of Madrid, he told DW that Germans were in a much better position because they would have "a leader for whom public health is more important than money."

He and most of his friends got vaccinated, he said, but some of them caught the virus nevertheless, which he found unsettling. "We need to remain cautious," he added.

In Madrid, surgeon Angela Hernandez Puente, is eager to dispel her patients' fears of a new surge in COVID cases. A momentary shortage of staff at Spanish hospitals, she told DW, was due to the holiday season in August when facilities were "always short-staffed."

Lawyer Tim Wirth thinks that if Germany's infection numbers were similar to Spain's Angela Merkel "would have locked down Germany immediately." Instead, he told DW, realtors across Spain would enjoy a massive rebound in sales, chasing away all the gloom and doom in the business that had prevailed at the beginning of the year.

The reinstalled freedoms for Spaniards didn't come out of the blue, however. After the central government in Madrid lifted a nationwide state of emergency in May, Spain's 17 autonomous regions and cities are fully in charge of coronavirus policy now.

The landslide election victory of conservative lawmaker Isabel Ayuso has marked a watershed in the country's fight against the pandemic, making a return to sweeping restrictions seemingly impossible. Ayuso won the race for governor of Madrid on the promise of a full reopening of the economy, vowing that with her, "businesses will never be suffering again."

In view of the Spanish vaccination rate of 60%, Ayuso also said she thinks introducing vaccination passport requirements for restaurants and bars are unnecessary before the autumn, if at all. 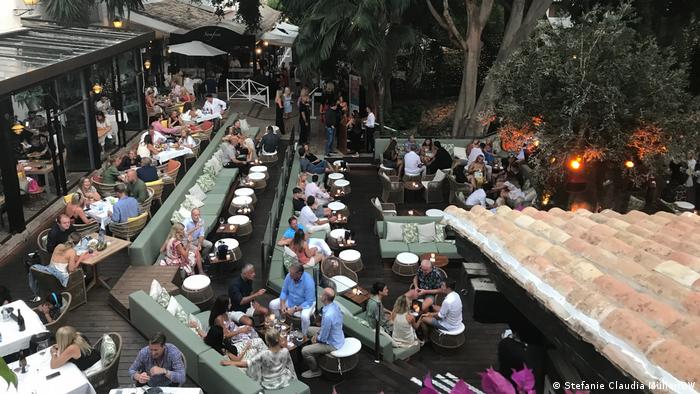 In Marbella, mayor Angeles Munoz, a member of the conservative Partido Popular (PP), is not overly concerned about rising infections in Spain either. At the opening of two new restaurants in Marbella's Puente Romano beach resort, she praised the investor, Spanish star chef Dani Garcia, for continuing to pump money into the high-end restaurants.

Prime Minister Pedro Sanchez, meanwhile, seems forced to play along in the Spanish infections gamble, as the two politicians' anti-lockdown campaigns have boosted PP's political fortunes. According to the latest polls, the party is more popular than Sanchez' leftist PSOE.

The state of emergency gave the Spanish government special powers, confining people to their homes amid a deadly first coronavirus wave. The country's top court says the government overstepped its powers.