The state of emergency gave the Spanish government special powers, confining people to their homes amid a deadly first coronavirus wave. The country's top court says the government overstepped its powers. 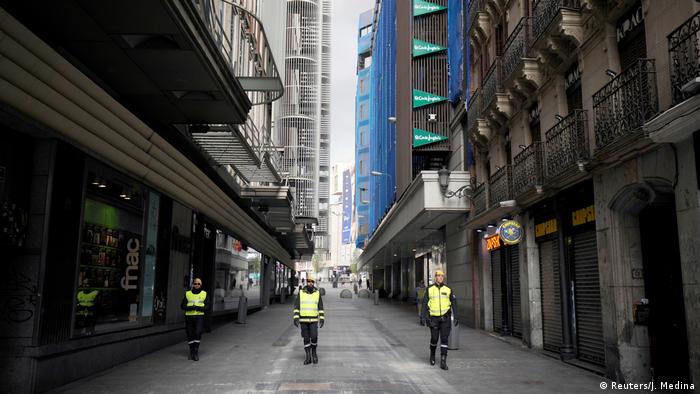 Spain's national state of emergency amid the first wave of the COVID-19 pandemic was partially unconstitutional, Spain's Constitutional Court ruled on Wednesday.

Introduced in mid-March 2020, the state of emergency permitted the government to temporarily suspend civil liberties, confining almost all residents to their homes and shutting down all but essential industries for three months.

The ruling was in response to a suit brought by the far-right Vox party.

The court said that the limitations on movement violated citizens' basic rights and therefore the state of emergency was insufficient to give them constitutional backing, state broadcaster TVE reported. To justify the measures imposed, the government would have had to declare a more serious "state of exception," the court found.

It was a split decision, with six magistrates voting in favor and five against the claim.

The court also rejected part of Vox's appeal, namely "the claim of unconstitutionality directed against an order establishing exceptional measures in relation to wakes and funeral ceremonies."

A statement released by the court said the full content of the judgment, including dissenting opinions, would be released in the coming days.

The coronavirus pandemic in Spain

So far, Spain has registered over 4 million cases and over 81,000 deaths from the coronavirus out of a population of almost 47 million.

In early 2020, it was the second EU member state after Italy to start logging significant caseloads. As the death toll rose in late March, photographs emerged of authorities using an ice rink as a makeshift morgue.

After the first state of emergency was lifted, the government later declared two more, the last of which was lifted on May 9 this year.