Hardline anti-lockdown leader Isabel Diaz Ayuso's victory deals a blow to Spain's governing Socialist Party. But she will need the support of the far-right Vox to rule the capital. 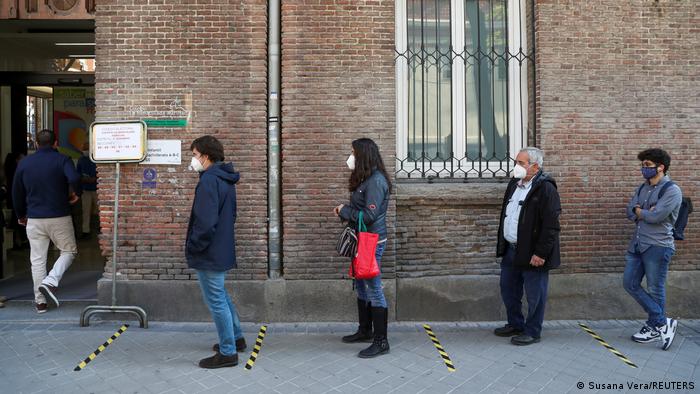 Right-wing incumbent leader Isabel Diaz Ayuso landed a resounding victory in Madrid's elections on Tuesday, with more 95% of ballots having been counted.

The result of the election in the country's capital city and richest region where 7 million people live, out of a total population of 47 million, could have a big impact on Spain's political landscape.

The vote is also considered by many as a comment on the Spanish left-wing government's COVID-19 policies.

Ayuso, who defied lockdown requests from the central government in favor of keeping the economy open, more than doubled her party's showing in the 2019 ballot, winning 65 of the regional parliament's 136 seats.

However, the 42-year-old member of the conservative People's Party (PP) fell short of the 69 seats required for an absolute majority. She will most likely have to rely on support from the extremist far-right Vox party, who gained 13 seats, to form a viable coalition

Polls opened at 9 a.m. local time (8 a.m. GMT/UTC) with a two-hour period mid-morning and one hour before polls close being reserved for elderly voters.

The election was called by Ayuso after she dissolved her center-right coalition in an attempt to broaden her power base.

Spanish daily El Pais reported that some stations were facing long queues shortly after they opened.

A reporter for the newspaper tweeted about the hygiene requirements at the polling stations.

"Voting during coronavirus means: double mask, a squirt of gel just before entering, placing your ID card on the tray without anyone touching it and everything is very well organized. There are queues, but the wait isn't very long."

Ayuso won the support of many Madrid residents for her unorthodox approach to dealing with coronavirus, preferring to keep bars and restaurants open rather than imposing a strict lockdown as the rest of the country did.

Occupancy of intensive care units in the region is higher than anywhere else in Spain and its 14-day infection rate is also above average.

The bitter campaign has split the contending parties into left and right-wing blocs with the parliamentary leader of the far-left Unidos Podemos party, Pablo Iglesias, stepping down from his role of parliamentary party leader to stand for the top job in the region.

Both Ayuso and Iglesias received death threats in the run-up to the vote, with each warning of the dangers of "communism" and "fascism" respectively.