Spanish police have arrested eight nationals accused of traveling to eastern Ukraine to fight alongside separatists. The operation is the first to target EU citizens for taking up arms against Ukraine’s government. 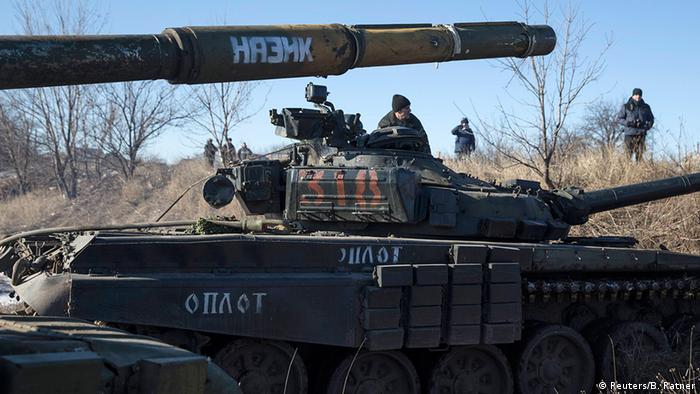 Spanish police arrested eight for fighting alongside separatists in Ukraine's civil war, the Interior Ministry announced on Friday. Last year, the men had joined separatist groups fighting for independence in the Luhansk and Donetsk regions, according to a statement from the ministry.

"Their activities can be considered offenses that compromise Spain's peace or independence, as Spaniards who, while taking part in an armed conflict, violate the neutrality Spain must keep in relation to the international community," the Interior Ministry announced in its statement, released Friday.

The ministry also accuses the men of serving as accomplices in killings and of possessing arms. Some had posted pictures of their weapons online and granted media interviews. According to the website of the national newspaper El Pais, three of the men had served in the military.

The ministry alleged that the men - one of whom has tattoos of Vladimir Lenin and Josef Stalin - took inspiration from the foreign fighters who joined communists and anarchists against Francisco Franco's fascists during Spain's 1930s civil war. In August, a Spanish group had invoked the example of the International Brigades in calling on supporters to go to eastern Ukraine to fight against "the cancer of fascism." Since the February 2014 overthrow of Moscow-backed President Viktor Yanukovych, Russian media outlets have been particularly critical of the right-wing influence in Kyiv's new government, often portraying the transition as a "fascist coup."

Since April, separatists have battled the US- and EU-backed Ukrainian government. The conflict has killed at least 5,800 people and it has dragged ties between Russia, accused of supplying the separatists with weapons and manpower, and Western Europe and the US to their lowest level since the Cold War.

More than 30,000 foreign fighters have taken part in the conflict, according to Ukraine's government forces. A large number come from Russia and former Soviet states, but many have turned up from Israel, Serbia, Brazil and elsewhere.

"These arrests sadden me," Denis Pushilin, a separatist leader in Donetsk, told the news agency AFP on Friday. "I think we are going to demand explanations from Spain over this incident. There are many volunteers in our ranks, the greatest number come from Russia, but there are representatives from Spain, Italy, France ... It is the first time that they have these types of problems."

The arrests come as European countries, including Germany, struggle to keep nationals from leaving to Iraq and Syria to fight alongside the "Islamic State." Earlier this week, Spain, which has its own share of separatist movements, arrested several men accused of recruiting for the group and other extremist factions in the Middle East