In South Sudan the government and the rebels are accusing each other of having violated the cease-fire. Many displaced persons have little faith in the agreement anyway and are refusing to return home. 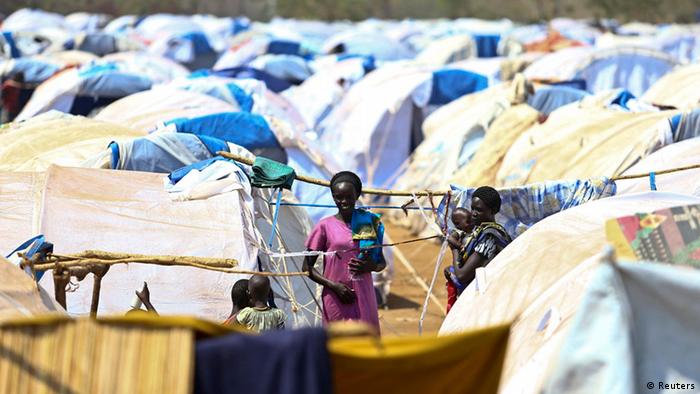 The cease-fire in South Sudan is fragile. The government and the rebels have blamed each other for the violations and insist that they now intend to honor the agreement, while the main victims, the refugees, have little hope that there will be peace. "There is a lot of fear that the fighting may start again," a South Sudanese father tells DW. He and his relatives have just reached a refugee camp in neighboring Uganda. He does not believe that he can return home anytime soon. The government did not want the rebel movement in South Sudan, he said. "And the rebel side also wants power, so they will try by all means to reorganize themselves and try to attack."

Even as the cease-fire agreement was being signed on Thursday (23.01.2014), observers doubted that it would hold. And, indeed, shortly after it took effect, there were new reports of fighting on Friday evening. 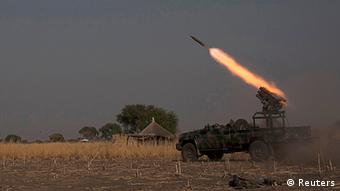 Fighting has been reported since the cease-fire took effect

So many South Sudanese see their fears being confirmed. They continue to flee and take refuge in other countries, such as Uganda. About 47,000 people have made it to safety there. There are 38,000 of them in the Adjumani district alone, which is located in the north of Uganda and borders on South Sudan. So ahead of Ethiopia and Kenya, Uganda has taken in the most refugees from South Sudan so far – an enormous number of people that is nearly overwhelming the United Nations refugee agency UNHCR and non-governmental aid organizations.

The refugees trapped inside South Sudan are also concerned. In the recently fiercely contested town of Bor alone, 10,000 refugees are still too afraid to leave a UN base. In the meantime, there has been a outbreak of measles in the makeshift and completely overcrowded camp, which has left 30 children dead. UN emergency relief coordinator Valerie Amos wants to draw international attention to the plight of the civilians. On Monday (27.01.2014) she travelled to the crisis-stricken country for a three-day visit, during which she wanted to meet with the parties to the conflict. 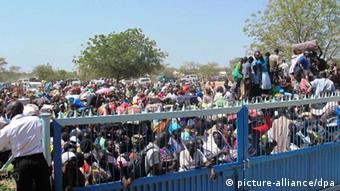 The fear of epidemics is also spreading in Uganda. The Dzaipi transit camp, which is a few kilometers from the South Sudanese border and was only intended for 400 people, now shelters 20,000 people. Most of them are hoping for one thing: to get a piece of land in one of three areas which the Ugandan government has designated for South Sudanese refugees staying a longer period of time. Clearly, almost no one here is considering a return to South Sudan.

Flow of refugees has not stopped

Since the conflict broke out, an average of 1,000 refugees had been arriving at the Dzaipi refugee camp every day. Since the cease-fire, the influx of refugees has slowed somewhat, but UN trucks are still collecting refugees at the border. "Yesterday it was around 197, but those that are coming are coming in much weaker shape, having travelled a lot longer for a lot less money, says Lucy Beck, a UNHCR spokeswoman. In the coming days, she expects many more groups, who had not been able to reach Uganda yet.

South Sudans rebels and the government have signed a peace deal. In an interview with DW, South Sudan analyst Eric Reeves says he hopes the pact will end fighting which has killed thousands of civilians and soldiers. (23.01.2014)

The government and rebels in South Sudan have accused each other of breaking a ceasefire just one day after its implementation. The agreement is supposed to end a month of fighting that has killed thousands. (25.01.2014)