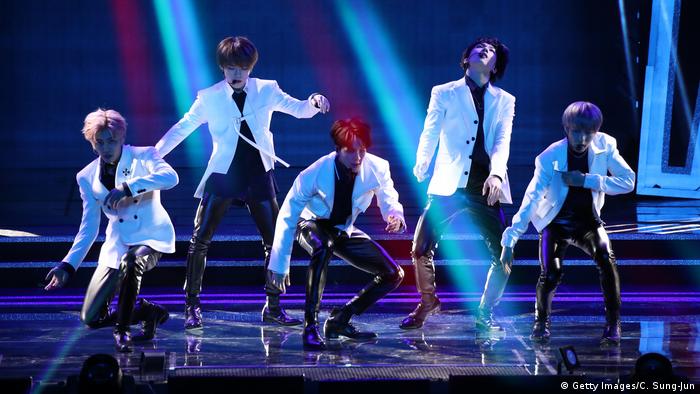 The South Korean pop band BTS recently sat at the top of the Billboard Hot 100 charts with their hit song "Dynamite." Another group, BlackPink, also set a record last month, with 300 million streams on Spotify for their 2018 hit "Ddu-du Ddu-du." The movie "Parasite" stunned the world earlier in the year when it became the first foreign-language film to win the Oscar for best picture.

Now, the South Korean government wants to tap into the popularity of "the Korean wave" to promote the nation's language and culture. If more people are speaking Korean, the thinking goes, then that can only be good for business, the economy and national prestige.

South Korea's Ministry of Culture, Sports and Tourism announced in September that it will spend €63.96 million ($75.2 million) on promoting Korea's "hangul" alphabet, a bump of more than €17 million.

Read more: K-pop's online fan base gets political – unlike its stars

The money is going to be spent on increasing the dissemination of the language overseas and teaching more people. Seoul's Culture Ministry hopes that learning the language will make more people interested in Korean history, art, music, cuisine and other facets of its culture.

Institutes around the globe

The task of sharing the Korean language with more people is being passed on to the network of King Sejong Institutes — the equivalent of Germany's Goethe Institute — that have been set up since 2007 around the world, usually in collaboration with universities or colleges in major cities abroad.

There are 213 of these institutes in 76 countries, including three in Germany, at universities in Berlin, Mannheim and Tübingen.

And to get the word out, authorities here are utilizing what is arguably the nation's most visible export: "hallyu," or Korean pop culture.

"People elsewhere often know about Korea first through our music, our television dramas or films, so it makes a lot of sense to build on that interest and use it to spread the word," Song Young-chae, a professor at the Center for Global Creation and Collaboration at Seoul's Sangmyung University, told DW.

"If you go back 30 or 40 years, then quite a few people knew very little about Korea and Korean culture, including where in the world the Korean Peninsula was located," he said. "Things are certainly different now, but anything that can be done to let the world know more about Korea has to be a good thing."

As well as helping people to better understand modern-day Korea, this sort of education can be used to promote business connections, Song added, while another benefit will be to change some of the perceptions that surround the peninsula.

"If you look at the papers or watch the television news, then most of the coverage on there is going to be about North Korea, about Kim Jong Un, defectors, nuclear weapons and missiles, so it is important that we can communicate more of the positive messages from here," he underlined.

Leif-Eric Easley, an associate professor of international studies at Ewha Womans University in Seoul, agrees that "cultural promotion is a winning strategy for South Korea because it is great for national pride and business.

"There are limits, however," he cautioned. "Because excessive self-regard and government involvement can actually undermine soft power."

South Korean pop culture has had a following in East Asia for several decades, with musicians and the stars of television dramas attracting a sometimes fevered following in Japan, Taiwan, China and Southeast Asia.

K-pop, dramas and films are also hugely popular in North Korea, although not with the government there. Music and television programs are smuggled into the North on memory sticks and are available on the black market and widely shared.

Numerous defectors have said they decided to flee their homeland after seeing the freedom that people in the South enjoyed and images of homes fitted with modern household appliances and supermarkets with plentiful supplies of food.

The fascination with Korean pop culture has now spread worldwide, helped immensely by the evolution of social media.

The global breakthrough was arguably achieved in 2012 ,when Psy's "Gangnam Style" was a viral hit from Seoul to Seattle and Stuttgart. That has been followed up by groups such as BlackPink, Stray Kids, EXO and Monsta X, although the biggest name in South Korean music is still the seven-piece boy band BTS.

Top of the charts

With its latest hit, "Dynamite," BTS became the first all-Korean band to top the Billboard charts, while the video that goes with the track broke three Guinness World Records for viewership.

Korean cinema was also put firmly on the map in February when Bong Joon-ho lifted no fewer than four Oscars, including for best picture, at the 92nd Academy Awards in Los Angeles. "Parasite" made movie history by becoming the first non-English language film to win best picture.

The Culture Ministry is linking up with universities and agencies representing K-pop stars to produce Korean-language educational courses, such as "Learn Korean with BTS." The educational package includes four textbooks and a "sound pen" that plays back the pronunciation of words and phrases. Released on August 24, the initial release was sold out in the US in 20 minutes and in three hours in Japan.

According to the ministry, Korean is the 14th most widely used language in the world, with some 77.3 million native speakers.

Unveiling the campaign, Park Yang-woo, the culture minister, said, "We will work hard to establish the Korean language as one of the important pillars of the 'Korean wave' and promote the use of this glorious language across the globe."

The article has been updated to show that BTS is the first all-Korean band (and not a Korean song) to top the Billboard charts.

At least eight people are dead and others missing after heavy rain swamped Seoul's metropolitan region. The rain began on Monday morning and had intensified by evening. In one part of the South Korean capital, it was the most rainfall in eighty years.