Tensions over the South China Sea have topped discussions at the Asia security forum in Singapore. US defense chief Ash Carter has warned China over any provocative behavior but also proposed cooperation. 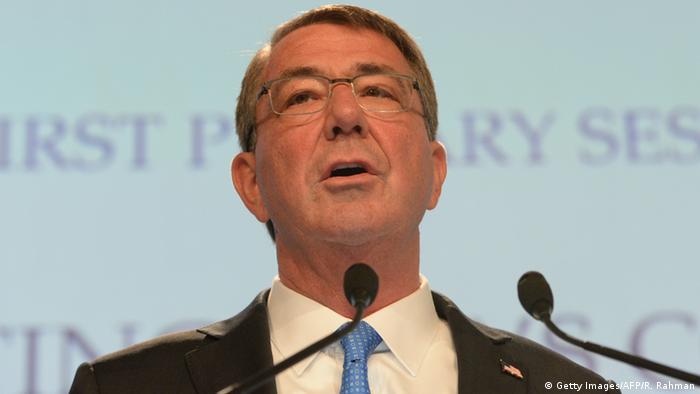 US Secretary of Defense Ash Carter has warned China against any provocative behavior in the contested South China Sea, but he also advocated greater military cooperation with the Asian giant.

Carter said at an Asia security conference in Singapore on Saturday that Beijing risked erecting a "Great Wall of self-isolation" through its building of military outposts on reefs and islands in contested waters.

Attempting to reclaim land and build military outposts in the contested Scarborough Shoal, an outcrop also claimed by the Philippines, would have unspecified consequences, Carter said.

"I hope that this development doesn't occur, because it will result in actions being taken by both the United States and... by others in the region which would have the effect of not only increasing tensions but isolating China," Carter told the Shangri-La Dialogue, a regional security forum in Singapore.

He added that the United States would remain the "most powerful military and main underwriter of security" in the region for decades to come. The Pentagon chief spoke of forming a "security network" in the Asia-Pacific that could include China.

Admiral Harry Harris, the head of US Pacific Command, told reporters that the US wanted to cooperate with all countries in the region but also needed to be prepared.

"The bottom line is this: we want to co-operate where we can, but we just have to be ready as a military to confront them if we must," Harris said.

The admiral noted that there have been few issues with China in the South China Sea recently: "We've seen positive behavior in the last several months by China," Harris said. "I'm encouraged by the activities."

Rear Admiral Guan Youfei, the director of the Chinese office of international military cooperation, said that "China would like to join the US safeguard regional security, but the US should first stop its arms sale to Taiwan and reduce highly frequent close-in reconnaissance against China."

"I believe Carter's remarks are meant to convince other countries in the region to isolate China," Guan said. Reducing "provocative" actions such as military exercises "will help the US play a better role in the region," the Chinese military official said.

The United States regularly conducts so-called freedom of navigation exercises to challenge Chinese claims to the resource-rich waters through which a large chunk of world trade passes.

Those US naval and air exercises - meant also to reassure the Philippines, Vietnam, Malaysia and Brunei, which have claims over the South China Sea - are part of the United States' so-called "pivot to Asia." This is a refocus of US economic, political, military and diplomatic power towards Asia. 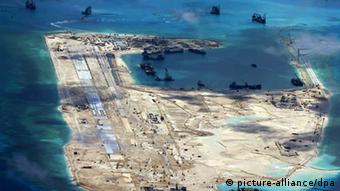 China has built military outposts on several reefs and islands in the South China Sea.

The Shangri-La security summit comes weeks before an international arbitration body is expected to rule on a case against China brought by the Philippines over the contested Scarborough Shoal. China has said it would not recognize the court ruling.

Carter said the ruling provides an "opportunity for China and the rest of the region to recommit to a principled future, to renewed diplomacy and to lowering tensions, rather than raising them."

The US defense secretary added that the US would back international law and the right of the commons. However, the Chinese military official took issue with Washington's contradictions.

"US principles put forward by Carter seem more binding than any other principles. It is an inherent defect when the US urges other countries to abide by United Nations Convention on the Law of the Sea while the US itself has yet to sign the convention," Guan was quoted as saying by the Global Times, a Chinese newspaper close the Communist Party. The website edition of the newspaper issued an editorial on the same topic on Saturday under the title "Asia doesn’t welcome return to Cold War."

"All countries in the region need to recognize that our shared prosperities and the enviable rate of growth that this region enjoys over past decades will be put at risk by aggressive behavior or actions by any one of us," Indian Defense Minister Manohar Parrikar told the forum.

Japanese Defense Minister Gen Nakatani, whose country is reaching out to form tighter political and military relations with Southeast Asian countries, also voiced concern about aggression in the region.

"In the South China Sea, we have been witnessing large-scale and rapid land reclamation, building of outposts and utilization of them for military purposes," Nakatani said. "No countries can be an outsider of this issue."

Tensions in Asia are expected to lead to a military spending spree in the region. IHS Jane's, a defense think-tank, predicts that defense spending in the region will jump nearly 25 percent from 2015 to $533 billion (477 billion euros) in 2020.

The eighth Strategic and Economic Dialogue between the US and China will be held in Beijing next week. Analyst Jin Canrong talks to DW about the current state of the bilateral partnership and the problems afflicting it. (03.06.2016)