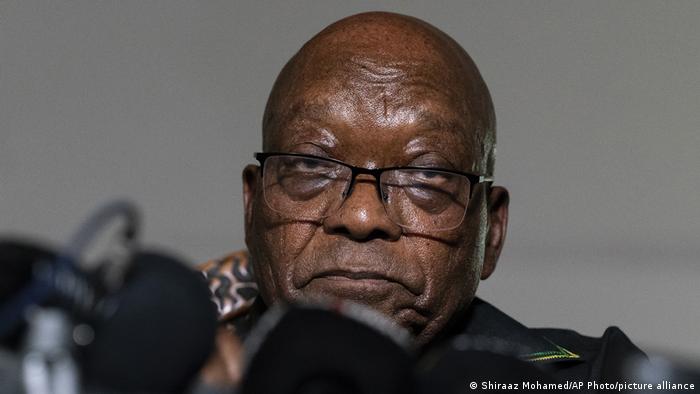 Jacob Zuma was president between 2009-2018, but his tenure was marred by allegations of corruption

Former South African President Jacob Zuma's request to have his sentence overturned was rejected by the country's highest court on Friday.

Zuma was jailed in July on a 15-month sentence for contempt of court after he failed to testify at an inquiry probing corruption during his nine-year rule. The probe has been seen as a test of post-apartheid South Africa's ability to enforce the rule of law, particularly against powerful politicians.

But Zuma was granted medical parole last week for an undisclosed illness, which opposition parties have criticized, saying that proper procedures were not followed.

The 79-year-old former president still wanted his 15-month sentence overturned, arguing that he had been jailed without a trial, that the punishment was excessive and that jail would endanger his health and life.

In a majority 7-2 decision, the Constitutional Court dismissed his arguments as "litigious skullduggery" as Zuma sought to have his prison term set aside.

"The majority emphatically reject any suggestion that litigants can be allowed to butcher of their own will a judicial process which in all respects has been carried out with the utmost degree of regularity, only to later plead the absent victim," Justice Sisi Khampepe said.

Zuma, an anti-apartheid veteran from the ruling African National Congress (ANC), was president between 2009-2018. His tenure was marred by widespread allegations of graft and malfeasance. He has denied all wrongdoing.

He still maintains pockets of support within the ANC and his imprisonment triggered some of the worst riots and looting in South Africa in decades, with more than 300 people killed and thousands of businesses pillaged and razed.

The violence, which current President Cyril Ramaphosa referred to as a "failed insurrection," was also fueled by simmering frustration among largely Black communities living under economic duress.