In a speech Monday, left-wing politician Julius Malema called on country’s black population to “occupy the land” owned by whites. His defiant appeal comes as he faces charges for breaking an apartheid-era anti-riot law. 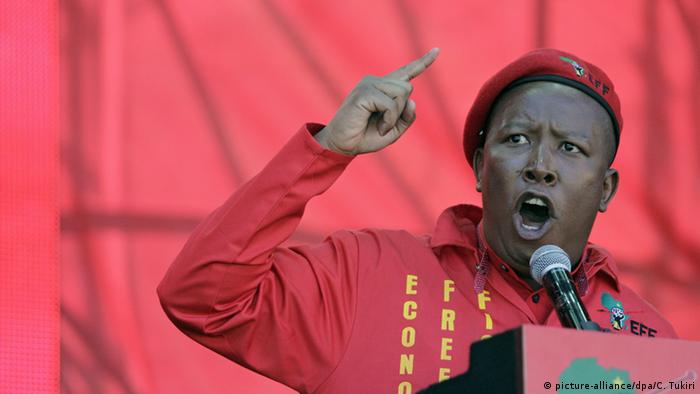 The South African opposition leader Julius Malema renewed his call for blacks to occupy white-owned land, despite the fact that he is facing criminal charges for having made that very appeal this past June.

In a speech to about 300 supporters outside the courthouse where he is soon to stand trial for inciting trespassing, the left-wing politician said that "when a state has failed to give you the land for the past 22 years, it will be irresponsible for me to say continue waiting. That's why I say occupy the land.”

Malema: 'We are not scared of war'

Malema also said Monday that he will urge the Constitutional Court to do away with the apartheid-era anti-riot law under which he is being tried on the grounds that it is unconstitutional. The court has granted him permission to have his trial postponed as he makes his case against the 1956 Riotous Assemblies Act, which legal experts say he may very well win.

The left-wing party to which Malema belongs – the Economic Freedom Fighters party – has won public support with by campaigning against inequality in South Africa and calling for non-violent occupation to redistribute the land.

"They have been living peacefully. They have been swimming in a pool of privilege, they have been enjoying themselves because they always owned or land,” said Malema Monday about South Africa's white, land-owning minority.

The party's supporters have only threatened to stage occupations, however, and have so far not done so.

Land-ownership continues to be a sensitive issue in South Africa since the end of apartheid in 1994.

Malema has also pushed for the nationalization of the country's banks and mines, and is a leading critic of the country's president Jacob Zuma. He was one of the main voices calling for last week's anti-Zuma protests where thousands converged to call for the president's resignation over perceived abuses of state resources.

Julius Malema, leader of the leftist Economic Freedom Fighters party, has been thrown out of the South African parliament after calling Deputy President Cyril Ramaphosa a "murderer." The incident marks a repeat offense. (09.09.2015)

South African opposition leader Julius Malema is taking President Jacob Zuma to court. Zuma has refused to say when he would pay back some of the taxpayers' money spent on refurbishing his Nkandla residence. (07.08.2015)