Seven South African men accused of eating human flesh appeared in court Thursday as angry residents gathered outside. Five people were arrested last month after a man handed himself over to police. 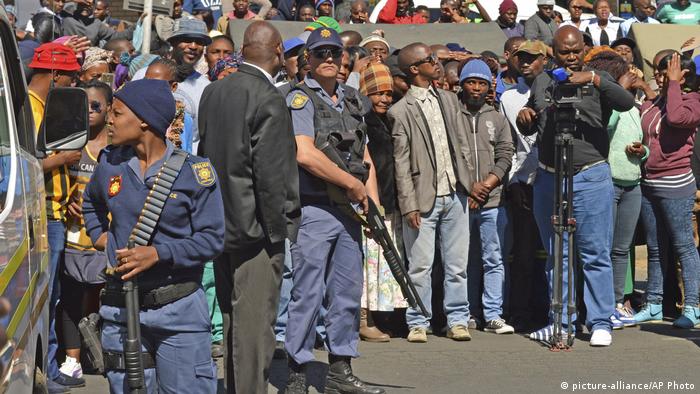 Hundreds of people gathered in front of the courthouse in Estcourt in South Africa's KwaZulu-Natal province in the country's east. They called for harsh sentences for the seven men who are accused of cannibalism.

"They must rot in jail, our children are now scared of going to school," one protester said.

The men, all in their 30s, are charged with murder, conspiracy to commit murder, and possession of human parts.

The men allegedly worked with a traditional healer to kidnap women and rape them before consuming their bodies. They have been linked to the remains of a woman found in Rensburgdrift. All seven have waived their right to apply for bail, fearing public fury.

Five people were initially arrested in August in Estcourt after one man walked into a police station, carrying a bag containing a human leg and hand. He reportedly told police officers he was "tired of eating human flesh."

Two more people have been arrested in the meantime.

There is no direct law against cannibalism in South Africa, but mutilating a corpse and possessing human tissue are criminal offenses.

"This is a very complex case, and more investigations are being conducted," prosecution spokeswoman Natasha Ramkisson told news agency AFP.

The case has been adjourned until October 12.

People all over South Africa are shocked at the brutality of the case.

Talking to DW, Johannesburg resident Prince Dwayz said cannibalism is a criminal act that should be harshly punished. "It's just like murdering somebody - you should go to jail," he said.

Not a South African problem

Sibonakele Nene, a student at the University of the Witwatersrand, warns against using this gruesome incident to perpetuate the stereotypes of Africans being backward.

"I don't think it's a South African problem. Cannibalism has been all over the world," he said.

"So I think we must be careful not to get the hysteria that 'Oh! Something happened in Africa! Ooops! Africans are eating each other now.' No! I don't walk on the street thinking someone is going to eat me."

Scientists have uncovered a set of prehistoric human remains with designs etched into the bones. Researchers concluded that these cannibals not only ate their fellow humans for survival, but for ritual purposes, too. (10.08.2017)

German man back in dock over cannibal website killing

A German ex-police official who was convicted of hacking to pieces a man he met on a cannibalism website is being retried. The first guilty verdict against Detlev G., who says the deceased killed himself, was overturned. (01.11.2016)

The biggest union group in South Africa, COSATU, has held nationwide rallies against corruption in the government. Many are calling for President Jacob Zuma to step down. (27.09.2017)