Social media use evolving in Egypt

Social media played an undeniably important role during the Arab Spring revolutions in 2011. But it's now become part of the standard repertoire of political upheaval - also for the establishment. 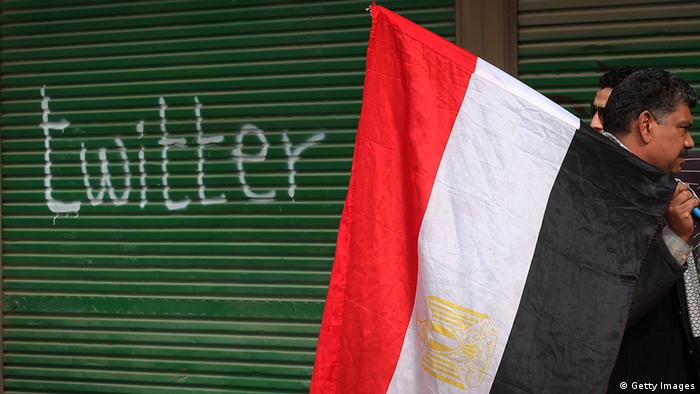 There's no doubt that the citizenry relied greatly on social media to network and organize during the Arab Spring, when areas in the Middle East and North Africa erupted in popular revolt during the early part of 2011. Platforms like Facebook and Twitter were used to call and coordinate protests, and also for sharing information on issues around the pro-democracy movement.

Two and a half years later, unrest in the Arab world continues - and social media has become a mainstay in them. Activists continue to use it, but they aren't the only ones - powerful government personages and agencies are also tweeting up a storm. Meanwhile, technological extensions such as automatic translation tools are breaking down the language barrier and extending the potential reach of social media for social movements in general.

Facebook in particular played an important role in the Arab Spring, with people organizing protests for example over the Facebook page of Egyptian activist Wael Ghonim. Protesters used Twitter to organize protest logistics, providing live updates from the ground and calling for support or backup.

Some commentators - for example, Chris Taylor of the popular tech site Mashable - went so far as to call Egypt's Arab Spring uprising a "Facebook revolution."

Over time, as the role of social media in the Arab Spring continues to be a topic of study and debate, scholarship emerging on the issue has helped clarify what may have been some degree of mythologizing hype. 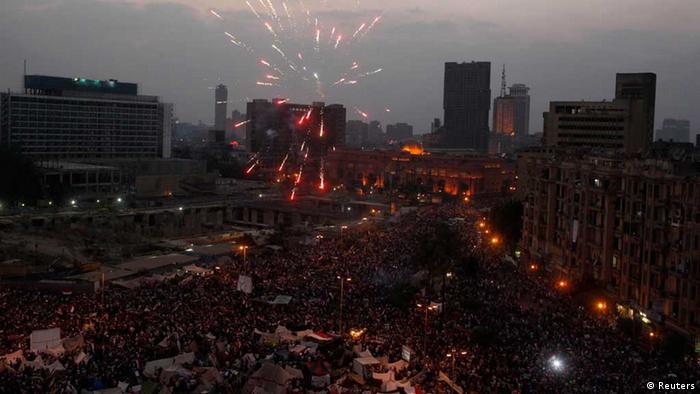 Eira Martens, a research associate with the DW Academy, carried out an empirical study on the role of social media during Egypt's Arab Spring in 2011. She said calling it a "Facebook revolution" would be an exaggeration.

Her research showed that in addition to helping organize protests, social media - in particular shared photos and videos - allowed participants to form a collective identity. This increased a sense of solidarity and helped lower a "fear threshold" that may otherwise have prevented people from taking to the streets.

Another of Marten's findings was that social media helped to compress the time frame of the uprising. "In the Egyptian context, Facebook in particular helped accelerate the protests," Martens said of her research results. "The majority of the social media activists I interviewed believe that it would have taken a few more years to overthrow Mubarak's government," she added.

But by now, those in power have also caught on to the importance of social media in times of social upheaval. In the current unrest in Egypt, prominent politicians have been micro-blogging along with the rest.

Mohamed ElBaradei, a leader of Egypt's opposition movement, has more than 1.6 million followers on Twitter. He tweeted on June 28: 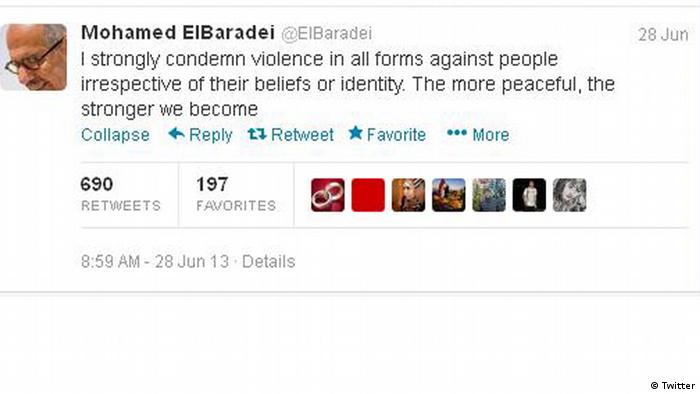 Powerful politicians, in this case the aspiring future leader of Egypt, are in this way able to preen their public image and communicate directly with their base.

ElBaradei's message of peace was retweeted by Wael Ghonim, who continues to be active on the protest front.

The embattled regime also used social media - Mohammed Morsi live-micro-blogged over the course of his downfall. And Twitter, in an apparent move to help people around the world to better connect with each other, has rolled out a beta translation tool that shows what the tweet means in numerous target languages.

Hovering over a foreign-language tweet in Twitter, the text "View translation" appears in the upper-right corner. Clicking on this provides a translation of the tweet text by Bing (a Microsoft search tool) which appears inline directly below the original text within the Twitter message box.

Morsi's final tweet, from July 2, was thus instantaneously accessible not only to those speaking Arabic, but to the world at large: 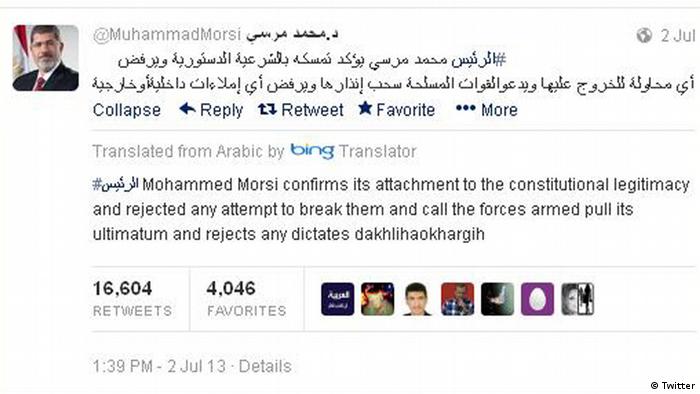 The Twitter feature, however, is still in beta and only available for some prominent Egyptian politicians and activists. The tweets of Adli Mansour, for example - the president of the constitutional court who has been appointed as Egypt's interim president - are not yet available for translation.

The actual effects of such attempts to consolidate waning power are unclear; however, what is clear is that those within the establishment as well have jumped on the social media bandwagon. And this could have positive results.

Martens believes that over the last two years, "social media users of all kinds - be it individual Egyptians, political parties, governmental actors, NGOs - have learned to use the tools more efficiently for whatever their aims are."

But people, and not social media, remain the drivers of social change, Martens emphasized. And as such public debate is broadened, it "can potentially lead to positive political and social change in the real world."

DW users have been discussing the events unfolding in Egypt over the past several days. Here are a few excerpts (04.07.2013)

'Finally we have our country back'

Egypt's Mohammed Morsi has been ousted from power after days of pressure from the military, but more importantly from the people on the streets. The mood is one of jubilation, but also apprehension as to what comes next. (04.07.2013)

The celebrations across Egypt following the ousting of President Mohammed Morsi look very much like those in 2011, when Hosni Mubarak had to go. But whether this new revolution is here to stay, is unclear. (04.07.2013)