New details have emerged describing how NSA whistleblower Edward Snowden spent two weeks in hiding after the US government issued an arrest warrant. He said he was safe among Hong Kong's refugees. 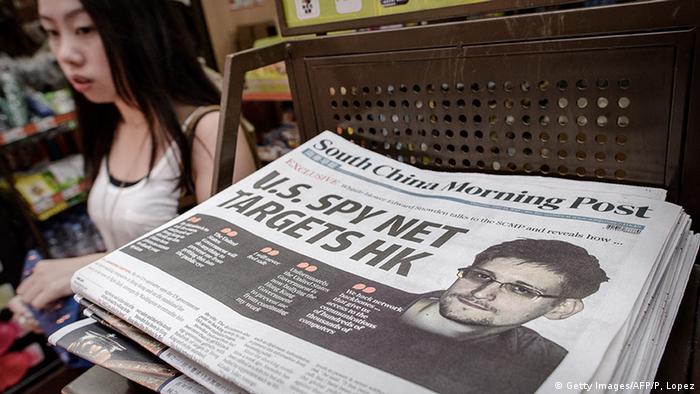 After quitting his job as a US intelligence contractor with the National Security Agency (NSA), Edward Snowden flew to Hong Kong, then in May 2013 he proceeded to initiate one of the largest data leaks in US history.

When Snowden realized his government wanted to arrest him, he checked out of a luxury Hong Kong hotel where he had ensconced himself, and hid someplace he and his lawyers thought authorities would never look for him - among the country's bedraggled refugees.

Refuge among the refugees

The refugees - from Sri Lanka and the Philippines, among other places - were all clients of lawyer Robert Tibbo, who also helped hide Snowden.

"It was clear that if Mr. Snowden was placed with a refugee family, this was the last place the government and the majority of Hong Kong society would expect him to be," Tibbo told "The New York Times" newspaper.

There was also the sense that the refugees would empathize with Snowden as their respective plights were similar. That empathy came in handy on his second day in hiding when he asked his Filipino hostess to get him a local English language newspaper.

Only when she saw Snowden's image splashed across the top of the newspaper did she realize whom she was hosting.

She described her shock thusly, "Oh my God, the most wanted man in the world is in my house."

With the help of his lawyers, Snowden hid indoors, except to change locations, for nearly two weeks until flying to Moscow. He hadn't intended the Russian capital to be his final stop, but while there the US government canceled his passport.

While many consider Snowden a heroic whistleblower, the US government has filed espionage charges against him. One of his most stunning revelations detailed a global surveillance apparatus that dove into emails and phone records, including German Chancellor Angela Merkel's phone.

Whistleblower Snowden against the system

Snowden, 33, and his supporters are revealing new details of his Hollywood-like travails because, well, Hollywood is about to release a new movie entitled, "Snowden." The Oliver Stone film is scheduled to be released Friday at the Toronto Film Festival.

Snowden reportedly left $200 for his hosts under a pillow when he left each of his hiding places.

"They had a hundred chances to betray me while I was amongst them, and no one could have blamed them, given their precarious situations. But they never did," Snowden told the "National Post" newspaper of Canada.

"If not for their compassion, my story could have ended differently," he added. "They taught me, no matter who you are, no matter what you have, sometimes a little courage can change the course of history."

Why isn't the NSA a hot topic in the US elections?

The US won't just get a new president this year. It will also be getting a new leader who must deal with NSA oversight amid an increased terror threat. Yet, voters appear indifferent. Kathleen Schuster explores why. (22.04.2016)

Coronavirus: UK to end nationwide lockdown, go back to tiered system 1h ago