An old port city on Spain's Atlantic coast has emerged as a prototype for high-tech smart cities worldwide. Blanketed with sensors, it's changing the way of life for its residents. 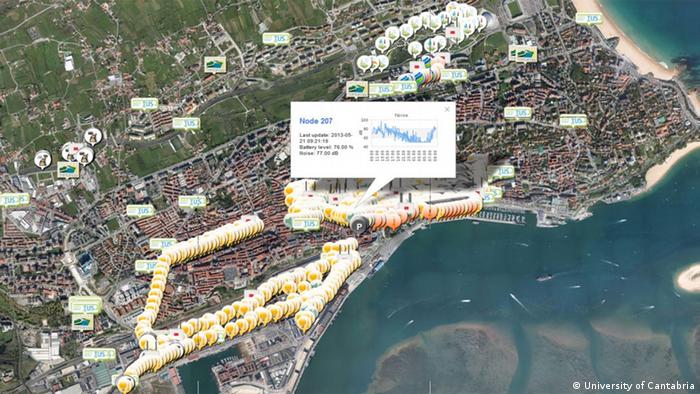 Santander is a picturesque coastal city - the sound of waves, crashing on the seawall, provides a gentle backdrop to daily life. Aside from the occasional ferry from England, the town in the northeast of Spain doesn't get too many foreign visitors.

It turned quite a few heads, then, when delegations from Google, Microsoft and the Japanese government all landed here recently, to literally walk the city streets.

What they've been coming to see though is mostly invisible: 12,000 sensors buried under the asphalt, affixed to street lamps and atop city buses. They silently survey parking availability, and whether surf's up at local beaches. They can even tell garbage collectors which dumpsters are full, and automatically dim street lights when no one's around. 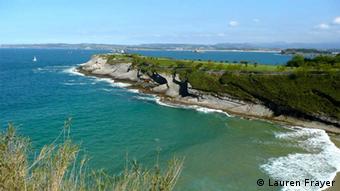 Santander's old port city is being revolutionized with sensors

The sensors were paid for by a 9-million-euro ($11.8 million) EU grant, and are supervised by Luis Munoz at the University of Cantabria.

"You see the two antennas? You see, just behind the trees?" he said, pointing at a box which looks a little like a wireless router. "Those antennas are gathering the information coming from the sensors under the ground, and they send it to the command and control center. It's well-integrated, it's seamless."

One of four European testing grounds

Santander is one of four cities in the UK, Germany and Serbia where sensors are being tested. But with about 180,000 residents, Santander is small enough to achieve full saturation with these devices. So it's become Europe's prime testing ground for expanding this technology elsewhere on the continent.

Munoz pointed out sensors and digital panels around downtown Santander that display the number of available parking spots on every street.

"Once a car parks on top of the magnetic sensors, the magnetic field changes. This is detected by the sensor, and then we update the information in the database, and this is depicted on the panels," he explained from his car seat.

The sensors send data to a command and control center - and also to a suite of applications on citizens' smartphones. This includes real-time information on road closures, parking availability, bus delays and even the pollen count. Citizens can contribute too, by taking a smartphone photo of a pothole or broken streetlight, for example, and uploading it directly to city hall. There's an app for that as well, Munoz explained.

Mayor Inigo de la Serna rattles off the list of big corporations with which his once-sleepy city is now doing business. 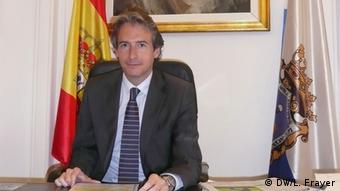 "We have signed agreements with NEC from Japan. With Ferrovial, a service company. With Telefonica, of course. With IBM for the Santander City Brain. [And] with the Bank of Santander for a new kind of payment device," he said.

Perhaps as you might expect for a smart city, the mayor pulls out his iPad and demonstrates the Santander City Brain - an app where he floats ideas and citizens can weigh in.

"People have already sent us about 400 different ideas. Very, very interesting. So [it's as though] the citizen is sitting with us, telling us 'I want to work to make this city better. I don't want to just complain.' You know?"

Complaining is something that many public officials in Spain hear a lot of these days. Spanish streets often erupt in angry protests over the economy. But Santander has managed to buck the trend. People are using their smartphones to make their city better. The city saves money - about 25 percent on electricity bills, and 20 percent on garbage - and utility companies pick up the tab for the sensors' upkeep, precisely because they too save money by using them.

Retailers seem to like it too. In his busy shoe shop, sitting among pairs of shoes, whilst he advises his customer, Angel Benito smiles.

"This has been a family business since 1938, it will be 75 years old this year. My grandfather opened it, and now myself and my sister run it," he said. It might be historic, but it's keeping up with the times. Benito's shoe store has a SmartSantander sticker in the front window, and he's received orders through smartphones, even when his shop is closed.

"This is an old city. We are old shops, but we are on it! We are on the latest technologies! We have to do it. Because when you are in crisis, you have [to make sure you take every opportunity] and just go for it," said Benito.

Are you being watched?

But with all this data buzzing around, and in the light of recent revelations about industrial scale spying through technology, are the city and its residents worried about privacy and data protection?

On a breezy morning in the heart of a city, there's a café under an olive tree in the pretty Plaza de Pombo. If you sit at this café, and download the SmartSantander apps to your phone, you can hold that phone up in the middle of the square and watch the icons pop on to the screen. Even if you couldn't turn your head and look around you, by looking at the phone, you'd see that there's a construction zone to your right, a sporting goods store to your left where a sale has just started. The store notification will also tell you that the shops open in 35 minutes, giving you time to enjoy your coffee before maximizing the tasks for the day.

But, after downloading all those apps, can the city "see" that you were there? In the control center and command center, IT researcher Veronica Gutierrez said no, well not exactly. 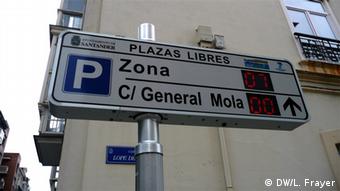 Sensors help with daily tasks, like finding a parking space

"We don't register the users. What we know is a user, from a [specified] language, is using this application [at that time]. This is the information that you can get. But it's the same as people do with websites," she said.

Gutierrez mans a huge digital map of the city, overlaid with coordinates for every smartphone user. Little dots appear all over the map, showing people who are using the app right now.

"In the past 24 hours [this is where they were]. But when we presented this application at the Mobile World Congress, we saw that people were using the application in the [United] States! Sometimes you get surprised!"

Wireless water and electricity meters are next

Over at the offices of Santander's biggest newspaper, El Diario Montanes, Emilio Martinez is the webmaster. He's 34, by all accounts a techie - but he's not on Facebook. He thinks it's "Big Brother." However, he doesn't have a problem sharing data with his neighbors. That's what cities are all about, he said.

"In Santander, everyone knows everyone. I think that behind Facebook, [there's] a commercial purpose behind that. Here, no! Here it's useful data, useful services for the citizens. It's different! I think if you offer something useful to the citizens, this is the best you can do," he said.

Bankrupt Spain may actually be fertile ground for smart cities like this. While Spaniards earn less than the European average income, they've got about a third more smartphones. The mayor of Santander is now the president of the Smart Cities Network in Spain. His next project? Wireless water and electricity meters for homes and businesses.

By 2030, four out of five people will live in megacities. Supplying them with power and water will be crucial. IT networking, intelligent power grids and sustainable energy should help create a "smart city." (06.06.2013)

Not mine, not yours, it's ours

From cars and computers to books and apartments, many people are returning to the lessons they learned in primary school: it's good to share. Businesses are also learning it can be profitable not to own everything. (03.12.2012)

London is home to iconic buildings like the cucumber shaped "Gherkin" and "the Shard" skyscraper, resembling a piece of broken glass. Now, Munich-based Siemens added the most modern of buildings to London's skyline. (21.09.2012)