Small German town fights back against neo-Nazis | Germany | News and in-depth reporting from Berlin and beyond | DW | 22.08.2012

Bad Nenndorf, site of annual neo-Nazi marches since 2006, stands to become a central gathering place for extremists. But townspeople are doing their best to fight back, organizing colorful counter-protests every August. 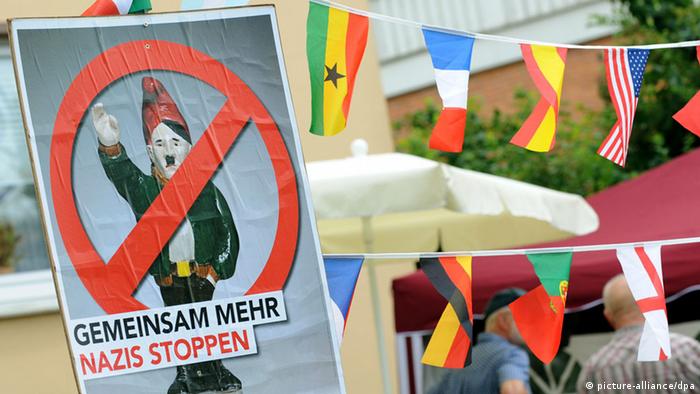 Neo-Nazis can be thrown off kilter by the simplest of things, like laughing people and joyous music. That is exactly how people in the small town of Bad Nenndorf in Lower Saxony took a stand against neo-Nazis as they held an annual march earlier this month.

The neo-Nazis' so-called funeral march in Bad Nenndorf has become a fixture for the country's right-wing extremists, who come from all over the country to attend. 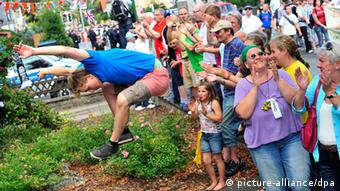 The counter-demonstration had a celebratory mood

But the neo-Nazis had to conduct their march along a mile-long path that counter-demonstrators turned into a colorful party zone. Every year, the route represents a gauntlet for the extremists. Residents position themselves along the neo-Nazis' path to disturb the march and provoke the extremists.

Residents of Bad Nenndorf have good reason to put up a fight, as the right-wing extremists under neo-Nazi activist Matthias Schulz have registered to hold their rallies until 2030.

The first time the march was held, in 2006, just a few dozen neo-Nazis came to Bad Nenndorf. In the years that followed, the number that came increased rapidly. Record attendance by extremists since then reached some 1,000 people, while the number showing up for this year's march was down to about 450.

Even if the number of neo-Nazis who come to the march is decreasing, "the prospect of having to endure the spectacle until 2030 is a catastrophe for us," said Gitta Matthes, chair of the parents' association at Bad Nenndorf high school.

"They get inebriated on them," he said. 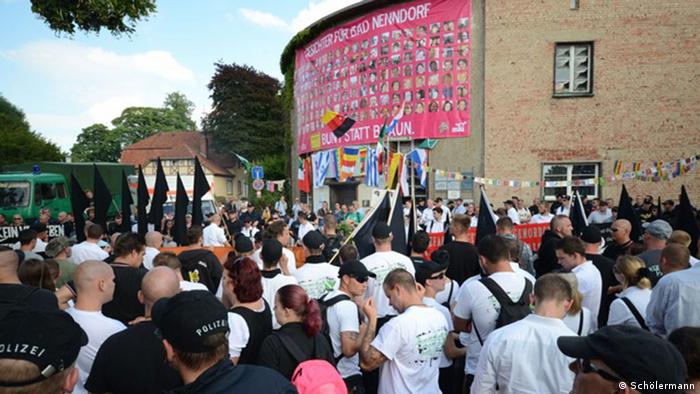 Hundreds of neo-Nazis gathered at Wincklerbad, site of World War Two-era abuses that critics say extremists have taken out of proportion

Right-wing extremists' falsification of historical events is transparent. Experts like Wolfgang Benz, former head of the Center for Research on Antisemitism in Berlin, talk of an effort "to qualify the crimes of the Third Reich." One example involves an internment camp called Wincklerbad that the British army established for captured Nazis at Bad Nenndorf after the end of World War Two. Occasional abuse of prisoners took place, but the infringements have been redressed on the legal and political level for decades.

However, speakers at the "funeral marches" draw a direct comparison between the abuse at Wincklerbad and the mass murder perpetrated during the Third Reich. One such speaker was neo-Nazi activist Ricarda Riefling, a Lower Saxony native who currently lives in the western German town of Pirmasens.

"One day, schools will no longer visit the concentration camp at Bergen-Belsen," she said, "but they will come here to Bad Nenndorf to mourn what was done to the German people."

In the first years of the "funeral march," Bad Nenndorf did not work hard to give an answer to such cynical speeches. Many in the town preferred to look away when the neo-Nazis came. Among them was Sigrid Bade, deputy chairman of Bad Nenndorf's sports club.

"I would not have believed that, out of these people with bald heads and bomber jackets, there could come a serious political threat," she said.

After she heard their speeches, though, it became clear to her that the demonstrators "are trained people who are really dangerous." 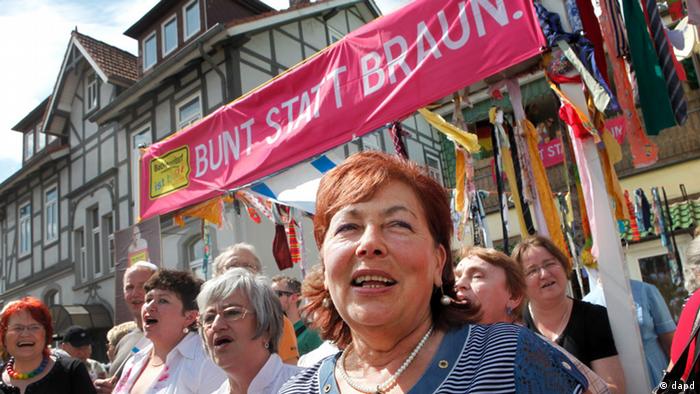 Today Bade is among the most active counter-protesters against the right. Many members of her sports club are right beside her. There is also now a large alliance called "Bad Nenndorf is Colorful." A colorfully adorned street in front of the town's main train station greets neo-Nazis whenever they come for the "funeral march." That's the handiwork of the hometown alliance.

"We will not let these Nazis dictate how, when and where we can party," said local pharmacist Jürgen Übel. Foremost of the counter-demonstrations in past years, however, have been the protest parties along the route of the neo-Nazi march.

The protest parties managed to make so much noise that the drums of right-wing marchers got completely swallowed up by the music. In that respect at least, the people of Nenndorf have managed to ridicule the neo-Nazis to the desired effect: immediately after the march, the extremists dejectedly left the place.

But they still plan to come back next year. Bad Nenndorf though, will be prepared: having protested those past years, the citizens will be ready to stand up to the extremists the next time as well.

"After the last march comes the next march," is their motto. To that end, the town will discuss democracy throughout the year - as well as the danger that right-wing extremism poses for it.

Germany to tackle neo-Nazis with database

German authorities want to fight right-wing extremism with a centralized database, a neo-Nazi register. The proposal is a response to the series of murders attributed to the Zwickau terror cell. (07.07.2012)