In the new TV series "Sløborn," a sudden pandemic holds a North Sea island community captive. But why are viewers indulging in this and other plague disaster stories in the midst of an actual pandemic? 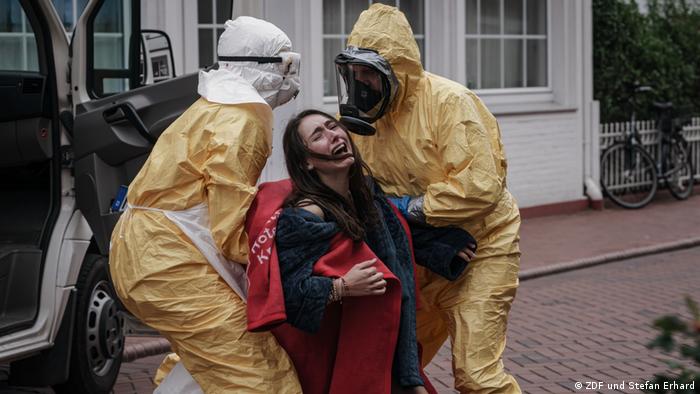 The catastrophe approaches slowly. A sailing boat drifts without a driver towards a North Sea island whose inhabitants are still busy with their everyday lives.

And then the first cold symptoms appear. Nobody suspects the cause, even if there are already reports in the news about a virus in Asia — the fictitious pigeon flu. The scenario now sounds very familiar.

The series Sløborn, commissioned by ZDFneo, tells in eight parts how a virus spreads around the world while focusing on one small community. Conceived by director Christian Alvart, who also helmed the Netflix series Dogs of Berlin, it was written and shot before the outbreak of the coronavirus. Now it appears to have benefited from the real pandemic, having since generated huge interest.

Rise of a disaster film subgenre

Pandemic disaster films are nothing new. In 1950, the classic film noir masterwork Panic in the Streets showed New Orleans gripped by a pneumonia contagion. In the 1990s, various movies looked at the AIDS crisis and how it affected entire demographics.

More recent incantations of the subgenre such as Outbreak: Anatomy of a Plague (2010) and Contagion (2011) have found renewed interest. There has been a strong uptick of that particular movie on streaming services, as the coronavirus pandemic has spread.

Starring Matt Damon, Kate Winslet and Gwyneth Paltrow and directed by Steven Soderbergh, Contagion climbed to the top ten on iTunes in the spring, trended on Amazon Prime and was the most-watched film from the Warner Bros studio's collection after the Harry Potter series. 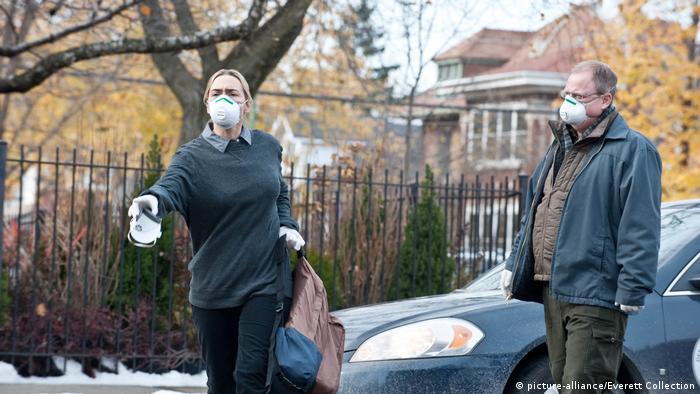 Reality on the screen

Among the viewers newly attracted by the pandemic was US director Barry Jenkins, who won the Oscar for best picture for Moonlight in 2017: "I paid $12.99 to watch a ten-year-old movie. I've never done that before," he said in The New York Times.

"It scared me," he added with regard to watching the eerie similarities to the unfolding COVID-19 pandemic.

"I was amazed at how visionary this film was," Eckhard Pabst, film scholar at the Christian-Albrechts University in Kiel, told DW about Contagion. Parallels between film and reality can help people cope in the midst of a pandemic, he added: "The audience sees: The course is not chaotic, the actions follow a plan. Despite all the horror, something calming can come from such material."

In numerous disaster films, the aspect of human misconduct contributes to the spread of the disease. Eckhard Pabst believes that this is not an educational measure when watching: "Films can reinforce a discourse, for example about wearing masks. But this will not change the behavior of the viewers in the long term."

But Scott Z. Burns, author of the Contagion screenplay, said he wrote the film out of real concerns about a potential outbreak in the US at that time already: "I remember being most concerned that the spread of misinformation could be as prolific and dangerous as the virus," he told The New York Times.

The jury is out on the audience and critical response to Sløborn, with only half of the eight part series having been broadcast so far.

The pandemic thriller is, however, chiefly meant to be a form of entertainment, and is thus somewhat divorced from the current reality of COVID-19. In Christian Alvart's series, the military has to quickly and sometimes violently intervene in Sløborn to control the outbreak.

Fortunately we are not there yet with the coronavirus.

Celebrities such as Ellen Pompeo, Lady Gaga and Ben Affleck are using their online reach to draw attention to the risk of the coronavirus spreading rapidly. The message is clear: We all have a responsibility.