Sintis and Romas Gain Minority Status | Germany| News and in-depth reporting from Berlin and beyond | DW | 26.07.2005

Sintis and Romas in Europe have long been two ethnic groups persecuted by governments and those in the "majority" alike. Now, one German state is recognizing them as a national "minority." 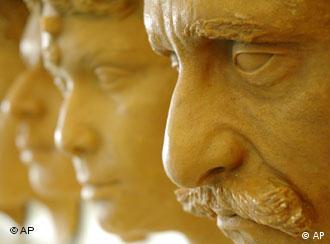 Not just masks: Sinti and Roma seek recognition in Germany

Rhineland-Palatinate is the first state in Germany to recognize as a national minority the roughly 8,000 Romas and Sintis who live there. In 1997, the federal government recognized the 50,000 Danish in the north and the 60,000 Sorbs who reside in the southeast as national minorities.

Rhineland-Palatinate's premier, Kurt Beck, and the head of the state's Sintis and Roma association, Jacques Delfeld, signed the agreement on Monday.

"We want to send a signal with this agreement against the discrimination and for the rights of Sinti and Roma in our society," Beck said after the signing.

Recognition of European minorities on a continent-wide basis dates back only to the EU's Framework Agreement, passed in the 1990s. Germany ratified it in 1997. 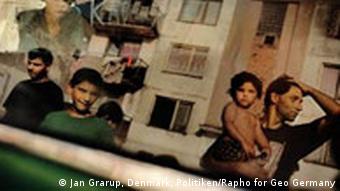 With it come certain responsibilities towards minorities. In Rhineland-Palatinate, the state will promote special support for Sintis and Romas in kindergartens, schools and colleges. This measure is supposed to level the playing field for the two groups in the educational system.

The Central Committee of German Sintis and Romas, in Heidelberg, has been demanding for over a decade that an end be brought to what it believes to be discriminatory reporting against the people it represents. This comes primarily in the form of arrest warrants and reports. 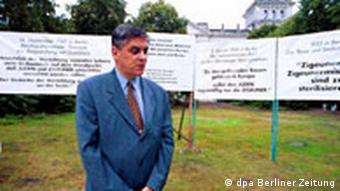 Romani Rose, head of the German Sinti and Roma organization, in front of a collection of signatures seeking recognition of the fact that they were also persecuted by the Nazis

Police sometimes include the terms "Sinti," "Roma" or even "Gypsy" in their reports, which are frequently published in the media. The Central Committee says the procedure helps to propagate negative stereotypes.

The new agreement in Rhineland-Palatinate will prohibit police from mentioning the ethnic identity of Sinti or Roma when publishing criminal reports in the state.

The Sinti and Roma languages will also be promoted.

No national recognition -- yet

Whether Berlin will take up the matter and put the recognition of the two groups on the legislative agenda remains to be seen. So far, the government describes the Sinti and Roma as an "ethnic group," which allow them some special protection.

But the federal government has not yet taken the final step, saying that the Sintis and Romas do not meet one of the five criteria set up in the EU framework -- namely that they do not have a permanent region they reside in.

Over 500,000 Sintis and Romas were killed by the Nazis in the 1930s and 1940s. Countries around Europe still systematically persecute and discriminate against the ethnic group that many do not understand.

On a modest stretch of land in Germany's East Saxony and South Brandenburg regions, a tiny Slavonic nation continues to fight its corner for cultural recognition and "Sorb" survival. (Jan. 8, 2005)

Berlin Mayor Klaus Wowereit recently opened the German capital's first ever festival for Sinti and Roma culture. The event is designed to raise European awareness of the continent's largest, but much-maligned minority. (Oct. 19, 2004)

Ambitious plans are afoot in central and eastern Europe to integrate Gypsies, or Sinti and Roma -- one of the continent's largest ethnic minorities -- into mainstream society within a decade. (Feb. 2, 2005)