Single in the City? -- Look Online

The number of single people in Germany is climbing, but finding that perfect partner seems harder than ever. Now more and more of them are trying new ways to find Mr. or Ms. Right--online dating services are taking off. 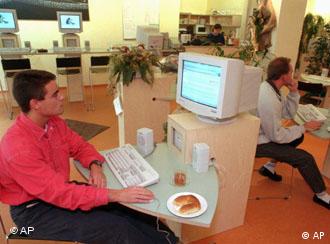 Ruth Elkins came to Berlin from her native Britain a year ago hoping to make her name as a journalist. Little did she expect that she would first achieve a modicum of fame when the country's media christened her the "loveliest woman in Berlin who just can't get a date."

The media firestorm that led to this minor celebrity got ignited when Elkins wrote an article for the UK newspaper The Independent in which she bemoaned her nearly dateless existence over the past year in this city of three million and chalked it up to the observation that German men simply don't know how to flirt.

"They can't engage in small talk," Elkins lamented. "In Britain we might break the ice with a bit of complaining about their weather and some good eye contact. Here in Berlin, the men won't look at you and if they talk at all, they're always going on about bloody Goethe."

"The general consensus among my German female friends is that it's harder to meet men when you're out on the town," said Elkins.

Maybe she and her friends have been looking in the wrong place.

Online dating has become the choice of many single people in Germany who don't particularly want to stay single, but also have little desire or time to hang out in bars.

"When I come home exhausted after work in the evenings, I don't feel like having to get ready and then go back out again into the city," said Carsten Bade, 32, who has discovered that Internet dating services are an attractive alternative to the primping and posing that the bar scene requires. "I can start the whole dating game in a very relaxed way by turning on the computer."

More and more Germans are doing just that, turning on the computer and pointing their browser to one of the flood of online dating sites that are springing up in Germany. A recent survey found that 62 percent of all unmarried Germans said they had set up a date either through e-mail or an Internet chat room. The same study also found that 45 percent of those using Internet dating services do so because they personally know a couple who met online.

For Germany's Internet service providers, cyberdating is proving to be an emerging growth sector and both the country's biggest online players and more traditional media outlets are hoping to make some money off of it. This summer T-Online, a unit of Deutsche Telekom and Germany's largest web portal, plans on introducing Match.com, the world leader in online dating, to its site. Yahoo, AOL and Freenet are already in the cyberdating business. Old Economy companies not often thought of in connection with the latest Internet fad also see potential profit in wooing on the web. Retailing giant Metro has gotten into the game, as has the publisher of Germany's esteemed newspaper, Die Zeit.

Yahoo Germany's head Frank Dillitzer told the newsmagazine Der Spiegel he hopes to see turnover "in the tens of millions" of euros from their online dating services. Its advocates say they've found a business model that can actually made money, unlike many other online enterprises. There are no warehousing expenses, no delivery costs or expensive development departments. And as opposed to other forms of online entertainment, more and more surfers seem willing to pay subscription fees to browse potential partners or pay one-time charges when they want to contact a particular person.

Online dating is ideal for today's singles, said Stefan Hradil, Professor at the University of Mainz who researches the topic. It fits into their schedules and carries less stress with it then the old fashioned method.

"People like their independence, and the Internet offers them a place to meet without feeling much obligation," he told Deutsche Welle. 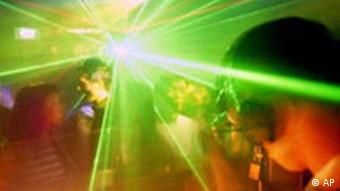 The old way to meet people.

Traditional meeting places, like bars and clubs, the gym or restaurants having fallen behind the Internet as places to meet, or at least go on the prowl for that special someone.

According to a study conducted by the Society for Consumer Research, only private parties and the office beat out online dating as preferred pickup places. For many online Germans, the fees paid for an address of the person whose profile they've just seen seem a better investment than money poured into drinks and new outfits for the club.

As with any dating, disappointments with the online version are unavoidable. Many a person has build up an image of the perfect partner in his or her mind through e-mails and private chats, only to be bitterly disillusioned when the real-time date takes place.

Berlin's "lonely journalist" Elkins, for one, says she's open to looking for Mr. Right in cyberspace, since her traditional methods don't seem to be working.

"The whole thing's rather funny until another Saturday night rolls around and I find myself in front of the telly with only an open pizza box as company," she said.

In her new short feature film, November Wanderin attempts to break down clichés about Jews by telling a tale of the dating adventures of two Jewish sisters in Berlin. (November 12, 2002)