In her new short feature film, November Wanderin attempts to break down clichés about Jews by telling a tale of the dating adventures of two Jewish sisters in Berlin. 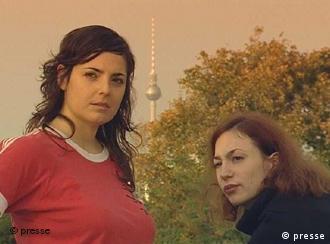 American filmmaker November Wanderin has called Berlin her home since 1984. In her first short feature film, "Berlin Beshert," she follows the dating experiences of two Jewish sisters in Berlin. The film premieres on Tuesday at Berlin's Kino Arsenal as part of a cultural festival sponsored by the Jewish community of Berlin.

Dahlia is straight and culturally Jewish. Leah is lesbian and religious. Both are searching for a soulmate ("Beshert" in Yiddish) in order to avoid their mother's threat of taking them to a matchmaker for arranged marriages.

DW-WORLD caught up with the filmmaker in Berlin.

Your film is about Jewish singles in Berlin. What are the main issues you address?

It's a satire. That's important. I'm trying to address clichés about Jewish life in Germany and trying to show what modern life is like here in Berlin. Often it is only seen as something religious or something related to synagogues or klezmer music. I tried to break down these clichés.

The film follows the dating adventures of Dahila and Leah. On their first blind date, both end up at a klezmer concert with two very different dates. On the one hand, there's a visiting American Jewish journalist who's trying to find out about Jewish life in Germany. He takes Dahlia there. He thinks, ' Wow, what a thriving Jewish community.' Even though none of the musicians are Jewish and nobody in the audience is Jewish. 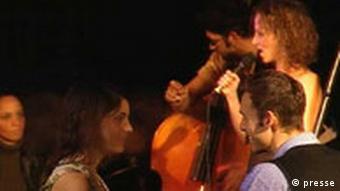 The other date is Barbara. She says she's Jewish, but she's Jewish because something like her grandmother's father's ex-husband was Jewish. She think all Jews listen to klezmer music.

How did the film come about?

The Jüdische Kulturtage (Jewish Cultural Days festival) invited six Jewish filmmakers from Berlin to make a short piece about Jewish life in Berlin today. That was the only requirement, we could choose which genre we wanted

My first impulse was to make something very modern. I was tired of only seeing Jewish topics presented in a historical context. I wanted something in color, not in black-and-white. Something about our lives here and now, not a story that's only centered on the Holocaust. I wanted to attempt to reflect something of my generation. To take a universal theme – love -- and show what different realities we have.

The film is based on personal experience and many experiences of friends, where supposedly everything was fine being with a non-Jew. But then at some point some really harsh things came out that were maybe not anti-Semitic, but were about not being able to relate or feeling alienated on some level.

Are the concerns the same for homosexuals and heterosexuals?

It's the same. That's the point. They both experience these kinds of impossible people. …But there's a happy ending.

Berlin Beschert is the precursor of a longer film you have in the works. What can we expect from the longer film?

I want to address relations going on right now between Jewish and non-Jewish Germans. There are so many extremes that people get caught between. There's the phenomenon of philo-Semitism, where everything Jewish is trendy and good. And on the other hand, there is a very strong anti-Israel sentiment. Somewhere inbetween there are people attempting to have normal relations. I think it's a process.

Festival program and information. In German only.