Whale meat and blubber has long been a staple of the Faroese diet, but with pilot whales increasingly contaminated by toxic substances, this traditional food source is silently poisoning the local population.

Each year, for over 1,000 years, hundreds of pilot whales are rounded up and slaughtered by hand on the beaches of the Faroe Islands.

Many islanders still view the non-commercial hunts as a traditional custom. The meat is carved up amongst families and frozen, ready to defrost and consume later.

"Whaling is the Faroese way of life," said Ingi Sorensen, a Faroese diver and photographer, in an interview with DW. "It has been here for hundreds of years, and if it wasn’t for whaling in the olden days, there wouldn’t be any Faroe Islands, I think." 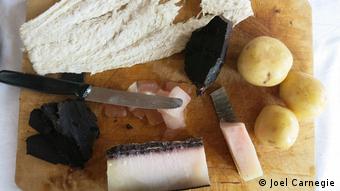 In recent years, The Grind, as this custom is known, has come under the international spotlight with its slaughtering methods being challenged by animal rights activists. There are regular clashes between Sea Shepherd activists and local whalers, resulting in the animal rights organization being banned from Faroese waters.

"Almost everything that you see in the supermarket [in the Faroe Islands] is imported," he told DW. "For me, killing an animal is killing an animal, and it’s not a good thing. It’s a necessary thing for getting food. If you feel that you can eat a chicken and then say that I can't kill a whale, you're a total hypocrite." 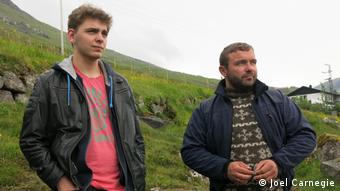 Faroese locals, Petur Sigur and Jens Mortan Rasmussen look out across one of the 23 'Grind' beaches on the Faroe Islands.

But pilot whale meat is so heavily contaminated by mercury and other heavy chemicals in the ocean that medical authorities on the islands are actively discouraging consumption of the whale meat.

Dr. Pal Weihe is the Chief Physician at the Department of Occupational Medicine and Public Health in the Faroese Hospital System, and since 1984 he has been researching and testing the effects of eating pilot whale meat with over 2,300 Faroese children and their mothers.

He told DW that pollutants like mercury, PCBs (polychlorinated biphenyls) and PFCs (perfluorinated compounds) from the world’s oceans end up in sea mammals, eaten in communities like the Faroe Islands, Greenland, parts of Canada and Siberia.

"That means that [the] silent pollution of the oceans will one day end up on the dinner table in some communities, and our children are paying the price," Weihe said. 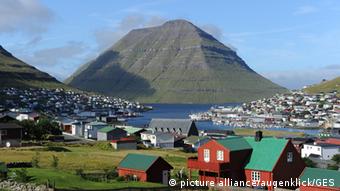 Further investigations led Weihe and his colleagues to discover that contaminants in pilot whale meat and blubber appeared to increase the risk of developing Parkinson’s disease, hypertension, arteriosclerosis, and even cognitive deficiencies in children with prenatal exposure to methylmercury.

"The medical profession in the Faroes is recommending not to eat [pilot whale meat] at all," he said.

But instead of endorsing a recommendation to ban the consumption of pilot whale meat and blubber, in 2011 the Faroese Government chose to endorse a more generous recommendation from the Faroese Food and Veterinary Authority, which stated that adults should eat at most one meal of pilot whale meat and blubber per month. The report also advised that pregnant and breastfeeding women, as well as younger girls should refrain from eating the whale meat.

Kate Sanderson heads the Mission of the Faroe Islands to the EU and has been a government advisor on whaling for over 25 years. She told DW that eating pilot whale is an individual choice and not something that the Faroese government would want to ban.

"People are very well aware that there are risks involved in eating whale meat and blubber and recommendations of this nature are only ever that. They aren't law," she said. "So it’s certainly not something that the government has concluded... it’s an individual decision whether to continue to eat this source of food." 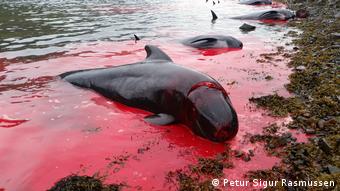 Dead whales lined up on Hvannasund beach, after a 'Grind' whale hunt.

But Weihe says that while the government-endorsed recommendation from the Faroese Food and Veterinary Authority could have been justified 10-15 years ago, the body of evidence on the harmful effects of eating pilot whale is now overwhelming.

"There are a lot of people having an opinion, but they are not scientifically based at all," he said. "My first obligation is to give health advice to the people, not to preserving the culture."

Faroese environmentalist Runi Nielsen told DW that politicians will defend whaling from adverse changes, even though they are recommended by the medical authorities.

"It is becoming really black and white, if you are a politician and you say we should not kill so many pilot whales because it’s really unhealthy for the consumers, then this politician might be accused of being a Sea Shepherd supporter," he said. "So, I don’t think a ban is going to happen. It has to come from the people."

Kate Sanderson believes that people should focus on cleaning up the oceans, rather than being concerned about whether the Faroese should eat pilot whale.

"It’s good food," she said. "It’s not our fault that one has to be careful about what one eats. These pollutants are not coming from here; they are coming from industrial processes elsewhere around the world. That’s where the real focus should be. Let’s let the Faroe Islanders keep doing what they’re doing - and clean up the seas."

Every year a bloody spectacle takes place on the Faroe Islands: Fishermen hunt pilot wales and dolphins. Much to the dismay of activists who have been protesting against this old tradition of wale hunting. (06.08.2015)

Two German cruise companies have agreed no longer to feature the Faroe Islands. The move comes in response to pressure from animal rights groups to boycott the country over the mass slaughter of whales. (13.07.2016)

The small island archipelago in the North Atlantic is a haven for lovers of untouched nature and solitude. The 18 islands with their capital of Torshavn belong to Denmark but are a world onto their own. (25.07.2016)