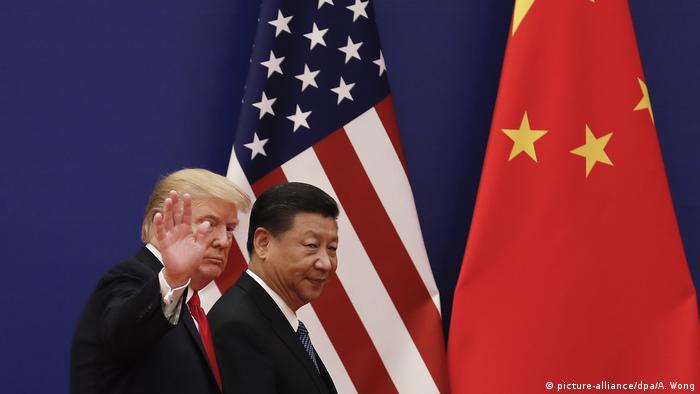 bot Much ado about nothing? Just before the next round of tariffs were supposed to come into effect on December 15, they were canceled. US President Donald Trump celebrated that a last-minute trade deal had been struck after a year and a half of dispute and negotiations. However, he has already backtracked four times after similar announcements so this Phase One agreement is more of a volatile truce than a real breakthrough, regardless of how Trump may present it.

On Twitter, the US president announced that Beijing had not only agreed to buy considerable amounts of US goods but also to implement structural economic reforms. For its part, Beijing was more reserved concerning to the "partial" agreement.

While Washington would like the 86-page document to be signed in the first week of January, Beijing wants it to be translated in precise detail and reviewed by legal experts first. Chinese officials have said that they must be treated with mutual respect and "expanding trade cooperation must be based on market principles and WTO rules."

This is where the problems start. Trump said China had agreed to buy $50 billion (€45 billion) worth of agricultural goods per year — twice as much as before the trade dispute began. But China will not buy more than it needs. In China, US soy is generally used to feed livestock. But the outbreak of African swine fever in China has had a terrible impact on the number of pigs in the country. With or without Phase One, China is going to have to import more meat.

Another uncertainty comes from the fact that China will gradually put the concessions that it has agreed to into practice and nobody can say exactly what this means. Beijing is used to playing for time.

Regarding the "structural reforms," a lot also remains to be determined. Washington said Beijing had agreed to drop technology transfer as a condition for access to the Chinese market. However, this has been the case since 2014. Moreover, it is not an altruistic measure. China itself has now developed enough high-tech that it wants to protect. This past year, Huawei was the global patent king.

For Trump, once again, it is a question of symbolism. He wants to send a signal to the US farmers who have suffered from the trade dispute that there has been some success. Beijing wants the tariffs that have already been imposed to be abolished. Trump wants most of the 25 percent tariffs on $250 billion worth of goods to be maintained as a means of pressure for the next round of negotiations. This means that Phase Two will not be easier.

In Europe, there is a sense that Beijing could give in to international pressure as a result of the current negative coverage of China, particularly the protests in Hong Kong and the human rights violations in Xinjiang. But, in actual fact, the pressure is on President Trump.

According to the International Monetary Fund, the trade dispute has already cost the global economy some $700 billion. The markets are tired of the ups and downs. While the Democrats generally agree with Trump when it comes to China, some have interpreted Phase One as "a total capitulation."

What is clear is that the Chinese government will not be easily cornered as long as it has the population's support — and this will be the case as long as the economy is growing. Though it may not be expanding at the same rate as before, growth is still satisfactory. China's success is not primarily due to its one-sided interpretation of international trade regulations but to its size and how the country is managed politically. The domestic market is becoming increasingly important and dependence on other countries is decreasing.

Saturated local markets have forced Western companies to look to China. And Chinese technology is playing an increasingly important role in the world. Washington will have to accept that a new "Cold War" will not work. Trump has tried to put over 60 countries under pressure to not work with Huawei, but, so far, only three have agreed. China is not the Soviet Union — an artificial grouping of states based upon military strength. China, which has not taken part in a war since 1979, is not the revolutionary nation of yore but a country that ranks stability as of primary importance.

By now, Washington should have understood that China will not change course because the US demands it. Trump is destroying four decades of trade relations and also the US' head-start. Ever since President Richard Nixon's visit to China in 1972, it had been the US strategy to support China's opening and to integrate it into the international network and to balance its power with that of others.

The Trans-Pacific Partnership (TPP) was supposed to act as an economic counterbalance — it was President Barack Obama's biggest trade deal with other countries in Asia. And one of Trump's first acts was to cancel it so as to underline his position as a more powerful opponent than his predecessor. Soon afterward, he shocked South Korea with his announcement that it should foot more of the bill if it wanted US protection. He omitted to point out that the US troops in South Korea contribute greatly to US hegemony. He has been just as reckless in his dealings with other traditional US allies, including Canada, Australia and EU member states. Right now Japan, another big Asian player, is sliding into recession as a result of Trump's narrow-minded America First policy.

Exclusion is the wrong strategy

On some points, Trump is right, for example when he accuses Beijing of imbalance in trade relations. But, whether we like it or not, to exclude China instead of integrating it is the wrong strategy not to mention nearly impossible. Beijing has to maintain a place at the table, otherwise, it will create its own rules and structures. This is why China set up the Asian Infrastructure Investment Bank after not being given equal rights in the World Bank and the IMF.

Furthermore, in our globalized world, issues such as climate change and free trade have to be resolved with China. There can be no progress without compromises in a multi-polar world. This will be more difficult for the US than for China. The US loses power with every compromise, while China's influence is growing. Even if not as fast as some in Beijing would like.

The US president has described the first part of a bilateral trade agreement as an "amazing deal." But Chinese officials were cautious, saying they hope "both sides will abide by the agreement." (13.12.2019)