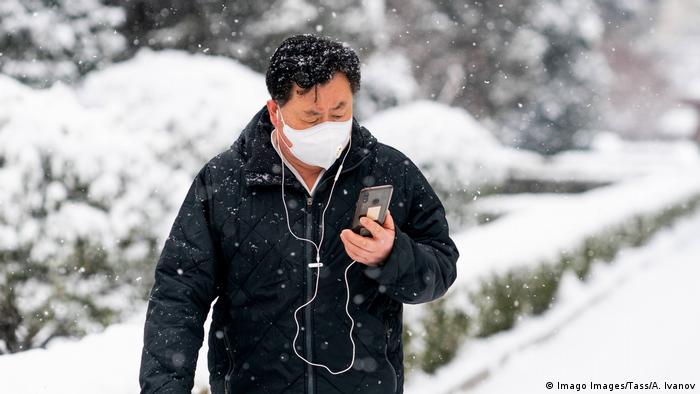 The World Health Organization has warned of a dangerous "infodemic." Indeed, the rapid spread of panic, false information and racist prejudice triggered by the virus is alarming. All over the world, people who look as if they could be Chinese or of Chinese descent have reported incidents. In Rome, a bar near the Trevi fountain put up a notice banning Chinese customers. In Berlin, a young Chinese woman was attacked and had to go to hospital. These are just two examples found under #iamnotavirus hashtag.

Conflicting feelings of unity and division in China

In China, the crisis has, on the one hand, triggered a sense of unity against the rest of the world. On the other hand, the country is divided into two camps: Those who pose a threat and those under threat, with a rather blurred dividing line.

People from Wuhan and more generally the province of Hubei, where the majority of cases are still concentrated, are being treated like outcasts with many - on and offline - blaming them for the virus itself. In one incident before a flight from Japan to Shanghai, passengers from the east Chinese province of Zhejiang almost came to blows with others from Wuhan whom they did not want to allow onto the plane. In various villages in China, vigilantes have set up roadblocks to protect themselves.

The social consequences could be as harmful as the virus itself. The government is torn on how to react. On the one hand, transparency can help to keep the epidemic under control. On the other, it does not want to exacerbate an already tense atmosphere by allowing rumors to spread.

Beijing cannot influence the reactions abroad, where coverage of the crisis seems excessive compared to previous epidemics. On social media, Chinese commentators have queried the use of the word "pandemic" by many Western media outlets, even though the World Health Organization has not declared one.

Its defintion says it's "an epidemic occurring worldwide, or over a very wide area, crossing international boundaries and usually affecting a large number of people." So far, the WHO has declared coronavirus, which has affected individuals in about 20 countries, a "public health emergency of international concern."

Frank Sieren has lived in Beijing for more than 25 years

Bloggers are angered by the fact that some media outlets have played down the praise meted out by the WHO to China. Director-general Tedros Adhanom Ghebreyesus stated that China was "actually setting a new standard for outbreak response.” He also said that the international community should help countries with weaker health systems prepare for outbreaks, that countries should work to combat the spread of false information and rumors, and share data and knowledge about the virus, among other recommendations.

Although the WHO has explicitly warned against introducing "measures that unnecessarily interfere with international trade or travel," many countries have ignored this advice. The US has imposed entry restrictions on foreign nationals and quarantines on US citizens returning from China. The US State Department has given Level 4 travel advisory to China, which puts it on par with Afghanistan, Iran, Libya — places with a "greater likelihood of life-threatening risks."

A Chinese government spokesman said that this was "not a gesture of goodwill." Nor was a comment by US Commerce Secretary Wilbur Ross that the upside of this "malignant diseases" was that it could "help bring jobs to America."

This triggered an outpour of wrath on Chinese social media platforms as did a statement issued by the Commerce Department that it was important "to consider the ramifications of doing business with a country that has a long history of covering up real risks to its own people and the rest of the world."

Commentators accuse the US government of acting far more carelessly and with less transparency when H1N1 broke out in 2009. Swine flu is estimated to have killed at east 280,000 in over 200 countries, 10,000 in the US alone. The Chinese state and people are united in thinking that US citizens were not treated with so much prejudice. Headlines using the "Made in China" motto to describe the virus do not help.

However, there is also some suspicion within China of the government's new transparency, considering its previous track record. Even information relating to this outbreak was hushed up at the beginning and many wonder if this is still the case. The Wuhan authorities knew of one incident of coronavirus on December 8 but an official warning was issued only three weeks later. Then, officials ruled out that the disease could spread through human-to-human contact - falsely. The arrest of many doctors who had issued warnings did not contribute to further trust.

But the government has now admitted "shortcomings and deficiencies" in its handling of the outbreak and President Xi Jinping has said this is a "major test" of China's system. He has ordered officials to work together to improve the emergency response system and public health regime.

In response to his threat that anyone who tries to cover up the spread of the disease will "be nailed on the pillar of shame for eternity," there is now an app so that people can denounce local officials.

After a brief period when censorship appeared to have been lifted, it is back. People who spread rumors are threatened with sanctions. The party decides what a rumor is.

However, when this crisis is over, Beijing would do well to introduce flatter hierarchies and allow more open debate. Censorship always gives the impression that something is being silenced whether the intentions are good or not. If officials were rewarded for making timely warnings instead of being punished with dismissal or worse, they might be more likely to embrace responsibility instead of throwing it about like a hot potato.

China has a chance to emerge from this crisis stronger if it learns from the consequences. The West would also do well to examine the media coverage and ask itself whether the Chinese have been treated fairly.

Frank Sieren has lived in Beijing for over 25 years.

Around 20 German citizens are believed to be still stranded at the center of the coronavirus outbreak. Germany is in talks with the UK to evacuate the remaining people in a flight shuttling a group of British citizens. (06.02.2020)