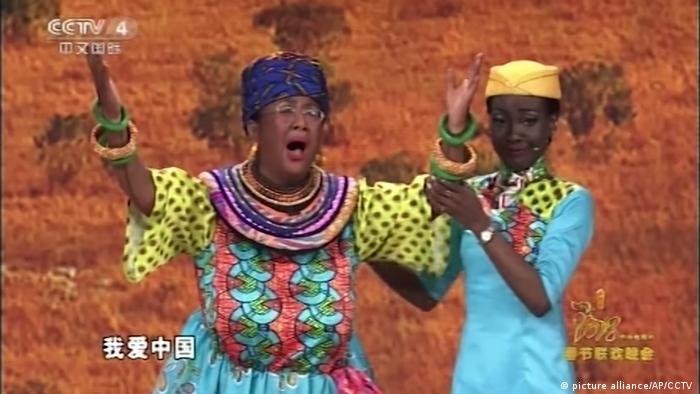 Just like similar holidays in the West, China's New Year celebrations usually entail spending time with the family and eating lots of food. There is also plenty of boredom and watching television together to help pass the time. The New Year gala put on by state broadcaster CCTV is the highlight — the most popular TV program in the world, drawing some 700 million viewers each year. It has been broadcast since 1983 and is supposed to be a reflection of Chinese society. There is always plenty of dance, acrobatics, comedy and circus acts — something for each of China's 1.4 billion inhabitants. Pop stars and singers from the Beijing opera perform and of course politicians make self-congratulatory speeches. Once again, President Xi Jinping's New Silk Road was mentioned this year, as well as China's economic investments in Africa. It was this latter topic, however, where the program went wrong.

A 10-minute-long skit praising China's exemplary cooperation with Kenya, highlighting the Chinese-built railway line from Nairobi to Mombassa, which entered into operation at the end of last year, was a carnival of cliches. It began with dancers dressed as "bushmen," gazelles, and zebras performing to Shakira's 2010 World Cup song, "Waka Waka (This Time for Africa)". One man was dressed as a monkey. The crowning feature was Chinese actress Lou Naiming playing "Mama Africa," who was in blackface and given a padded behind and a basket of fruit to put on her head. "China has done so much for Africa," she said. "I love China. I love Chinese people."

It didn't take long for the backlash to begin on social media. The skit was slammed for its extreme racism and described as abhorrent. One Chinese user said he was embarrassed for his country and its people. The show drew international media condemnation accusing China of revealing its neocolonialist tendencies and deeply-rooted racism.

The response has not gone down well with the state media apparatus. The former colonial powers that exploited Chinese people as day laborers, subjecting them to hard work on plantations owned by the white ruling elite or on construction sites, such as the Panama Canal, are displaying double standards, was the response. There is something to be said about this.

However, the skit also shows how far behind China is in certain matters. So behind that nobody in charge thought that their portrayal of Africans might be considered offensive. This sketch is not an outlier. Chinese washing detergent commercials show black people being washed clean, i.e. white. A recent exhibition that compared the physical similarities between animals and humans and hung them next to each other caused a furore.

State censors have deleted social media comments by young Chinese people who criticized the sketch — a sign that the authorities are not ready to reflect. The government decides what is politically correct, and it is extremely sensitive when it comes to China's own honor. German carmaker Daimler recently had to apologize after quoting the Dalai Lama in an advertisement as saying: "Look at situations from all angles, and you will become more open." The official People's Daily newspaper responded by asking how Germans might feel if a company in another country used well-known quotes from Adolf Hitler in its advertisements.

There seems to be double standards in Beijing, too. Hannah Getachew, a 30-year-old woman from Ethiopia who is studying law in Beijing, said that while mistakes can happen, an apology from CCTV would be welcome even though the damage had been done. She is right. So far, there has been no apology. This is not what it means to be sovereign and open to the world.