Shopping in Amazon′s supermarket of the future | Business | Economy and finance news from a German perspective | DW | 05.04.2021

Shopping in Amazon's supermarket of the future

The online giant Amazon has opened its first brick-and-mortar cashierless supermarket in Europe: the Amazon Fresh store in London. DW's Marie Sina tried it out. For her, it was part store and part sci-fi. 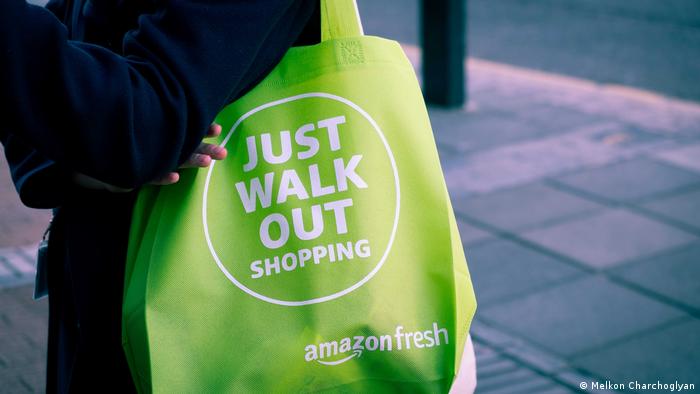 I could spot the new Amazon Fresh supermarket in Ealing, West London, from a block away. The white-and-green store logo is turning heads on the busy road, especially as lockdown measures are being lifted in the UK.

"You can pay with your phone," one woman said to her husband while pointing at the cashierless exit. "It's madness."

In early March, Amazon opened its first "just walk out" grocery store in Europe, where customers can simply put their items in a bag and leave without stopping to pay at a register.

At the entrance, staff in fluorescent-green Amazon Fresh T-shirts explained the process. I had to open the Amazon app on my smartphone and scan a personalized QR code. A green light appeared; the gate swung open letting me in.

The moment I entered the store, the app timed my visit. 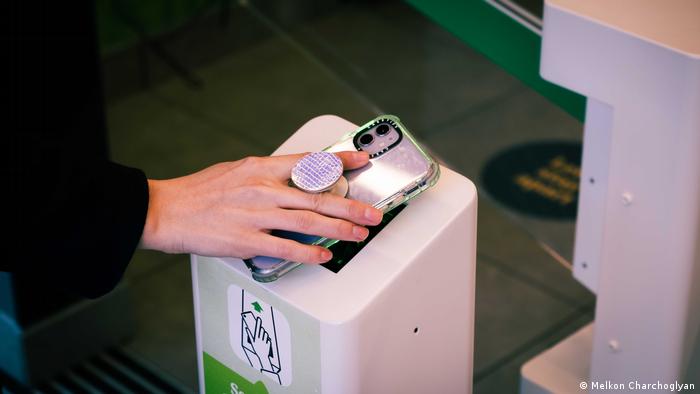 Technology to detect every motion

At a first glance, the store seemed like any small supermarket in London. But a look at the ceiling quickly revealed the difference: cameras and motion sensors were pointing in every direction, monitoring every inch of the store.

Every item I placed in my fluorescent green Amazon Fresh bag automatically got added to a virtual cart. I couldn't help but glance at the cameras while picking items off the shelf, half expecting them to move along with my every move, like in a 1990s sci-fi movie. But they remained in place.

The store uses a combination of computer vision, depth sensors and machine learning to register exactly which item shoppers take off the shelf. The technology was pioneered by Amazon Go stores in the United States, which first opened in 2018. 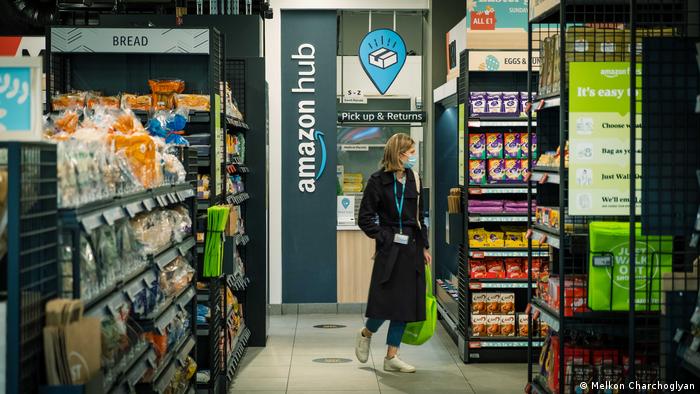 The company has pledged to only associate information collected in the store with a customer's Amazon account for up to 30 days.

But UK civil liberties groups are criticizing the large personal data footprints that Amazon gains through this technology. "We need to know more about what that really means in practice and what the potential for the reassociation of the data might be," Jim Killock, executive director of Open Rights Group, told me later.

While I strolled through the supermarket, Amazon's signature smile logo grinned at me from every shelf. Along with the opening of its Ealing flagship store, Amazon launched its own grocery brand. Hundreds of its own branded items line the shelves: mashed potatoes by Amazon, cured ham by Amazon, yellow roses by Amazon.

Natalie Berg, a retail analyst and founder of NBK Retail, later told me that a physical grocery store was the missing puzzle piece for Amazon's market-domination strategy. "Grocery is a really important category, because customers buy groceries on a regular basis. Entering the business is Amazon's way of getting you to shop with them for everything else," she said.

The supermarket operates entirely without carts and shopping baskets, letting shoppers move through the aisles swiftly. When I arrived at the liquor corner, I was perplexed to see two staff members — actual people — standing there, looking a lot like a pair of bouncers. After I picked out a bottle of wine, one of them checked my ID. The fact that age confirmation is still carried out manually felt surprisingly comforting.

Walking toward the exit, I half expected an alarm to sound off as I left the store with the bagged groceries under my arm. Instead, the gate swung open letting me walk back out onto the busy shopping street. The cashierless model is not new to British shoppers. Other UK retailers, such as Tesco and Marks & Spencer, have also adopted their own versions. But Amazon's technology is the only one that does not require customers to scan their shopping items in an app. "Amazon's concept is game-changing because it's seamless," said Berg.

Deanna Sparks, who was also shopping at the store, shared my sentiment about the cashierless exit: "It felt quite strange. I felt quite guilty, like I was stealing something."

The 54-year-old Londoner made the trip to the store after hearing about it on the news. "I wanted to try it and then tell my friends that I went and what it was like," she said.

None of the other customers I spoke with seemed spooked by the cameras in the store. "I know there are cameras in London everywhere you go, so it's not something I pay attention to anymore," shopper Elizabeth Beelur told me. 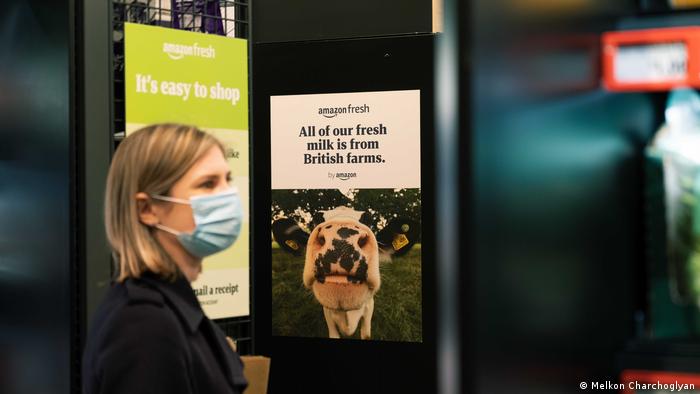 On the way out of London's Amazon Fresh shop

The start of something big?

The retail expert Richard Hyman thinks that, in order to take on British retailers, the tech giant will need to continue to improve the variety of products on offer in its stores. "The real strength of Amazon is in the transaction, it's essentially a transactional business in a way that most traditional retailers aren't. What it's less good at is retailing," he told me.

As the business model develops, Hyman expects that it will only be a matter of time before Amazon Fresh stores open their doors in other European countries.

Back home from my Amazon Fresh shopping trip, I prepared a salad with the ingredients I just bought. As I took my first bite, I realized that I had no idea how much I just spent on groceries.

A quick look on the Amazon app revealed everything. After I spent 14 minutes and 55 seconds in the store, the final bill came in at £15.56 (€18.25; $21.42). The experience felt more like online shopping than a trip to the supermarket, and I was ready to eat.

Will supermarkets in Germany ever embrace self-checkouts?