A shooter opened fire at YouTube's US headquarters in San Bruno, near San Francisco, on Tuesday.

The woman used a handgun to wound at least three people before fatally shooting herself, according to police and witnesses.

"I looked down and saw blood drips on the floor and stairs. Peeked around for threats and then we headed downstairs and out the front," a verified Twitter user who claims to be a YouTube product manager posted.

Local broadcasters showed people evacuating the building with their hands above their heads. 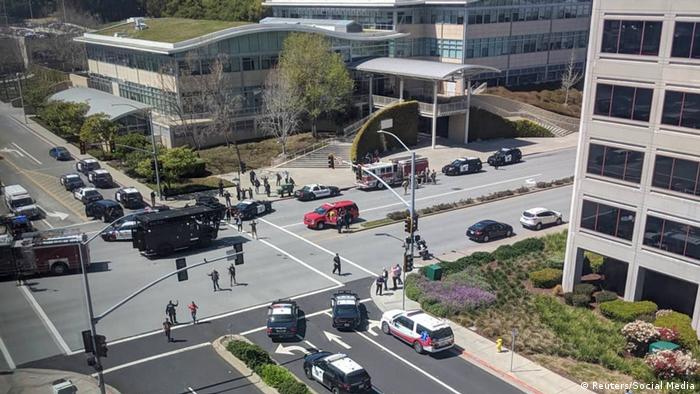 At least four victims and one fatality reported

The White House said US President Donald Trump had been briefed on the situation. The president tweeted: "Our thoughts and prayers are with everybody involved. Thank you to our phenomenal Law Enforcement Officers and First Responders that are currently on the scene."

Jackie Speier, the representative for California's 14th Congressional District, where YouTube's San Bruno campus is located, said she was "saddened to hear about another mass shooting" and called on US lawmakers to take action to end gun violence.

Democratic Senator for California Dianne Feinstein said she was praying for the safety of everyone at YouTube's headquarters and that her "stomach sinks with yet another active shooter alert."

US immersed in gun control debate

The shooting at the tech giant's San Bruno campus follows a series of deadly gun incidents at US schools and workplaces, and comes amid fierce political debate on whether to enforce stricter firearms controls in the US.

Around 1.5 million people took the streets across the US on March 24 — under the March for Our Lives banner — to call for stricter gun measures in the wake of a deadly school shooting in Parkland, Florida.

Amid the heated debate on weapon controls, YouTube announced last month that it would ban content promoting the sale of firearms and gun accessories.

Female mass shooters are rare. According to recent analysis by The Washington Post, out of 150 US shootings with more than four victims that have taken place since 1966, only three were done by women. A shooting in San Bernardino, California, in 2015 that killed 14 was perpetrated by a man and a woman together.

US anti-gun march participant: 'The issue involves everyone'