Several killed amid surge in violence in Ukraine

Eastern Ukraine has experienced what's seen as its worst surge in violence so far this year. Both Kyiv and separatist factions blamed each other for killing civilians and soldiers. 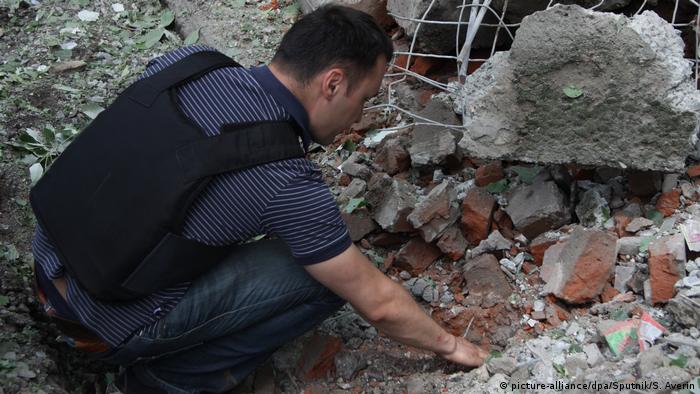 Fighting between Ukrainian forces and separatist rebels in eastern Ukraine escalated on Monday, with officials describing the flare-up as the worst outbreak of violence so far this year.

The latest hostilities highlight the precarious situation there, despite a 2015 peace agreement and diplomatic efforts in recent months to settle it.

'Worst' so far this year

"Last week was in many ways the worst we have seen so far this year," Alexander Hug, a deputy chief of the monitoring mission of the Organization for Security Cooperation in Europe, said at a briefing in Kiev. "In total, we recorded 7,700 cease-fire violations."

Violent methods: Ukrainian authorities have insisted they will only use political and diplomatic methods to restore control over the rebel-controlled areas, while the militants have disputed Kyiv's intentions to do so. The surge in violence reflects obstacles that remain to achieving peace in the region.

Four-year war: The conflict erupted after Russia annexed the Crimean Peninsula in 2014. More than 10,000 people have died in the war that ensued. A 2015 peace agreement signed in Minsk has helped reduce hostilities, but clashes continue.

The two leaders discussed Syria, the conflict in Ukraine, the Nord Stream 2 gas pipeline and the Iran nuclear deal. Merkel was critical on press and cultural freedom as well as a ceasefire breach in Ukraine. (18.05.2018)

In Ukraine's war-torn east, 220,000 children are at risk of injury or death by explosives littering the territory. They have caused scores of deaths, and left many children with "lifelong disabilities," says UNICEF. (21.12.2017)