Hamstrung by huge public debt, Malaysia is planning to use palm oil to buy military equipment, including fighter jets. European defense companies may not be enthused about Kuala Lumpur's latest attempt at barter trade. 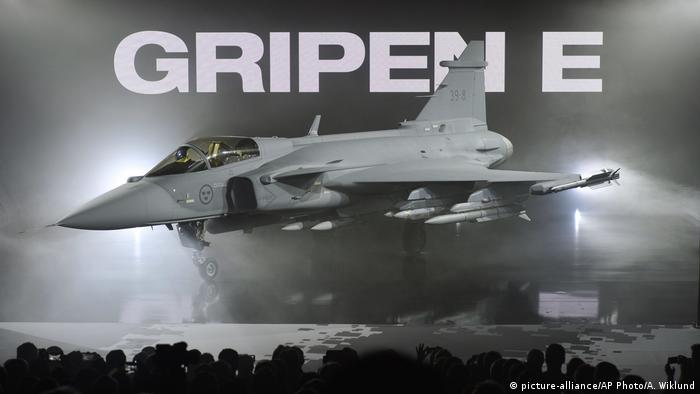 The Southeast Asian country has been hobbled by huge public debt, a slipping currency, corruption and flagging economic growth. In just over a year since coming to power, Prime Minister Mahathir Mohamad's government has already suspended or revised major infrastructure projects worth billions of dollars to rein in costs.

Malaysia is also no stranger to swapping palm oil for military equipment. It bought Russian-built fighter jets using the controversial commodity in the 1990s.

But Malaysia's latest attempt at bartering is likely to complicate matters for European defense companies, which are vying for contracts as Malaysia seeks to modernize its weapons, including its fleet of fighter jets.

"Europe has not generally gone down the barter approach," Scott Clark, the vice president of Global Defense Program at consulting firm Frost & Sullivan, told DW. "It's generally not the model which Europeans are comfortable with. So I don't see Europeans particularly keen to adopt that type of model."

Financial troubles may potentially force Malaysia to drop its plans to buy highly capable multirole combat aircraft (MRCA) and settle for cheaper, less capable fighter jets to replace its current fleet of Russian MiG 29s that are mostly grounded. Europe's MRCA makers Eurofighter and Dassault Aviation have been wooing Malaysia for almost a decade for a deal.

Kuala Lumpur is for now planning to buy 12 to 18 Light Combat Aircraft (LCA) in a deal that could be worth more than $1 billion (€897 million). It has called on various aircraft manufacturers to provide information about the capabilities of their fighter jets.

Among those who have expressed an interest are Sweden's Saab Group and Italy's Leonardo. LCAs such as Saab's Gripen fighter jets are about 30% cheaper than the Rafales and Eurofighter Typhoons. Chinese JF-17s and J-10s, which are also in contention, are even cheaper.

Saab did not comment on Malaysia's barter plans but said it had delivered Gripens to several customers using a range of financing solutions including aircraft leases, lease-to-buy agreements and direct purchases.

"Saab, like all Swedish companies, can also offer export credit support together with the Swedish government, if customers meet the necessary criteria," Petter Larsson, a Saab spokesman, told DW, adding that the company was looking forward to continued discussions with the Royal Malaysian Air Force (RMAF).

Experts say the two could lose out to their competitors from Russia and China if Malaysia insists on paying partly in palm oil.

The commodity has become a flash point in the European Union's relationship with Malaysia, the world's second-biggest exporter of palm oil. The 28-nation bloc is planning to phase out palm oil from transport fuel after the European Commission concluded that palm oil cultivation, with some exceptions, caused deforestation and that its use in transport fuels could not be counted toward its renewable energy goals.

Kuala Lumpur has threatened to boycott EU goods, if the bloc goes ahead with its plan. The Malaysian prime minister ruffled feathers in Europe when in March he said Kuala Lumpur would buy fighter jets from China instead of the EU. Mahathir later downplayed the threat, saying it was "only a suggestion" and that no decision had been made yet.

There are suggestions that some European companies may not even bid for Malaysian contracts fearing adverse impact on their chances amid the ongoing spat.

"The EU has discredited Malaysia for deforestation, loss of biodiversity and the destruction of habitat that is critical for endangered species," Shankaran Nambiar, a senior research fellow at the Malaysian Institute of Economic Research, told DW. "The export markets for palm oil to the West are virtually closed."

Malaysia's wish to divert some of its palm oil supplies — by swapping it for military equipment that it desperately needs — is also a move that could potentially increase the price of the vegetable oil.

"This could complicate defense programs if Malaysia is determined to pursue the export of palm oil in part exchange for EU defense products," Jon Grevatt, the Asia-Pacific industry analyst at Jane's by IHS Markit, told DW. "However, Malaysia, in the past, has shown itself to be very flexible and very open to the transfer of many sorts of commodities and products to support indirect offset."

Malaysia has said China, Russia and Pakistan have expressed their willingness to be partly paid in palm oil for their fighter jets. This is likely to complicate matters for the RMAF, which has traditionally preferred using Western equipment, including on its Russian Sukhoi jets.

Malaysia's latest attempt at barter trade could be beneficial for Russia, which has seen China walk away with many defense deals in the region and undercut Moscow's arm supplies. Russia has a long track record of swapping weapons for commodities in the region, including as part of its fighter jet deals with Indonesia and Vietnam.

Chinese jets also stand a good chance. Malaysia shares strong political and economic ties with China, which is its largest trading partner. Chinese Malaysians make up almost a quarter of the country's population.

But buying Chinese jets could also be problematic for Malaysia not least because Beijing remains the country's biggest security concern in the South China Sea.

"There is a problem with over relying on China especially for big-ticket items like warships and jet fighters," defense analyst Collin Koh, from the S. Rajaratnam School of International Studies at Singapore's Nanyang Technological University, told DW. "So even if Malaysia operates Chinese warships in its navy, it might not actually be wise to turn to China for another big-ticket item like fighter jets."

There are also concerns related to difficulties in integrating Chinese jets with existing systems and weapons used by the Malaysian air force, which could lead to additional costs and also hurt the effectiveness of Malaysian defense forces.

"There might be a cost in terms of training and seamless information flows across existing assets, but that is probably a secondary issue in the face of low growth, high debts, a slipping ringgit [Malaysian currency] and a threatened oil palm sector," Nambiar said.

The EU's biofuel policy was meant to help the climate. Instead it's been linked to loss of rainforest because of its reliance on palm oil. New rules aim to phase out the oil but the problem runs deeper, say experts. (22.08.2018)

Palm oil: Too much of a good thing?

Palm oil can be used in everything from cosmetics to fuel, and is cheap and efficient to produce. But this versatile crop has a dark side — its incredible popularity has caused widespread environmental destruction. (07.08.2018)