The US children's television show has released videos featuring two new Muppets to educate children about race.The non-profit Sesame Workshop aims to "provide families with the tools they need to build racial literacy." 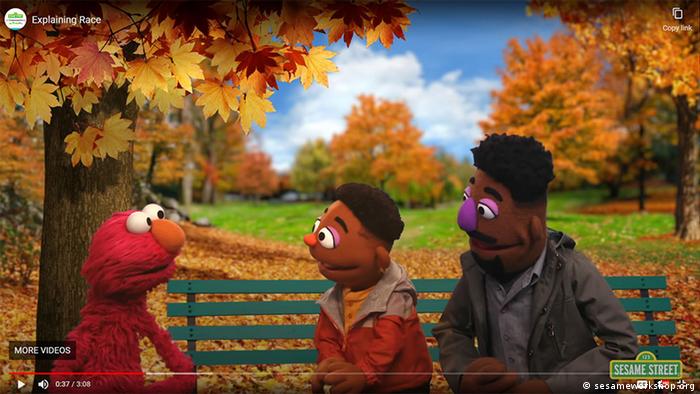 African-American dad Elijah and his son Wes are featured in one of the videos, talking to well-loved furry red Muppet Elmo about differences in skin color due to melanin.

In a roughly three-minute segment, the Muppets stress the importance of not forgetting that despite differences in appearance we are all human.

The new Muppets were introduced as part of the "ABCs of Racial Literacy" video resources, produced by non-profit Sesame Workshop as part of its commitment to social justice.

Talking to children about race

Sesame Workshop, the non-profit behind Sesame Street, said it wants to "provide families with the tools they need to build racial literacy, to have open conversations with young children."

"The work to dismantle racism begins by helping children understand what racism is and how it hurts and impacts people," Kay Wilson Stallings, Sesame Workshop's executive vice president of creation and production explained.

The long-running educational show has introduced a number of puppets over the years to draw attention to diversity.

Sesame Street producers introduced Alex, a character with an incarcerated father, in a special educational video released in 2013.

Julia, a Muppet on the autism spectrum, debuted on television in 2017.

Kami, a Muppet who contracted HIV through a blood transfusion, was introduced on "Takalani Sesame," the South African edition of Sesame Street, in 2002.

In 2019, Sesame Street announced it was planning a season of episodes for Middle Eastern countries with trio of refugee puppets.

In another video due out soon, Muppets portraying characters of Hispanic origin will be confronted with "a racist incident in a grocery store," Sesame Workshop said.

kmm/rc (AFP contributed to this report)