Dozens of Kosovo Albanians have blocked a road to prevent Serbian President Aleksandar Vucic from visiting a Serb-populated enclave in Kosovo. Vucic has criticized NATO peacekeepers for not preventing the blockade. 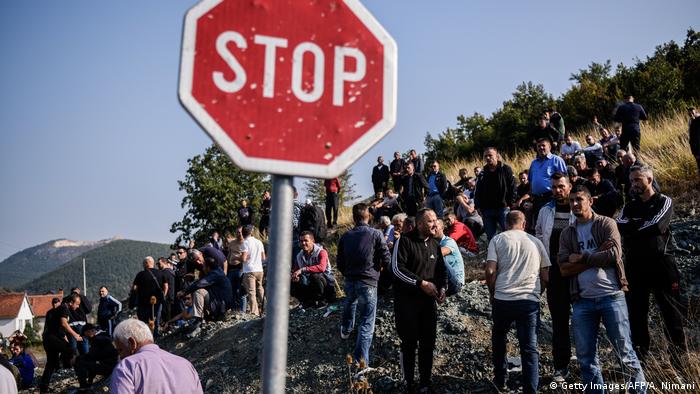 Addressing supporters in Kosovo's Banje village by phone on Sunday, Serbian President Aleksandar Vucic apologized for not being able to meet them in person.

"I am very sorry I couldn't come because the authorities in Pristina didn't want me to," Vucic told residents of the Serb-populated enclave. 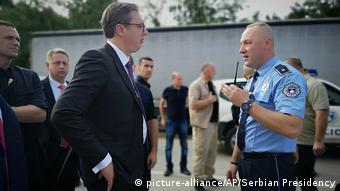 Ahead of Vucic's planned visit hundreds of Kosovo Albanians, including 200 Kosovo war veterans, had blocked access to Banje.

Some held up placards with messages such as "Vucic does not pass" and "Those who committed genocide against innocent civilians cannot pass."

Serbian media also reported gunfire near the area, but that could not be independently verified.

'We won't allow anyone to harass Serbs': Vucic

Vucic slammed NATO-led peacekeepers for not clearing the blockade and accused Kosovo Albanian authorities of backing it.

"I don't like guns, but we won't allow anyone to harass Serbs in Kosovo," Vucic said. Serbian Interior Minister Nebojsa Stefanovic blamed former Kosovo Liberation Army soldiers for the blockades.

Vucic had planned to visit Banje as part of a two-day visit to Serb-dominated areas in Kosovo. The majority of Kosovo's Serbs live in northern areas bordering Serbia.

Kosovo declared its independence from Serbia in 2008, almost a decade after the end of the 1998-1999 Kosovo war and NATO airstrikes which drove out Serbian forces and halted the killing of ethnic Albanian civilians. More than 100 countries have since recognized Kosovo as a sovereign state.

Reacting to the blockade controversy on Sunday, Kosovo's President Hashim Thaci wrote on his Facebook page that he "fully understands" the reaction of Kosovar citizens.

Thaci said the blockade "shows that the pain and war injuries are still fresh," but admitted that as Kosovo and Serbia are seeking to mend ties, "the protests and roadblocking don't help us."

"We should know to rise beyond ourselves, beyond the injuries and manifold pain. We should do this on behalf of peace and reconciliation," he wrote.

Territory exchange in the works?

Vucic was in Kosovo for a two-day visit amid speculation that the two regions were moving toward normalizing relations and talks of a possible territory exchange.

On Saturday, Vucic warned it would be difficult for Serbia and Kosovo to mend ties while there is European opposition to changing borders in the Balkans.

Vucic said Serbia wants to be on friendly terms with Kosovo — a requirement for EU membership — but does not recognize its 2008 declaration of independence.

He had been due to meet with Thaci but their meeting was abruptly canceled on Friday.

"I will do my best [to reach the agreement], but it is a long road full of thorns and problems ahead," Vucic told reporters during a visit to the Gazivoda Lake dam, control of which is a source of controversy between Belgrade and Pristina.

The land swap idea has drawn opposition over concerns it would result in demands for similar deals in the volatile region.

Vucic must seal an agreement with Pristina to move forward in accession talks with the European Union. Kosovo, on the other hand, hopes recognition from Belgrade would facilitate membership in the United Nations.