Anti-government protests in Serbia have entered a fourth month, as thousands gathered in Belgrade. Demonstrators have called for an end on what they call President Aleksandar Vucic's stranglehold of the media. 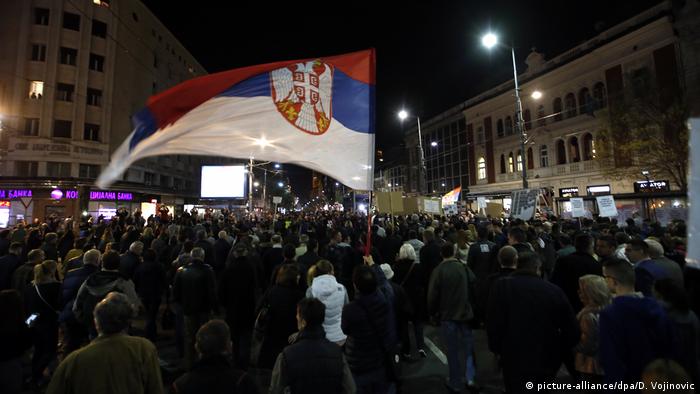 Several thousand protesters surrounded Serbia's state broadcaster RTS headquarters on Saturday, as part of continued anti-government protests. The move was a call from demonstrators for greater media freedom in country.

The protests against Serbian President Aleksandar Vucic entered their fourth month with another large rally in the capital, Belgrade.

Demonstrators have been gathering there every Saturday since December 8, routinely drawing more than 10,000 people. But protests have also taken place in some 20 cities and towns across the country.

The crowd booed and jeered outside the TV building in central Belgrade, expressing their discontent with what they consider to be the station's biased reporting. Protesters blockaded the entrance to RTS for roughly one hour.

Protesters have demanded for an end to Vucic's stranglehold on the media. Opponents accuse Vucic's government of fostering hate speech and divisions while curbing democratic freedoms. 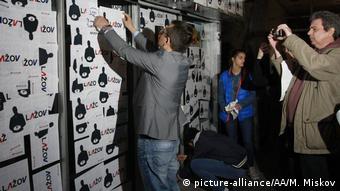 Demonstrators covered the doors of RTS headquarters with flyers

Vucic, a former nationalist who says he wants to lead Serbia into the European Union, has denied the accusations against him.

The movement against Vucic was sparked by the assault on opposition politician Borko Stefanovic in late November.

Initially dubbed "stop to bloody shirts," the movement has recently adopted the slogan "one of 5 million," a jab at Vucic, who said after early protests he would not bow to a single demand from protesters, "even if there were 5 million of you."

A momentous step shrouded in secrecy is currently underway: Serbia and Kosovo are planning to trade territories. But shifting borders in the Balkans is a mistake, writes guest policy expert Christian Schwarz-Schilling. (02.03.2019)

Serbia: Tenth round of anti-Vucic protests held in Belgrade

The 10th round of protest rallies against President Aleksandar Vucic were held in freezing temperatures in the Serbian capital and other cities. The ultranationalist Vucic rejects claims he has become autocratic. (10.02.2019)