Serbia: Tenth round of anti-Vucic protests held in Belgrade

The 10th round of protest rallies against President Aleksandar Vucic were held in freezing temperatures in the Serbian capital and other cities. The ultranationalist Vucic rejects claims he has become autocratic. 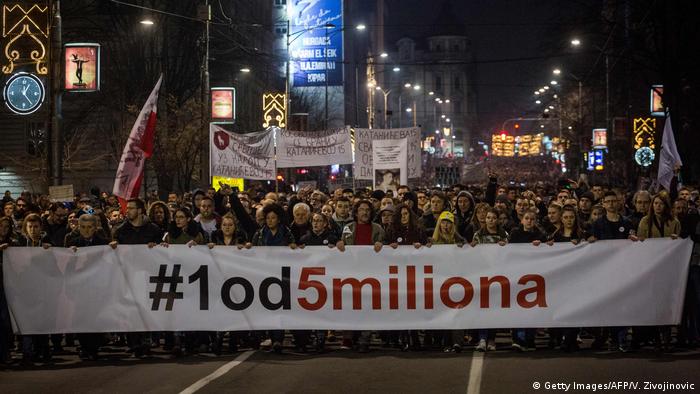 The 10th consecutive weekend of "Protest Against Dictatorship" rallies in Serbia saw protests in 40 towns and cities, including the southern city of Nis, northern Novi Sad, and central Kragujevac and Cacak.

There were no political party flags as thousands of people gathered to protest what they called a climate of "political violence" created by Vucic and his Serbian Progressive Party. In December, the home of online journalist Milan Jovanovic was torched in Belgrade. A year ago, Kosovo Serb politician Oliver Ivanovic was murdered.

The demonstrators in Belgrade blew whistles and held flags as they walked near parliament, the presidency and national media outlets controlled by Vucic and his party. 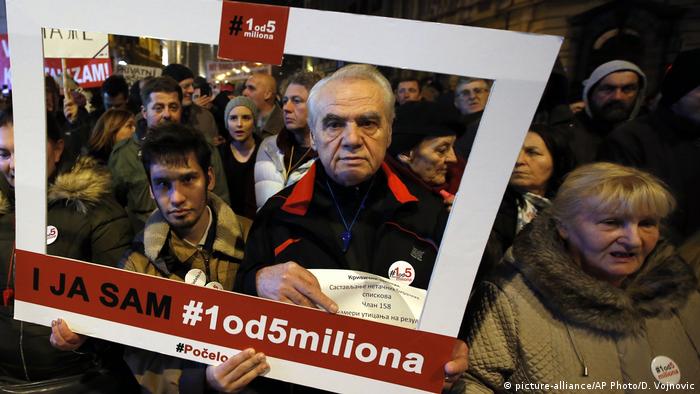 "Even if there were 5 million people in the street," Vucic said he would not agree to their demands

Vucic campaigns for next election

Vucic denies accusations of electoral abuse and manipulation of the media and has launched a "Future of Serbia" campaign, hinting at early elections this spring as a concession to the demonstrators. However, he is famous for having said after the first demonstration: "Even if there were 5 million people in the street," he would not agree to the protesters' demands.

A group of opposition leaders last week drafted an "agreement with the citizens" listing their next steps, including not to take part in an election until the conditions for a free and fair vote are met.

In recent weeks, Vucic has visited various towns to present his policies ahead of the next elections, due in 2020. The 48-year-old served as prime minister from 2014 until he became president in 2017. 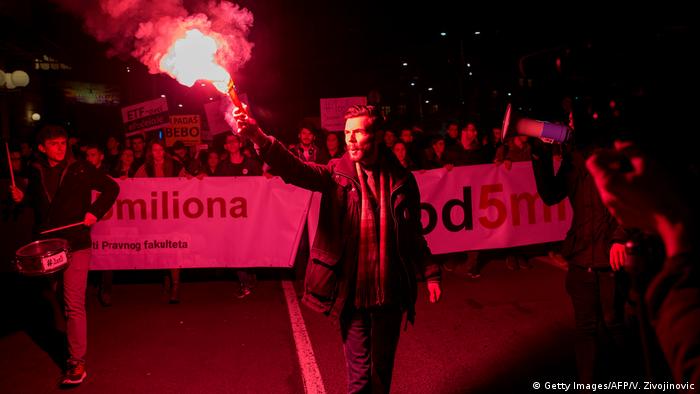 Serbia's opposition parties remain badly divided but their leaders and members have joined the protests, together with students and academics, as well as some lawyers, judges, writers, actors and singers. The list of demands remains vague, with the organizers backed by dozens of parties and groups refusing to place themselves under the umbrella of opposition politicians.

Opposition groups have expressed a reluctance to take part in any snap elections under what they consider to be unfair conditions. Instead, some have called for a transitional government of technocrats with a one-year mandate to prepare for fair elections while others are proposing a boycott of national and regional parliaments.

Greeted by church bells, gun salutes and a puppy, Russia's Vladimir Putin arrived in Belgrade. The lavish event is seen as an attempt by Serbian President Aleksandar Vucic to boost his image after weeks of protests. (17.01.2019)