Ukrainian President Petro Poroshenko has raised the idea of holding a referendum on the decentralization of power to the country's cities. The proposal has been immediately snubbed by pro-Russian rebels. 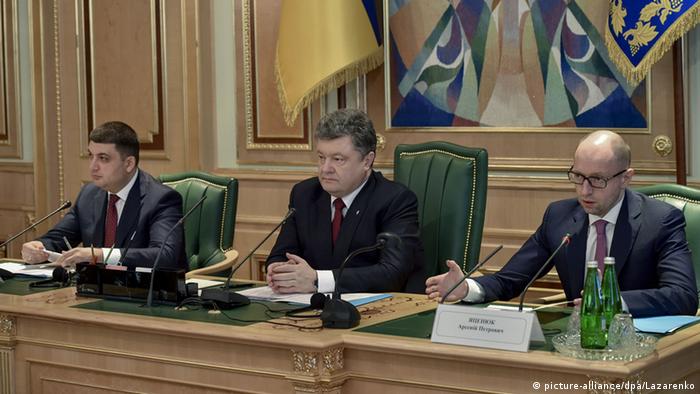 Speaking on Monday in Kyiv at the first meeting of a constitutional commission set up to carry out political reforms required under February's Minsk peace accord, President Poroshenko said he was "ready to launch a referendum if you decide it is necessary."

The Ukrainain leader said "decentralization" would concern "not regions but the city, village and territorial community" and would focus not on the question of "federalization," which is favored by separatist leaders in east Ukraine.

"Federalization is like an infection, a biological weapon which they are trying to impose from outside Ukraine ... to destroy our unity. And we will not allow it," Poroshenko told the constitutional commission.

A rebel spokesman for the self-proclaimed pro-Russian rebels "Donetsk People's Republic", Denis Pushilin, quickly rejected the notion of working with the Kiev commission.

"The people who represent Donetsk in Kiev do not represent us," Pushilin said.

As the commission began work on constitutional reforms on Monday, Poroshenko also said that powers in Ukraine will be decentralized but not defense, security or foreign policy.

The commission was established in response to international demands following the uprising by pro-Russian separatists in the east of the country last spring.

Key issues include the possibility of special economic ties between Russia and south-eastern Ukraine, as well as a ruling on the language question in the region, where many people speak Russian as well as Ukrainian. Poroshenko, however, has said Ukrainian must remain the official language.

The Ukrainian president has also rejected a federal solution to the unrest, saying Ukraine "was, is and will remain a unified state.

Separatist shelling increased over Easter weekend, with Ukraine's military reporting several casualties. Fighting had been dwindling since the Minsk ceasefire was implemented in February. However, both the Ukraine military and pro-Russian separatists continue to blame each other for violating the pact.

The conflict in the region has claimed roughly 6,000 lives since last March.

Facing a growing humanitarian crisis, the separatist leaders of eastern Ukraine have written an open letter to German Chancellor Merkel and French President Hollande. The region is entering its second year of war. (05.04.2015)

Demonstrators across Germany have used the Easter holiday to protest against Germany's involvement in foreign wars and the weapons trade. The tradition of "Easter marches" goes back decades. (04.04.2015)