Seoul climate summit kicks off with call for cleaner planet

The 2021 Partnering for Green Growth and Global Goals 2030 summit has begun in Seoul. World leaders and other participants are calling for concrete climate actions. 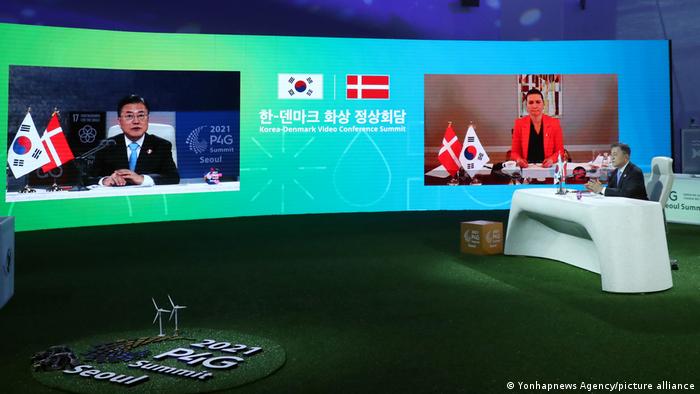 A virtual climate summit got underway in South Korea on Sunday with pledges to play a bigger role in the drive towards a greener global economy.

The 2021 Partnering for Green Growth and the Global Goals 2030, or P4G, brings together various world leaders to discuss how public-private partnerships, especially in developing countries, can help achieve the goals agreed on in the 2015 Paris accord.

"South Korea will play a responsible role as a bridging nation between developing and advanced nations," South Korean President Moon Jae-in said in his opening speech.

This year's P4G summit is the second of its kind after it first took place in Copenhagen in 2018. It comes ahead of this year's delayed UN Climate Change Conference, also known as COP 26, which will be held in the Scottish city of Glasgow in November.

The Seoul-hosted event is focused more on actionable solutions to meeting the commitments made in the 2015 Paris climate accord, which aim to keep global warming below a 2-degree Celcius (3.6-degree Fahrenheit) increase from pre-industrial levels, and preferably closer to 1.5 degrees.

What has South Korea pledged?

South Korea has set itself the target of zero emissions by 2050 and to reduce emissions by 37% in relation to business-as-usual levels by 2030. It also plans to stop funding coal plants in other countries and to introduce a carbon tax.

'We have to step up' and reduce emissions

Moon pledged to raise its greenhouse gas reduction targets — which he will announce in Glasgow — and also laid out plans for a $5 million (€4.1 million) "Green New Deal" fund by 2025 to aid developing countries' transition to renewable energy.

Are countries on course to meet their climate commitments?

Other world leaders have also recently stressed the importance of meeting climate goals.

Germany said it would commit to reducing its CO2 emissions by 65% by 2030 following a landmark ruling by the country's top court which declared the previous target as "insufficient."

German Chancellor Angela Merkel has called on other countries to phase out their dependency on fossil fuels.

So far, many of the world's largest emitters of CO2 have failed to take any drastic action to meet their commitments and there has been no agreed course on how emissions will be cut globally.

The UN has said that emissions must fall by 8% annually if the planet is going to stick to maximum warming of 1.5 degrees — that is the equivalent to the amount saved during the coronavirus pandemic in 2020.