Self-immolation of Russian journalist Irina Slavina: ′The silence of most people was traumatizing for her′ | DW Freedom | Speech. Expression. Media. | DW | 06.10.2020

Self-immolation of Russian journalist Irina Slavina: 'The silence of most people was traumatizing for her'

Russian journalist Irina Slavina died after she set herself on fire in front of the police building in Nizhny Novgorod. DW spoke to people who knew the late journalist. 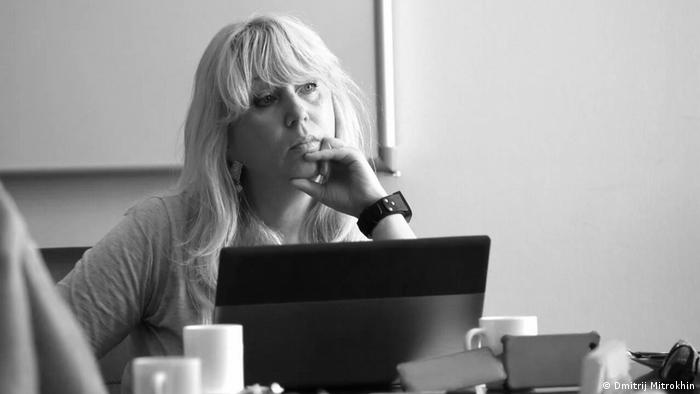 Irina Slavina fought against injustice in her country

On October 2, Irina Slavina, editor-in-chief of KozaPress in Nizhny Novgorod, Russia, wrote on Facebook: "I ask you to blame the Russian Federation for my death." Minutes later, she set herself on fire in front of a police building. The 47-year-old was killed instantly.

Slavina worked as a teacher of Russian language and literature, then as a journalist for regional media. In 2015, she lost her job for the third time when she had to leave the local news agency News-NN due to censorship. Convinced that no media company would dare to work with her anymore, Slavina founded the independent media company KozaPress – in English: "Goat Press." She worked as a publisher, editor and correspondent at the same time. KozaPress, financed by donations, quickly became one of the most popular media in the region.

"A feeling of powerlessness"

Slavina's articles were well known in the city, local officials and businessmen were even afraid of her, says Svetlana Kusewanova, a lawyer at the "Center for the Protection of Media Rights". There have been several trials against the journalist in recent years. "This is what happens to active Russian media that do not write about flowers and cows," emphasizes Kusewanowa. The fines against Slavina: 70,000 rubles (760 euros) for alleged contempt of the authorities based on a Facebook article about the opening of a memorial plaque to Soviet dictator Stalin, 65,000 rubles (705 euros) for a text with allegedly false information about the corona virus in the city of Kstovo, although the authorities had confirmed the cases, and 5,000 rubles (54 euros) for links to an “undesirable” organization. 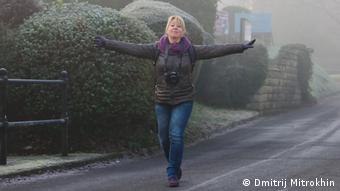 Irina Slavina: An advocate for change in Russia

"She was punished for all kinds of things. In addition, insulting leaflets were stuck to the entrance of her house and her car tires were slashed. She lived in this hell for many years," says Stanislav Dmitrievsky, human rights activist in Nizhny Novgorod. According to him, Slavina was a very calm and self-confident person, "but a volcano was burning inside her." She could not bear the injustice in the country. "The silence of most people was traumatizing for her. It gave her a feeling of powerlessness," said the activist. He is convinced that the house search on the previous day caused the journalist to set herself on fire.

At six o'clock in the morning, twelve security guards broke down the door to Irina Slavina's apartment. They immediately took the journalist's phone, preventing her from calling her lawyer. They searched for clues on the cooperation with the organization "Open Russia" founded by Kremlin critic Mikhail Khodorkovsky. According to Khodorkovsky, his organization works for democracy and human rights. In 2017, it was classified as "undesirable" by the Russian authorities. Cooperation with such organizations is prohibited in Russia and can be punished by imprisonment. Irina Slavina had nothing to do with "Open Russia," explains the managing director of the organization, Andrei Piwovarov.

The guards were looking for material from the organization: "Brochures, leaflets, accounts of 'Open Russia', possibly for an icon with the face of Mikhail Khodorkovsky," Slavina wrote on her Facebook page after the search, adding: "I have none of these.” Before the search, she had been asked to hand over papers to the authorities about the organization that allegedly finances protests against the development of a park in Nizhny Novgorod, Slavina said in an interview.

Six more people were searched on that day. Among them: Alexei Sadomovsky, vice-chairman of the regional association of the opposition party "Yabloko" in Nizhny Novgorod. "It is humiliating and frightening," Sadomovsky said. He suspects that for Irina Slavina, this action by the authorities was "the last straw" that lead to her self-immolation.

"She didn't complain, didn't say that she was having a hard time. We all seem to have underestimated the pressure and were not attentive enough," says Arkady Galker, head of the office of the human rights organization "International Memorial" in Nizhny Novgorod. "This is not the suicide of a tired woman, but the result of state terrorism, of incredible state pressure," Galker emphasizes. He calls for those who "terrorized the journalist Slavina in recent years" to be brought to justice. 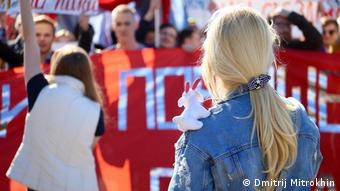 Increasing pressure on the opposition

Sadomovsky, too, believes that Slavina's suicide is above all "a political gesture. It was an attempt to draw attention to the problems she had been talking about," the politician said. According to Sadomovsky, pressure on the opposition in Nizhny Novogorod has recently increased sharply, especially in connection with the local elections in early September. But Slavina had mostly joked about it and one could never say that she had let her courage sink.

"Irina Slavina was very honest, a good person. She really wanted to improve her city and her country. To spread the truth was probably her most important mission," Sadomovsky said. The journalist’s lawyer Svetlana Kusewanova told DW: "She was a very easy-going but very consistent person and considered the courts an integral part of her work."

The evening after the journalist's death, about 150 people gathered in the city center to commemorate her. Flowers, photos, posters and candles were laid where Irina Slavina died. The next morning, everything had been removed by unknown persons.