Seaweed Wine Hits Germany′s Stores | News and current affairs from Germany and around the world | DW | 04.05.2006

German marine biologists are doing their bit to improve Germany's culinary reputation with a campaign to get Baltic seaweed recognized as a delicacy. A seaweed wine is already retailing at 22,50 euros ($28) a bottle. 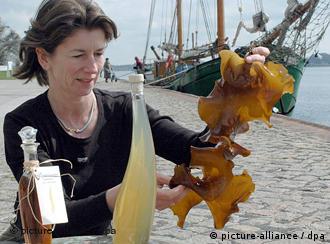 Inez Linke says it with seaweed

The granite depths of the Baltic Sea are a far cry from the sunny slopes of French vineyards, but bon vivants shouldn't under-estimate the potential of this unprepossessing corner of the earth. It's here that scientists are cultivating what they say is the only vegetable which doesn't require freshwater and lends itself perfectly to innovative diets -- seaweed. In a nation famed for its love of cabbage and turnip, that doesn't sound as bad as it might elsewhere.

Of the world's 40,000 types of seaweed, the experts -- at last in Germany -- say some 160 are edible. A staple feature of the Asian diet, marine biologists at the Alfred Wegener Institute for Polar and Ocean Research now feel it's high time that Germany woke up to its gourmet possibilities -- and have the government on their side with support amounting to 100,000 euros ($127,000)

Tasty -- and healthy, too

Seaweed's many uses extend far beyond its standard incarnation as a sushi wrap. 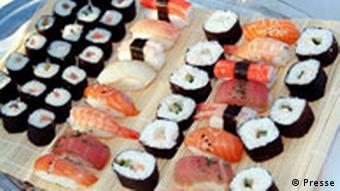 Seaweed as most people know it

It might be an acquired taste, but Inez Linke from the institute says that wine made from brown laminaria saccharina seaweed actually tastes like a fine sherry and is extremely wholesome.

"Sommeliers say it's an intense terroir wine with a marzipan flavor," she said. "Marine algae contain many minerals, salts, vitamins and proteins that makes it extremely healthy and boosts the immune system," said Linke.

Planted in December, the Baltic seaweed is matured in water eight meters (26 feet) deep for around six months, and harvested by divers in May and June.

Linke says the wine already has a growing fan base of connoisseurs and chefs, who use it in cocktails and haute cuisine, and she now hopes to sell the wine throughout Europe and the rest of the world.

Young, "hip" TV cooks including and modeled on Britain's Jamie Oliver have developed a significant audience in Germany. It looks like the "cooking is cool" craze has finally taken off here -- or has it? (May 16, 2005)

Germany a gourmet paradise? Don't scoff -- the land of sauerkraut and schnitzel is second only to France when it comes to Michelin three-star restaurants. (Nov. 23, 2005)

It's long had a bad rap as a sidekick to greasy sausages or significant chunks of a pig's leg, but sauerkraut is not just a boring accompaniment to the heavier types of German food, as aficionados are trying to prove. (April 6, 2004)

The ARD is the joint association of Germany's regional public-service broadcasters. It also includes Deutsche Welle.