In the quest for a treatment for COVID-19, progress is slow and requires both time and massive funding. Two German biotech firms are hotly tipped to be in the lead, but can they forge a breakthrough? 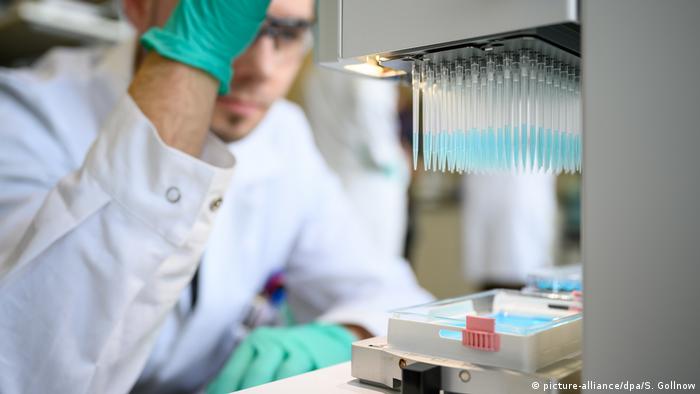 "An der Goldgrube 12" — literally translated "At the Goldmine 12" in English — is the postal address of German biotech firm Biontech in Mainz, Germany. The name is apt because the company could indeed strike it rich if it succeeds in its newest undertaking: finding a vaccine against coronavirus and the lung disease COVID-19 it causes.

So far, Biontech has been developing drugs against cancer, but a recent cash injection from Chinese drugmaker Fosun Pharma would allow it to speed up its efforts in the global race to find a vaccine against the novel pathogen, Biontech announced Monday (March 17). The Chinese offered €120 million ($133.3 million), some €44 million of the sum are in exchange for shares in Biontech.

But Fosun Pharma is not the only player chasing the pot of gold in the ever expanding global market for pharmaceuticals. During a series of international funding rounds, partnership deals with drugs companies and an October listing on the US Nasdaq technology exchange, Biontech has been able to collect $1.4 billion (€1.25 billion) from other investors for its research.

In the battle against coronavirus, global alliances and company partnerships are currently being built. That's nothing unusual, says Siegfried Throm, a senior official in the German Association of Research-Based Pharmaceutical Companies (vfa). The more companies are involved in the search for a coronavirus vaccine, the better are the chances of finding one, he told DW.

"There's a worldwide race for a vaccine currently underway, including efforts by companies and commercial consortia, but also activities launched by science organizations, specifically in the United States and China."

According to the Vfa, a total of 39 drugs projects around the world are currently devoted to finding a vaccine, with many of them supported by the Coalition for Epidemic Preparedness Innovations (CEPI), which is financing and coordinating the development of vaccines against emerging infectious diseases.

CEPI's current list of recipients includes German pharma company CureVac alongside US firms such as Inovio, Moderna and Novavax. Vaccine projects run by the Australian University of Queensland and Oxford University in Britain are also supported.

What researchers and their supporters detest, however, are attempts by companies, individuals or even states to secure exclusive rights to potentially successful coronavirus cures.

Last week, US President Donald Trump was making big headlines internationally for allegedly attempting to buy out the vaccine research of Germany's CureVac with a large sum. The Tübingen-based company, however, denied that such an attempt was made by the US president or any other US government official.

"We haven't received such an offer," a CureVac statement said, and the company's majority shareholder, Dietmar Hopp, added: "If we were to be successful in developing a viable vaccine against coronavirus, hopefully soon, we are going to make it available not only for people in this region, but to protect and help people all around the world in solidarity."

As the story continued to spread around the world in a virus-like manner, CureVac on Tuesday saw itself forced to issue a stronger denial on Twitter.

Nevertheless, the incident has spurred German and European officials into action, with the European Commission offering the company further financing to the tune of €80 million to speed up its research. 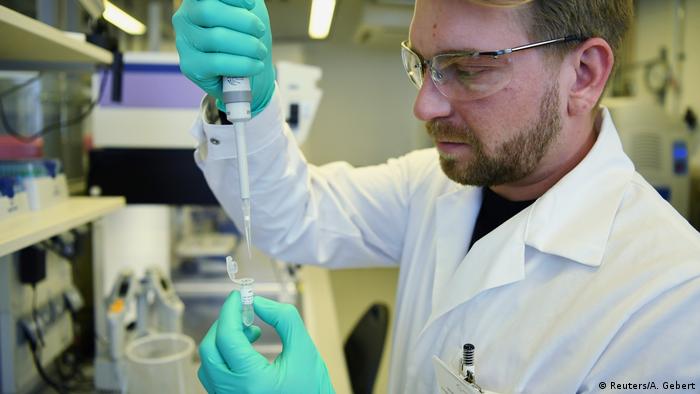 German biotech at the cutting edge?

Biontech and CureVac are certainly flagship companies in the German biotech ecosystem that included about 400 enterprises and 50,000 employees, according to figures dating from 2018.

But the two companies are not representative for a sector that, in general, is punching below its weight, says Siegfried Bialojan, biotech expert at the EY consultancy. German biotech companies are lagging far behind their international rivals, he told DW, given the "huge" potential provided by the strong state-funded research landscape in Germany.

Vfa official Siegfried Throm echoes this view by saying that the German bio-tech landscape may be shining on a European level, but compared with global developments there is a "lack of founding spirit."

"The pioneering spirit in the US is generally stronger, because there the risk to fail is much more accepted than Europe," he says.

A primary reason for the biotech sector in Germany lagging behind competitors elsewhere is certainly a shortage of venture capital for new companies on the scene. In the US, such seed capital often comes from the country's huge pension funds. Unlike in Germany, where statutory pensions are funded through a pay-as-you-go system, these funds are allowed to seek better returns on capital markets with their investments.

In a 2018 study, EY researchers clearly identified this as a disadvantage for the German startup landscape in general. But for the capital-intensive biotech sector, the report says, the funding drought even resulted in fewer startups being founded than was possible.

Developing a drug or medicine until its ready for the market usually takes between 13 and 20 years. Costs can easily rise into the millions of dollars during that time, but can even reach more than a billion. The risk of failure is enormous, because only a small number of the drugs under development will actually reach the shelves of pharmacies, with a staggering 90% of all biotech startups folding in the wake of a failed drugs project.

The winners take it all

Moreover, the bulk of venture capital funding only goes to the most promising startups, says Siegried Bialojan, the author of the 2018 EY study, even though total funding reached a record. "Quite obviously, the German startup funding ecosystem isn't working," he argues.

What's also proving to be an impediment to German startups is the culture of loan funding deeply ingrained in German business practice. Commercial banks' risk aversion in view of the massive financial requirements and long development periods in the biotech sector will make alternative sources of providing capital to them a necessity.

Vfa's Siegfried Throm suggests drawing upon the good experiences made in China, Israel and Switzerland, which all launched state-backed capital funds to support their founders in risky sectors. "Insurance companies, for example, could be allowed to invest about 1% of their capital in high-risk companies through state funds," he says.

Although Germany has established three of those mixed private-public funding vehicles since 2005, each of them holding €300 million, vaccine developer CureVac prefers to rely on German billionaire and SAP founder Dietmar Hopp for its funding.

Hopp has spent €1.5 billion from the fortune he made by launching the only globally significant German software company on biotech startups, with CureVac being one of them. The financiers behind Biontech are also billionaires, the Strüngmann brothers, who founded drugmaker Hexal.

Coronavirus vaccine in the making

The search for a vaccine against coronavirus, however, will take less time than is usually normal in the pharmaceutical sector, says Throm, because there's "a lot of basic research has already been done on the virus."

"Experts think that we'll have a vaccine ready for use in about 18 months if testing turns out successfully."

Meanwhile, US company Moderna, which collaborates with the country's National Institutes of Health (NIH) has announced clinical tests in 45 people to start this month. Drugmakers Biontech and Inovio said they would launch testing in humans in April, while CureVac said it will follow in July.