The US has started testing a potential coronavirus vaccine on healthy volunteers in Seattle. While the first stage of testing was "launched in record speed" it will likely take many months before its ready, experts warn. 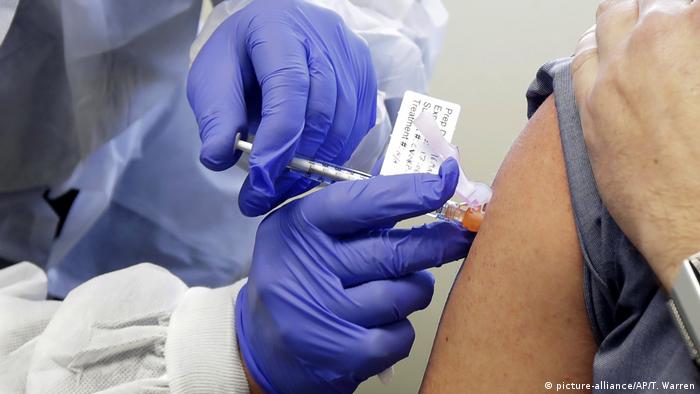 The first human volunteer received a dose of a potential vaccine for COVID-19 in the US on Monday, in a key step in the fight against the new coronavirus responsible for the ongoing pandemic.

The new product was developed by the US National Institutes of Health (NIH) scientists and collaborators at biotechnology company Moderna. For the first stage of human trials, the researchers aim to inject a total of 45 healthy adults with the "investigational vaccine" — dubbed mRNA-1273 — within the next six weeks in Seattle.

"Finding a safe and effective vaccine ... is an urgent public health priority," said Anthony Fauci, head of infectious diseases at the NIH.

"This Phase 1 study, launched in record speed, is an important first step toward achieving that goal," he added.

Chinese authorities first acknowledged the outbreak of the new coronavirus in late December, with the virus quickly spreading to other countries and triggering a global crisis. In January, Chinese officials shared its genetic sequence. This allowed medical teams and labs across the world to start working on a treatment.

The virus operates by binding to human cells. The new vaccine contains parts of the virus' genetic information, but doesn't contain the virus itself. Researchers hope the vaccine could trigger the body's defenses and make recipients immune to the actual COVID-19 virus.

However, the NIH has repeatedly stated it would take between 12 and 18 months before all tests are complete and the vaccine is deemed safe for mass use.

Race to the vaccine

In addition to the Massachusetts-based Moderna, many companies and labs across the world are working on their own treatment and anti-coronavirus immunizations.

In Asia, doctors are testing an antiviral drug dubbed "remdesivir," made by the US-based Gilead Sciences. Another US-based company, Inovio, is working on their own version of the vaccine.

Separately, German company CureVac is also developing a vaccine, and was reportedly approached by the Trump administration to create a vaccine exclusively for the US. The firm has since firmly denied those reports, saying it has not received an offer from the US government.