Science Edges Towards a New Generation of Biofuels | Business| Economy and finance news from a German perspective | DW | 15.09.2008

Science Edges Towards a New Generation of Biofuels

DW-WORLD.DE talked to Prof. Eva-Mari Aro, an expert on plant physiology and molecular biology at the University of Turku in Finland, about the current developments in the pursuit of new biofuel technologies. 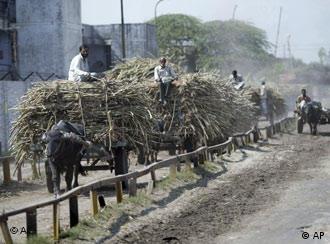 DW-WORLD.DE: What are the most viable alternatives to biofuels like ethanol and how do they work?

Eva-Mari Aro: New generation biofuels can be roughly divided into two groups: fuels, which use biomass as a raw material and systems where living organisms (or biomimicing devices) produce some liquid fuel, hydrogen or other gas directly from sunlight and carbon dioxide.

Biomass based biofuels are already close to real application and their breakthrough is mostly dependent on oil price. However, accumulation of biomass is thermodynamically inefficient process and the conversion of biomass into the form liquid fuel decreases the efficiency more. Biomass has very low efficiency to store energy from sunlight and even in ideal situation they can replace only some percents from fossil fuels. Anyway, they are considered to be a good business when oil prise increases enough.

Biomass independent systems, in contrast, have very high efficacy in theory, and have real potential to replace fossil fuels. However, there are still unsolved technical barriers against the real breakthrough of biomass free systems.

Nowadays ethanol and biodiesel are produced from the same raw materials than food. This is very inefficient and ethically daunting way for fuel production. In order to make system more sustainable, the first step is to replace food-based raw materials by more efficient and ethical feedstock. Practically this means organic waste falls, forests and special bioenergy crops and algae.

Considerable number of research and development is going on in this field. The idea behind is to convert the biomass into the form of biofuel. Most of the resources are in development of physical, chemical and biochemical processes that can be used to produce biofuels from whatever bulk biomass. Other important area is to explore and develop new plants, which are more suitable for biofuel production as compared to the traditional food crops.

Agro, forest and oil industry is already involved in developing these systems and they no doubt believe that this will be a business. Indeed, the conversion of bulk biomass into liquid fuels can strongly increase the biofuel production. However, to be honest, biomass never can replace oil, unless the energy consumption on human population will drop to a fraction of the present one, which will not happen without nuclear war-like catastrophe.

The fundamental problem of biomass is that plants store the energy from sunlight into their biomass very inefficiently. Plants are not evolved to be the feedstock of energy production for human activities. In order to make accumulation of biomass more efficient plants must be pushed to store solar energy many times more efficiently than they do in the nature. However, plants are so complicated organisms that most probably this will be a mission impossible.

As compared to real plants, unicellular algae are simpler and easier to manipulate. Only one type of cell does the all tasks from harvesting the light energy to storage of the energy and for reproduction. Moreover, algae can grow in seawater, which is a great advance when compared to plants.

Under certain conditions algae can double the biomass in one day and large share of this biomass can be starch or oil, which are easy and energy efficient to convert into form of alcohol or biodiesel. This means that algae can be much more efficient feedstock for biomass based biofuels than higher plants, particularly for biodiesel formation.

The most promising feature of algae is, however, that they can produce molecular hydrogen directly from sunlight and water. In the nature, this pathway is a kind of emergency valve and function only under very specific conditions. As such, it has very minor capacity in natural algae. The existence of this pathway, however, gives a great opportunity to bioscientists to use metabolic engineering in order to make hydrogen production very efficient.

What are the benefits of these alternatives?

The main benefit is that there is no competition with food supply. These alternatives are also very efficient. In theory, solarbiohydrogen can be a real option for fossil fuels.

What effect would the production of these alternatives have on the current production processes of biofuels (e.g. use of agricultural land, economies in places like Brazil, the environment, the alleged contribution to the current food crisis)?

In general, sunlight is the driving force of the all new systems. Because algae can grow in salt water, the needed water can be pumped from the seas. When the microalgal solarbiohydrogen systems will be fully developed, indeed, the limiting factor for hydrogen production will be size of bioreactors and availability of solar energy for algal photosynthesis.

In present world, there is nearly absolute negative correlation between GDP and high mean daily irradiance. In the future, when the sunlight will be the main energy source for the need of human beings, the today's poorest countries will have something that rich countries really are craving. This means for sure, that new energy business will colonize these poor but very sunny countries in Africa and Asia.

There is no real democracy in these countries, and because of this, there is a risk that the money will flow to the rulers and solar energy money will spread the "Middle East" all over Central and North Africa. However, if western governments and public organizations monitor the technology transfer, the new energy technology will be a great opportunity to the developing countries.

The basic idea of new generation biofuels is not to compete with resources needed to food production. If in the future the sunny poor countries will be real players in global energy market, it means resources for them. Technology transfer must be linked to the requirements providing that the benefits will be used to modernize the whole society starting from agriculture.

Would the EU be interested in adopting fuels made from these alternatives or are they focused on ethanol and others?

EU has already a roadmap for a hydrogen economy. Ethanol is not the best solution and the EU knows this. Biodiesel from microalgae is a very attractive option for the EU as well.

How easy or hard would it be to produce these alternatives and introduce them into industry and society?

Biomass based systems are quite easy. Basically we have the technology, but low energy prices hinder the scaling up of the pilot scale plants. When the oil price reaches a certain threshold, these technologies will take their part in the energy market.

Solarbiohydrogen, artificial photosynthesis and other these kinds of more advanced systems are still under development and some fundamental questions need to be solved before commercialisation. However, the concept is clear and there shouldn't be anything in this respect that is not possible to solve.

What is needed to make the system run is money and smart people. If industry starts to finance the projects, investments must be a part of their long-term business strategy. Society has to accept genetic manipulation. In advanced bioenergy field we can't do anything without all the tools of modern biotechnology. Anti Genetically Modified Organism (GMO) people really should think what the price of banning GMOs would be.

In general, when massive amounts of hydrogen flow out from bioreactors, everything after that will go fluently. The transfer from an oil economy to a hydrogen economy is just a set of political decisions.

Debate continues to rage over food shortages, rising costs and the link to biofuel production. German cabinet ministers are not in complete agreement over how much biofuels are to blame for food problems. (13.04.2008)

Five people fled an igloo when spotted by police in a Bavarian park. One of them was caught and now faces a charge of breaching coronavirus lockdown rules.

Possible US penalties for the Nord Stream 2 gas pipeline have European companies involved jumping ship. Now, a foundation hopes to get the job done. Environmentalists are incensed and legal experts are skeptical.

Pfizer cuts back vaccine deliveries to EU at 'short notice'

The EU will be getting fewer BioNTech-Pfizer vaccine doses than planned in the coming weeks, as Pfizer tries to amp up its production capacity. Several EU nations decried the situation as "unacceptable."