The German-born president of the EU Parliament, Martin Schulz, says he thinks the coalition of left and right-wing parties in the Greek government is not working. The EU is locked in drawn-out talks over Greek reform. 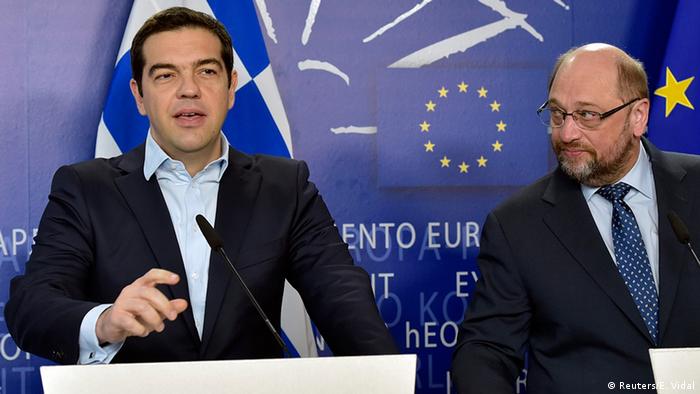 But Schulz's statements threaten to prolong the disagreement, after the EU Parliament president told a German newspaper on Sunday he thought the Greek government in its present coalition was not working out.

"I think the current coalition of the left party with these right-wing populists is a mistake," Schulz told the Frankfurter Allgemeine. The radical leftist Syriza, the party which swept to victory in January and which Tsipras leads, governs Greece with the right-wing Independent Greeks.

The Independent Greeks leader, Panos Kammenos - Greece's defense minister - on Saturday accused Germany of "interfering" in its domestic affairs. His criticism was aimed at German Finance Minister Schäuble, who earlier warned of a "Grexident," which could push Athens out of the euro.

"I don't understand why he turns against Greece every day in new statements. It's like a psychological war, and Schäuble is poisoning the relationship between the two countries through that," Kammenos told Germany's "Bild" daily.

Schulz said Kammenos was not helping matters. Schulz quipped, "The elephant in the china shop seems to me - compared with Mr Kammenos - to be like a finely honed diplomat."

According to the Frankfurter Allgemeine, the Greek government fears it could run out of cash by the end of March. The newspaper said Tsipras called on the European Central Bank (ECB) to throw Athens a financial lifeline.

Greece and the other eurozone countries have been engaged in a drawn-out discussion on finalizing reform plans for Greece. But the process has stalled, with EU member countries, especially Germany, asking Greece to impose more austerity measures and present a concrete plan to cut government expenditures.

Last month, Greece's creditors agreed to extend Athens' bailout until June. However, the release of the final tranche of cash will only be sanctioned if the Greek government's reform plans are approved. Greece has until the end of April to cement the reform plans if it is to receive the 7.2 billion euros (7.6 billion dollars) in remaining international aid.