Schröder Pins Hopes on Vote of Confidence | Germany | News and in-depth reporting from Berlin and beyond | DW | 23.05.2005

If Germany is to go to the polls this autumn, Chancellor Schröder will have to set in motion a complex constitutional mechanism for bringing the elections forward. 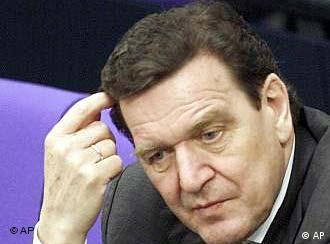 First of all, the chancellor has to submit a motion to parliament to establish whether he still has majority support. The Bundestag vote then has to take place 48 hours after Schröder puts forward what's known as the vote of confidence, set to take place on July 1.

The operative word here is "may." The president can act upon the chancellor's proposal to dissolve the Bundestag, but he doesn't have to. It's up to him to decide whether the chancellor's decision is in keeping with constitutional principles. 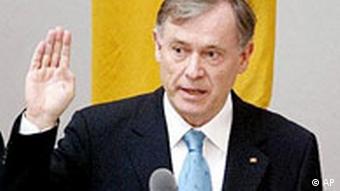 For the time being, President Horst Köhler (photo) has remained silent on the issue. According to his spokesperson, he was carefully considering the matter before meeting with Schröder on Monday.

This, however, presupposes a candidate for office is already waiting in the wings, who can depend on the support of a Bundestag majority. The constructive no-confidence vote makes it harder to remove a chancellor because opponents of the chancellor not only must disagree with his or her governing but also must agree on a replacement

The first time they took place was in 1972, initiated by Chancellor Willy Brandt. He forced the premature dissolution of the Bundestag by President Gustav Heinemann in order to secure a stable majority in the ensuing election, which he won with an impressive relative majority of nearly 45 percent. 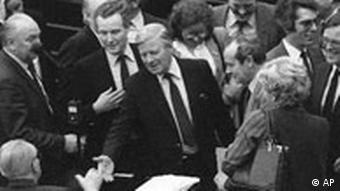 West German chancellor Helmut Schmidt, center, is congratulated by Social Democratic Party's floor leader Herbert Wehner, left, back to camera, when Schmidt has won the vote of confidence. Surrounding are Social Democrats and members of the Liberals on Feb. 05, 1982 in the Bonn parliament. Social Democrat German Chancellor Gerhard Schroeder linked parliament's vote on the German deployment in the war against terrorism on Friday, Nov. 16, 2001, to a vote of confidence in his three-year old government in coalition with the Greens. The confidence vote on Friday will be only the fourth in postwar Germany.

Then, in February 1982, Chancellor Helmut Schmidt called a vote of confidence, winning by 269-224 votes -- despite tensions between the coalition partners, the SDP and the FDP. The Bundestag remained unchanged, but the coalition collapsed seven months later when the liberals joined forces with the CDU. He was subsequently voted out of office in October 1982 through a constructive vote of no confidence. 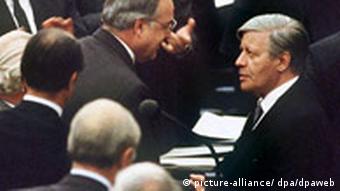 In December 1982, it was Helmut Kohl's turn. He lost by 8-218 votes, with CDU and FDP MPs abstaining. Germany went to the polls and voted Kohl back for a second term.

In November 2001, Gerhard Schröder called for a vote of confidence on German participation in the US-led "Enduring Freedom" mission in Afghanistan -- the largest ever military intervention by the Bundeswehr. He won by just two votes.

Leaders of all German mainstream parties are meeting today to discuss the ramifications of early national elections this fall after the ruling Social Democrats suffered a blow in crucial state elections Sunday. (May 23, 2005)

In a gamble to ensure the backing from his own coalition for sending 3,900 German soldiers to Afghanistan, Chancellor Gerhard Schröder called for a vote of confidence in Parliament. In an historic vote, he pulled it off. (Nov. 16, 2001)

What is a Confidence Vote?

The current debate in the German Parliament focuses on whether or not Chancellor Gerhard Schröder has enough support from his coalition to continue governing. (Nov. 15, 2001)