School shooter’s father charged with manslaughter | Germany | News and in-depth reporting from Berlin and beyond | DW | 27.11.2009

German prosecutors have filed criminal charges against the father of a teenager who killed 15 people in a shooting spree in March. Victims' relatives have demanded that he pay for leaving the murder weapon unsecured. 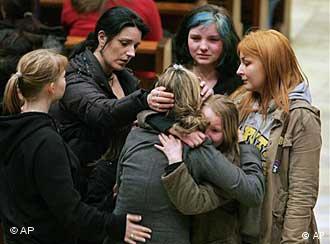 A spokeswoman for the public prosecutor's office in the southwestern city of Stuttgart said on Friday that the father of Tim K. had been charged with 15 counts of negligent homicide. A trial date is yet to be announced.

In March, the 17-year-old killed nine students and three teachers at his former high school in Winnenden, near Stuttgart in the state of Baden-Wuerttemberg, before fatally shooting three others. He then took his own life during an exchange of gunfire with police.

Authorities have said Tim K. used a 9mm Beretta pistol that belonged to his father, Joerg K., who they say kept the gun unsecured in his bedroom, a violation of German law.

It later came to light that the teenager had been treated for depression.

After the shocking incident, the shooter's parents wrote an open letter expressing their sorrow. They said they had never imagined that their son could be capable of such violence.

"Until this terrible event we were a completely normal family," the family said in that letter.

Prosecutors had originally intended only to fine Joerg K. for not locking up the gun and the ammunition used in the rampage.

However, victims' relatives demanded a trial, saying the father had shown "gross negligence" in giving his "mentally ill" son "access to a weapon and 400 rounds of ammunition."

Following the March killing spree and subsequent incidents of violence in schools, there have been calls to strengthen gun-control laws in the country. Germany's police union has also called for a comprehensive early warning system for schools that would include the presence of social workers and psychologists.

Relatives of the students killed in the Winnenden school massacre in March have founded a foundation aimed at preventing other school shootings. The foundation was celebrated with a sermon at a local church. (19.11.2009)