Relatives of the students killed in the Winnenden school massacre in March have started a foundation aimed at preventing other school shootings. The foundation was celebrated with a sermon at a local church. 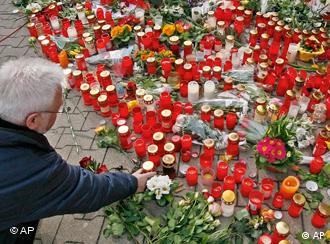 The organisers hope they can prevent future school shootings

The "Foundation Against Violence in Schools" was officially formed on Wednesday in a church ceremony in the small town in the state of Baden-Wuerttemberg in southern Germany. It has been formed as a long-term replacement for a temporary campaign that tried to create better security in schools.

The new charity plans to continue this work, but it also plans to set up emergency phone lines manned by trained psychological advisers for students and parents, as well as to finance advanced courses for teachers. Heribert Rech, interior minister for Baden-Wuerttemberg, is the patron of the foundation. 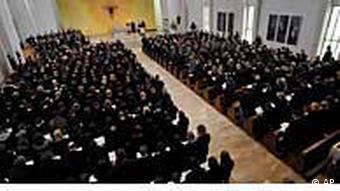 16 people were killed in the massacre

Survivors of the massacre, which took place on March 11 this year, spoke prayers at the service, asking for the strength to change society. "We do not act out of grief or anger, but out of a love for life," said Gisela Mayer, the mother of one of the victims.

Hardy Schober, chairman and father of a girl killed in the massacre, wants to create "a solid basis" for remembering the victims of the shooting and to make students safer in future. The ultimate aim was to make to sure that no school massacre would ever occur in Germany again, Schober said.

The foundation aims to collect one million euros ($1.5 million) in the next year, and Schober reported that it had already received 100,000 euros in donations.

The school massacre at the Albertville school in Winnenden claimed 16 lives, including that of its 17-year-old perpetrator, who shot himself. Tim K. was a student who had graduated from the school a year earlier.

The father of a teen who killed 15 people in a rampage will likely face charges of involuntary manslaughter for leaving the murder weapon unsecured. Families of the victims have demanded he pay for this negligence. (12.11.2009)