Savchenko lawyer: ′It′s getting more and more absurd′ | Europe| News and current affairs from around the continent | DW | 16.08.2015

Savchenko lawyer: 'It's getting more and more absurd'

Ukrainian army pilot Nadezhda Savchenko has been in prison in Russia since 2014. She stands accused of murdering two Russian journalists. Her lawyer Ilya Novikov talked to DW about her trial. 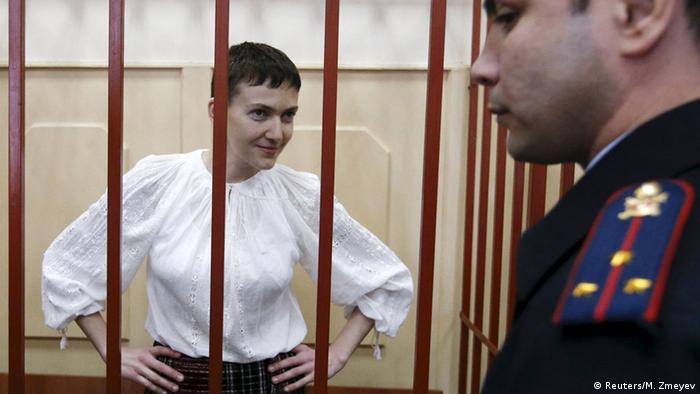 DW: Mr. Novikov, how far along is the trial?

Ilya Novikov: On July 30, when the preliminary hearings were supposed to take place, I filed a motion to move the trial to Moscow. I thought the application would take maybe five or six days to process, but since then I've heard nothing. The judges in this case are insisting on sticking to all the formalities, so the motion was first translated into Ukrainian. Then they waited the 10 days that Savchenko has to object to the motion, even though the motion came from the defense team and the defendant was in favor of it from the beginning. The deadline expires on August 15. Then, the court in Rostov will decide whether or not to move the trial to Moscow.

Why do you want to move the trial to Moscow?

There's a formal reason why the case is being heard in Rostov. That's where, according to the prosecution, Savchenko is supposed to have crossed over the border from Ukraine. However, we're coming at this from the perspective of meaningfulness. The law stipulates that a higher court can move the trial if some of the people involved do not come from the region. In our case, neither the victims, the witnesses nor the experts live in Rostov. Rostov is the worst place in Russia for such a trial. It's a small Russian border town, a place people come to when they are going to war, or coming back from war.

At the end of July, officials declared the highest security level for the preliminary hearing. Why should Russia bear these high costs? There's also the risk that one of the activists from the so-called Luhansk People's Republic will attack Savchenko's family. They're not being protected around the clock. Besides, Rostov is much harder for the press to reach, especially foreign journalists. The courtroom there is very small, and the city is far away. Despite this, I don't think the court will approve my motion to move the trial to Moscow.

Savchenko is being charged with the killing of two Russian journalists. You recently said that there is a video showing Savchenko in a Russian prison at the exact moment that the two journalists were shot. In addition, Savchenko's mobile phone records place her far away from the scene of the killings. Has the court taken this evidence into account?

The court hasn't seen the evidence yet. We got it when the investigation was being wrapped up but the evidence wasn't yet allowed to be admitted. The court will see it, though. We will apply to have experts go over the evidence, and if the court rejects this - as I assume it will - then it will be a clear signal that the court is biased. If the court allows it, then we will keep a very close eye on the experts to make sure they do everything correctly. In this case, they will confirm our argument.

When do you think there will be a verdict?

I don't think the trial will last longer than two weeks. If we start next week as scheduled, then it will likely be the end of August or the start of September.

What is your goal?

We don't think she'll be acquitted. We know the Russian legal system too well to expect that. In controversial cases where politics is at play, the control comes directly from above. So despite all the evidence, we are not expecting for Savchenko to walk free. But it is our goal to create enough international pressure that she may be freed after the verdict is handed down.

What do you make of the prosecution's case?

I can't really judge. In the first statements we heard, there was talk of data from Savchenko's phone, as well as her own notes. But this didn't come up again in the most recent statements. The charge of murder of two journalists was amended to include illegal crossing of a state border. That's a clear sign about how little the prosecution has to go on. It's getting more and more absurd.

How is Savchenko doing? What kind of conditions does she have in prison?

Her health is good. She's feeling upbeat. She likes it here in the south better than in Moscow. Here in southern Russia, people understand Ukrainian. No one is trying to discriminate against her for her nationality. She's waiting impatiently for the trial, to be able to tell her story in public. And we, her defense team, are waiting for this as well.

Ilya Novikov is one of the lawyers for the imprisoned Ukrainian military pilot Nadezhda Savchenko.